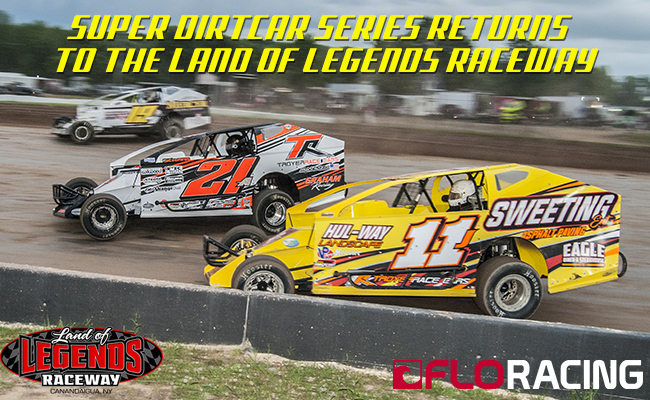 Heavy hitter and veteran Big-Block Modified driver Alan Johnson has the most victories in Series competition at the Land of Legends with 6 wins to his credit. Johnson won the very first Super DIRTcar Series race in Canandaigua, NY in 1976. AJ Slideways is still picking up victories to this day and competes for weekly points at Land of Legends. Competitors will surely take note of which Heat Race Alan Johnson lines up in.

The last Super DIRTcar Series race at Land of Legends Raceway was in 2016 and Tim Fuller drove to victory, making it his second Series win at the track. That 2016 trip to Victory Lane broke a winless streak that stretched all the way to 2012 for Fuller. Thus far in 2018 Fuller picked up a Billy Whitaker Cars & Trux Fast-Time Award at Albany-Saratoga Speedway and has steadily become a factor in the Series Championship chase.
Super DIRTcar Series regular Erick Rudolph has slid up into the fourth position in points. His father Charlie Rudolph won two Series races at the Land of Legends Raceway in 1986 and 1988. Erick Rudolph is poised to grab a victory and move up into the top three in the standings.

All these storylines and more will play out at the Land of Legends Raceway on Thursday, July 5 at 7:00 PM. General admission for adults is $25, Seniors $23, youth $5, and 5 and under are free with an Adult Admission ticket. Reserved seating is an additional $2. The Big-Block Modifieds of the Super DIRTcar Series will be joined by the Empire Super Sprints. +If you can’t make it to the event, log on to FloRacing and pick up your subscription today. You’ll have access to a live video stream of the race.