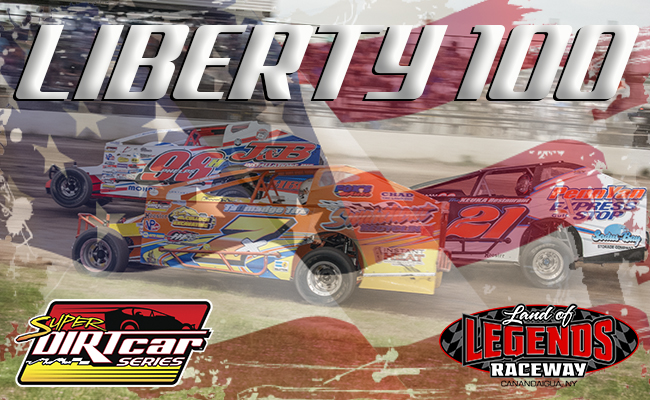 CANANDAIGUA, NY – The stars and cars of the Super DIRTcar Series have pounded around the Canandaigua, NY dirt oval nearly every year since 1976. Forty-five Super DIRTcar Series events have been completed at Land of Legends Raceway, with Hoosier Racing TIre Weekly Championship competitor Alan Johnson leading all drivers with six Series wins. The Championship Points standings are as tight as ever at the top so race fans can expect fireworks on the track well before the fireworks light up the sky.

Defending and eight-time Series Champion Matt Sheppard has a slim lead on Mat Williamson and Billy Decker. So far Sheppard has picked up a win at the DIRTcar Nationals at Volusia Speedway Park as well as the first point-paying show, the Thunder in the Thousand Islands 100 at Can-Am Speedway. Sheppard’s lead is only by twenty-one points.

Mat Williamson has had some significant highs and lows already this year. In Championship Points races Williamson in the Buzzchew Racing No. 88 has two podiums and an eighteenth. A win is just around the corner and the team is happy with our they bounced back at The Big Show 11 after a difficult outing at Weedsport Speedway.

Meanwhile, Billy Decker has quietly kept himself in contention and sits in third place. Decker returned to Gypsum Racing in his familiar crimson red No. 91. He started the year out with a win in the first night of DIRTcar Nationals but has yet to return to Victory Lane.

Those drivers and many more like Erick Rudolph, Demetrios Drellos, Larry Wight, Jack Lehner, Jimmy Phelps, and Ryan Godown will be on hand to fight for the $7,500 grand prize.

Racing starts at 7:00 PM on Thursday, July 4 and July 10 has been named the rain date for the event it is needed. $40 grants access to the pit area while $27 gets you in the grandstands. Race fans six to sixteen years old are only $5 with five and under are free.

The 50/50 raffle benefits the Disabled American Veterans (DAV) Chapter 4, so be sure to bring some singles for raffle tickets.

If you can’t make it to the race track, be sure to tune in with our live streaming partners FloRacing.