MALTA, N. Y. – July 11, 2012 – After a fast-paced 100-lap neck-and-neck battle with Brett Hearn, Bobby Varin came out on top to win round four of the Super DIRTcar Big-Block Modified Series, part of the Big Show 4 at Albany-Saratoga Speedway.

Varin took advantage of heavy lapped traffic in turn four of lap 77 to overtake Brett “the Jet” Hearn and maintained the lead, fending off multiple challenges made by the No. 20 driver.

The first laps seemed to speak in Hearn’s favor as, after drawing the pole position, he fought off early challenges from other frontrunners to build a strong lead. When he reached traffic in lap 37, Hearn stunned the crowd in the packed grandstand as he expertly wove around lapped cars, sometimes two or three deep. He seemed determined to rise victorious at The Big Show, an event he participates in both as driver and promoter.

However, Varin, then in second place, mimicked Hearn’s maneuvers as they circled the tight four-tenths-mile oval, steadily gaining ground.

A yellow flag in lap 42 brought the pack together, and on the restart Varin and Hearn shot forward side by side, neither budging, for an entire lap until Hearn finally powered ahead to reclaim his lead.

Only 10 laps later, leaders reached traffic again, Hearn ducking and weaving, and Varin ardenly pursuing. With the rest of the race going caution-free, the frontrunners were left to battle both each other and lapped cars as they made their way around the track.

Hearn faced frequent challenges from follower Varin, but was able to defend against then until slowed by traffic in lap 77.

Varin powered ahead, showing that his skill navigating the crowded track rivaled that of “the Jet” as he increased his lead over Hearn. Crossing the finish line eight car lengths ahead of Hearn, Varin claimed his first Super DIRTcar Series win this season.

“I love long races in general – 50-, 75-, 100-lappers – they’re what I like to run. In the 35-lappers, you can’t quite get your rhythm in time,” Varin said. “Our setup and the driver ability, tire maintenance, and a lot of other factors come into play in the longer races that aren’t necessarily a factor in the shorter races.”

Although Varin admits that lapped traffic helped him to make the move around Hearn that propelled him to the top spot, he said he would have liked to run his No. 97 at full speed.

“It helped and it hurt,” Varin said of the traffic he encountered frequently during the race. “When I’m going around there babying and tendering the throttle when we really had quite a bit faster of a racecar, that’s really a difficult thing to do.”

Although promoter and driver Hearn, finishing second, could not bask in a first-place triumph for the night, he did not leave the track disappointed. The heavily lapped traffic may have made for what seemed like a slow race from Varin’s seat, but from the grandstand seats it made for the sort of exciting side-by-side, nose-to-nose racing action that brought fans to their feet. 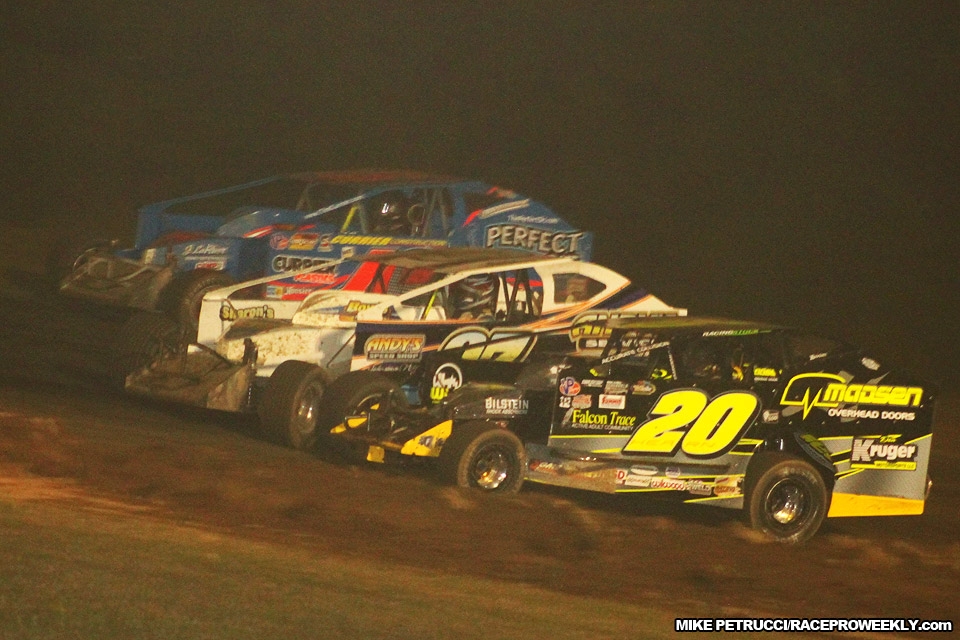 “My main priority was that it was a good, entertaining race, and I think it was exactly that,” Hearn said. “I’m super happy with the way the car handled, and I thought we had a great race and a great show. It’s great because a lot of people are going away thinking, ‘Wow, that was really cool.’”

Rounding out the top five for round four of the Super DIRTcar Series are Stewart Friesen in third, Billy Dunn in fourth, and Vince Vitale in fifth.

It’s not too early to get your annual Super DIRT Week tickets. Super DIRT Week gets underway Wednesday, Oct. 3, and continues through Sunday, Oct. 7, at the New York State Fairgrounds. For tickets, go to www.DIRTcar.com/tickets or call 315-834-6606.