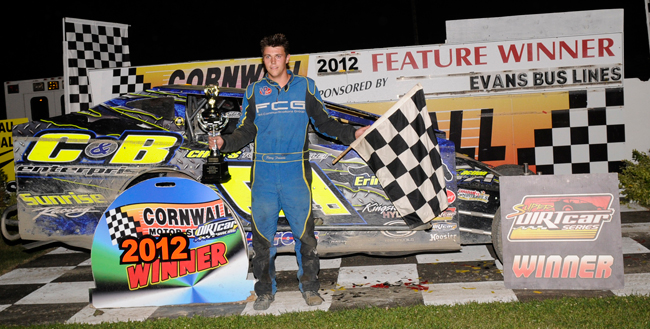 In his 01 Canadian Tire MotoMaster Sylvania Dodge, Raabe left his racing heroes, Brett “the jet” Hearn and “the doctor” Danny Johnson, in the dust and successfully battled off challengers Carey Terrance, Billy Dunn, and Mario Clair for the final victory at Cornwall Motor Speedway.

“This win is pretty big for us,” said the 21-year-old Raabe. “It’s hard to get out there and get yourself known unless you win some of these series races. When you’re at Cornwall will a small block against the Big Blocks, it’s pretty special.”

Although this is Raabe’s first series win, the young driver’s record is not bereft of accomplishments. He entered the Modified fold two years ago, but before that he raced Sportsmans, becoming, in 2008 at the age 18, the youngest Mr. DIRTcar Sportsman Modified Series Champion. The next year, he became the youngest two-time consecutive champion in the same series.

Nonetheless, Raabe had his work cut out for him at Sunday’s event. Drawing the third position in the starting line-up, he maintained third at the green flag, but was soon passed by Johnson in his 27J Page Trucking-Hoeoye Auto Parts-Wast Management/Bicknell entry.

Raabe, unwilling to give up his position without a fight, caught up with Johnson in the second turn of lap 2, and by the fifth lap was inching toward frontrunner Bobby Herrington. Herrington held steady, and, in lap 9, Raabe once again fell behind four-time Super DIRTcar Series Champion Johnson.

Johnson sped ahead, and, with Herrington weaving between lapped cars into lap 11, Johnson used lapped traffic to help propel him to first. However, the congestion soon became his downfall as a turn-one collision in lap 14 created a multi-car pile-up, taking Johnson and Hearn to the pits.

Herrington led the restart with Raabe in second and, in lap 25, Raabe finally closed in on the leader and passed him. For the remaining 75 laps, Raabe maintained the lead, outlasting five cautions and restarts and fighting off a last-minute challenge from Clair in the final laps.

“It’s definitely exciting, anytime you win. It doesn’t matter whether you’re in a Sportsman or a Modified,” said Raabe, who attributes his success to his car and his team. “It was a pretty good race car all around. The guys made some great calls on it.”

Raabe, perhaps an underdog compared to some of the veterans on the track Sunday, also said the small, quarter-mile oval and the lack of a home-track advantage may have helped pave his and others’ entry to the top ten.

“We don’t run Big Blocks here weekly,” Raabe said. “Anytime you go to a Big-Block series race where they race weekly Big Blocks, they have a huge upper hand and that’s not the case here at Cornwall. So, that’s probably why you see some mix-up there in the top ten.”

Rounding out the top five were #22c Clair in second, #66x Terrance in third, #77x Dale Planck in fourth, and #23 Laurent Ladouceur in fifth. Although not breaking the top five, Johnson and #20 Hearn were able to make reasonable post-collision comebacks, with Johnson placing sixth and Hearn tenth.

Second-placer Clair started the night strong, setting the fast time in time trials with a 12.886-second lap. Crew member Rejean Darcy, who spoke and translated for francophone Clair, said this early success was a pleasant surprise.

“When you see names like Brett Hearn, Matt Sheppard, and Danny Johnson, you don’t imagine that you could make a better time than those guys,” Darcy said. “When you see on the board that you’re first overall, well, it’s unbelievable.”

Clair, fourth in the feature line-up, reached second place in lap 23, but was passed by Terrance in lap 42 and started to fall behind. By lap 90, he had worked his way back and gave frontrunner Raabe a run for his money in the last five laps of the race before finishing second overall.

“It was a big race for Mario, a big race for us,” Darcy said. “The setup for the car is very good. It’s perfect. With a race, that’s all you have to do.”

The fourth race in the Super DIRTcar Series, Brett Hearn’s The Big Show 4, is Tuesday July 10 at the Albany-Saratoga Speedway in Malta, N. Y.

It’s not too early to get your annual Super DIRT Week tickets. Super DIRT Week gets underway Wednesday, Oct. 3, and continues through Sunday, Oct. 7, at the New York State Fairgrounds. For tickets, go to www.DIRTcar.com/tickets or call (315) 834-6606. For the latest updates about the Super DIRTcar Series, “like” DIRTcar Racing on Facebook or follow the Twitter feed, @SuperDIRTcar.