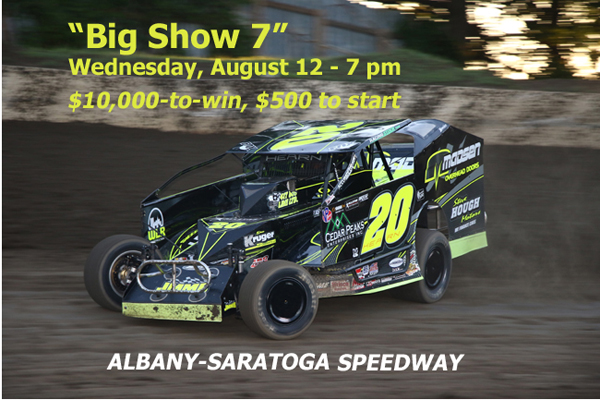 MALTA, N. Y. – August 9, 2015 – The Super DIRTcar Series Big-Block Modifieds take the green Wednesday, August 12 at Albany-Saratoga Speedway in a make-up of Brett Hearn’s Big Show VII, which was rained out in July.

Hearn has the duel role of competitor and promoter for the 100-lap event at the “Great Race Place”, where he has eight regular-season wins this season.

Along with fellow Super DIRTcar Series regular Peter “Batman” Britten of Brisbane, Queensland, Australia, Hearn is having an outstanding season at Albany-Saratoga. Both drivers are likely candidates to pocket the $10,000 winner’s check.

“This is too big a race to scratch, so we worked out a date to keep the tradition going,” Hearn said. “The track has been excellent – smooth and fast. I think we might have a record car count Wednesday night.”

Another local favorite quite likely to have a lot to say about who carries the “Big Show VII” checkers, is current Albany-Saratoga point leader and 12-time track champion Kenny Tremont Jr. – the “Sand Lake Slingshot”. Tremont Jr. has six feature wins at Albany-Saratoga this season.

Sheppard, driver of the FX Caprara/Mohawk Northeast No. 9h,recorded his 4th series win last Thursday at Weedsport. Phelps, his Heinke-Baldwin racing teammate, was second for his 7th top-5 finish in 12 starts.