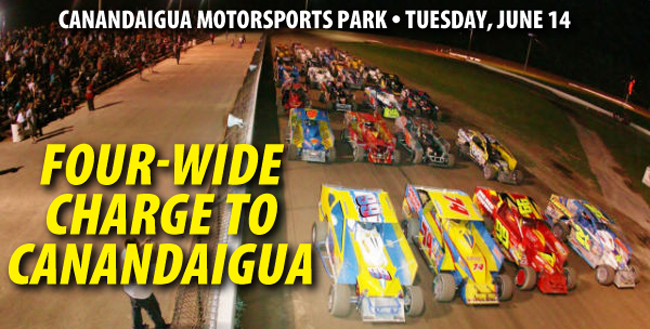 Jeremie Corcoran, who took over Canandaigua Motorsports Park (formally Canandaigua Speedway) during the off-season, has already brought new life back into the famed speedway.

Under Corcoran’s leadership Matt Sheppard, Billy Dunn, Danny Johnson and Rich Scagliotta are just a few drivers who have changed their Saturday night home to Canandaigua for the 2011 season. Fans and drivers alike have been rewarded for their loyalty to the fast half-mile as the Canandaigua track crew has given them fantastic track conditions.

The night will be capped off with a 64-lap feature for the Super DIRTcar Series. All 64 laps of the $3,000 to win event will be run under green flag conditions.

The Canandaigua sportsman and street stocks will also be on the card. Racing begins at 7 p.m.

Fuller Moving Up – With his win at Rolling Wheels Raceway in the Super DIRTcar Series opener, the 19th of his career, Tim Fuller has surpassed Tim McCreadie for ninth on the all-time Super DIRTcar Big-Block Series win list.

Willix Making Due – The 2010 Super DIRTcar Big Block Series Rookie of the Year, Lance Willix, entered the first race of the 2011 Series with an unfamiliar car. Willix has piloted the zero3 modified normally driven by Zach Aubertine at Can Am Motorsports Park on Friday nights. Aubertine, who crew chiefs for Willix, offered his car to Willix after Willix’s primary engine was damaged at Glen Ridge Motorports Park earlier in the season. Willix has a new motor on order and hopes to have it in time to compete at Canandaigua.

Higbie a Busy Man – Western Pennsylvania modified star Del Rougeux’s business is booming. The business is going so well that he doesn’t have any time for racing right now, so Rouguex formed a partnership with his fabricator, Jerry Higbie, to drive his #20D Big-Block Modified in select specials throughout the year, starting at All-Star Weekend. Higbie, who runs his own equipment two nights a week on top of his fabrication business, has also began dabbling in the chassis building business and has been running his own chassis weekly at Orange County Fair Speedway.

Tomkins Back on the Road – After long-time car owner Doug Dullen sold his racing operation in the winter in 2010, 2004 Super DIRTcar Big-Block Modified Series champion Gary Tomkins had to scrounge rides together to compete at Series events to make it through the 2010 season. Now, Tomkins has partnered up with renowned car owners Ray and Debbie Tuit to make another assault on the Super DIRTcar Series. Tomkins finished second the last time the DIRTcar Series raced at Canandaigua.

Tour First Timers – Four drivers are planning on following the entire Super DIRTcar Series for the first time in their careers. Canandaigua regulars Peter Britten, Tim Currier, and Rob Bellinger have all announced their intentions on following the series as well at Connecticut hot-shoe Dan Humes.