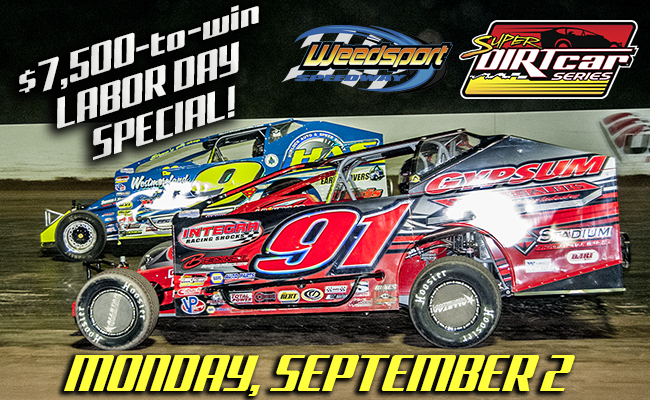 WEEDSPORT, NY – Aug. 28, 2019 – In the small New York town of Weedsport lies the historic three-eighths-of-a-mile dirt oval where all the legends of Big Block Modified racing have made their mark. The Super DIRTcar Series has stopped twice at Weedsport Speedway in 2019 with eight-time Series Champion Matt Sheppard and his rival from Ransomville Erick Rudolph splitting the pair of 100-lappers.

Sheppard and Rudolph carry their points battle into Weedsport Speedway on Labor Day, Monday, Sept. 2. The 100-lap, $7,500-to-win Feature presented by Lane’s Yamaha is the third in a triple-header with Lebanon Valley (on Saturday) and Utica-Rome (on Sunday). The intensity and battles will no doubt be fierce by the third consecutive day of competition.

Third in points is Mat Williamson, who splits time in the Buzz Chew No. 88 and his family-owned No. 6. In the first Series race this year at Weedsport, Williamson struggled on the slick track. He and his team worked hard for redemption and pulled off a top-three finish.

Rudolph’s average finish in Series competition at Weedsport in 2019 is 1.5. With a victory and a second under his belt already, he may be the favorite going in.

Rookie of the Year leader Ryan Godown has had a crash course in Super DIRTcar Series race tracks this year. With the third Series race coming up at Weedsport, he’s thankful to have vital notes on the track. Godown, from Ringoes, NJ, is living his dream of following the Series. He’s raced his way from being a top-15 car to competing for victories.

Major questions remain for the 2019 season. Can Gypsum Racing’s Larry Wight and Billy Decker make a run for the Championship? Will Mike Mahaney and Peter Britten start getting the finishes they deserve? Can Demetrios Drellos and Jack Lehner take the Rookie of the Year fight to Ryan Godown? Will The Baldwinsville Bandit Jimmy Phelps or The Doctor Danny Johnson find their way to Victory Lane in 2019?

The Weedsport oval is a favorite for many which will add spice to the field. Other drivers expected to be in the field will be Pat Ward, Alan Johnson, Chris Hile, Tim Sears, Ron Davis III, Dave Marcuccilli and Super DIRT Week and Super DIRTcar Series sponsor Billy Whittaker himself.

Also in action is the DIRTcar Pro Stock Series. Fifteen drivers have competed in both Pro Stock Series races so far with Canadian C.D. Beauchamp and Rick Duzlak picking up the wins. A stout field is expected to be on hand looking for the $1,000 top prize.

The Empire Super Sprints are also on the card, vying for a $2,000 winner’s share themselves.

Don’t forget, if you can’t make it to the race track, tune into live streaming at FloRacing. Plus follow us on social media for live updates, photos, and videos from the track. Check us out on Twitter, Facebook, and Instagram.