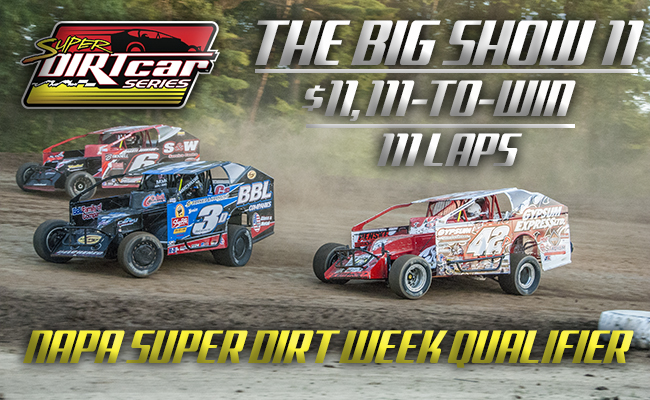 MALTA, NY — June 6, 2019 — Few races have been able to generate an attitude and identity as quickly as Brett Hearn’s The Big Show, and on Tuesday, June 25, the event celebrates its 11th running with host Albany-Saratoga Speedway and Brett Hearn increasing the winner’s share to $11,111 and the lap count to 111. Plus, the winner also receives a guaranteed starting spot at NAPA Auto Parts Super DIRT Week XLVIII’s Billy Whittaker Cars 200.

The Big Show is known for big car counts, big action and the best Super DIRTcar Series Big Block Modified drivers in the country. Last year Stewart Friesen capitalized on Matt Sheppard’s late-race misfortune to cash in on the mid-week payday with HBR’s Jimmy Phelps and Max McLaughlin following close behind on the podium.

Every Heat Race and every Feature provides vital Super DIRTcar Series Championship points, as proven last year when the Championship came down to the final race at the Can-Am World Finals between Matt Sheppard and Erick Rudolph. So far in 2019, Sheppard and Rudolph have traded wins in the first two meetings at Can-Am Speedway and Weedsport Speedway. Larry Wight rides second in points and hopes to break up the Sheppard/Rudolph run with a win of his own.

The Super DIRTcar Series has a dynamic mix of young guns and veterans. Rookie of the Year contenders like Ryan Godown, Jack Lehner, Demetrios Drellos and Marcus Dinkins are all looking to write their names into Big Block Modified History books with a stunning win. But they’ll have to beat the best like Brett Hearn and Danny Johnson. Powerhouse race teams like HBR and Gypsum Racing will bring the likes of Jimmy Phelps, Billy Decker, and Larry Wight to bare. Believe us when we say it’s going to be big.

Mat Williamson is starting to get into a groove with his sharp-looking Buzzchew Racing No. 88. Watch for him to break into the top 3 in points. He currently sits fifth in points. Mike Mahaney in his new yellow and black No. 35 was fast and racy at Weedsport on Memorial Day. He’ll be contender off the trailer.

Not to be overlooked is Series regular “Batman” Peter Britten who has called Albany-Saratoga his Friday night race place and where he has already visited victory lane. Others that call the Malta, NY, dirt oval home like Marc Johnson, the legendary Kenny Tremont, Matt Delorenzo, Jessey Mueller and Keith Flach will be up for the challenge.

Brett Hearn is clearly excited to be promoting his 11th Big Show.

“The Big Show 11 is not just another mid-week race,” says event organizer and champion race car driver Brett Hearn. “Our goal is to make it a memorable evening of high-speed excitement and entertainment for both the fans and the competitors. We work hard to give everyone an enhanced motorsports experience.”

The $1,000-to-win “Pick-the-Pick” fan contest is back! From 4 PM to 6 PM, fans can choose who they think will be the top five drivers in Group Time Trials. The $1,000 jackpot is to be split between anyone who picks all five. Fans that get four out of five will be granted a free pit pass upgrade.

General admission tickets are $25 with reserved top row tickets going for $35, plus premium VIP seating for $75 to $90.

Get your Big Show 11 tickets right here. If you can’t make it to the race track, be sure to tune with our partners at FloRacing for live HD streaming video.