How Dirty are You? 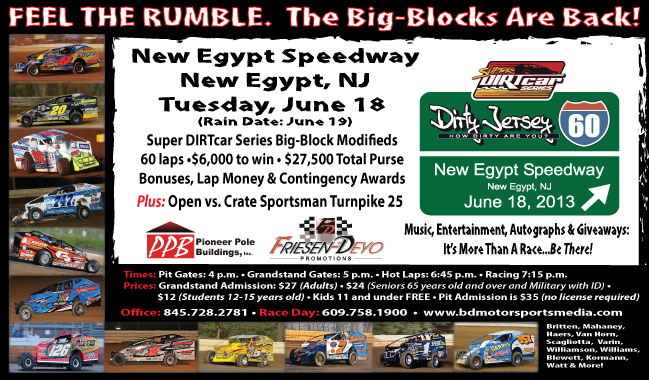 NEW EGYPT, N. J. – Tuesday, June 11, 2013 – The Garden State is gearing up for the Super DIRTcar Series as the premier Big-Block Modified tour prepares to take on New Egypt Speedway for the first time since 2007. Already some popular racers from the area are confirmed for the Pioneer Pole Buildings Inc. “Dirty Jersey 60,” ready to challenge series regulars at the Tuesday, June 18, race.

“We learned some stuff at Rolling Wheels, got a little acclimated to the Hoosier tires,” Godown commented. “You have to tighten up the race car a little more than with the tires we usually run.”

The track at New Egypt, Godown said, typically makes for a great race, whether from the driver’s seat or the grandstands.

“I think you’re going to get a couple lanes moving, and it’s going to be a great show. I honestly think it’s going to be the best show there all year,” said Godown, who will be piloting the 747 at Tuesday’s event. “It’s going to be three-, four-wide racing all night long. When it slicks up a bit, it gets multiple grooves – not just right around the bottom or the top – you can cross, you can go through the middle.”

Pauch, whose long career in dirt track racing has brought him face-to-face with Super DIRTcar Series stars many times, isn’t just looking forward to racing with them again.

“It’s neat to see everybody. I really don’t see them that much. This time I don’t have to go out of my way to see them because they’re coming to my home,” said Pauch, who hails from Frenchtown, N. J. “The competition is stepping up, so the next thing is to step up with it and see if we can beat them.”

“It’s definitely going to be one of the best events of the 2000s era,” said Big-Block Modified driver Stewart Friesen, who not only holds the current points lead in the Super DIRTcar Series after winning the DIRTcar Hall of Fame 60, but also forms a part of the Friesen-Deyo Promotions team behind the Pioneer Pole Buildings Inc. “Dirty Jersey 60.” “It’s definitely going to be a star-studded event. We’ve got the best guys all up and down the East Coast.”

To treat what they expect to be among the best Modified fields in recent years, promoters Friesen and Brett Deyo have organized a pre-race competitor picnic. Sponsored by Dietz & Watson, ERK Steering, and Danny’s Pizza Pizzazz, the picnic will provide hot dogs, snacks, and beverages at no cost to drivers, car owners and crew members.

“It’s something different,” said Deyo. “We like to make it something that’s memorable on the fan side and also on the competitor side.”

For fans, Deyo and Friesen are planning a number of unique giveaways, midway attractions, and entertainment off the track. Kids can try their hands at racing at an RC track in the midway area, and may even have the opportunity to challenge their favorite drivers. Collectible sales, pre-race musical entertainment, and a driver autograph session add to the festivities for what Deyo said is becoming a destination race.

“For all of us, this is a really big spotlight. New Egypt is such a state-of-the-art race track,” Deyo said. “People walk in there for the first time and they can’t believe how modern it is – the lighting, the seating.”

Fans traveling far and arriving early for this destination race also have their chance to compete with a tailgating contest. The group judged to have the most creative tailgate setup, perhaps paying tribute to their favorite driver, will receive four free passes to the event.

For the latest news and updates about the Super DIRTcar Series, including live race notes, follow @SuperDIRTcar on Twitter and “like” the DIRTcar Racing Facbeook page.