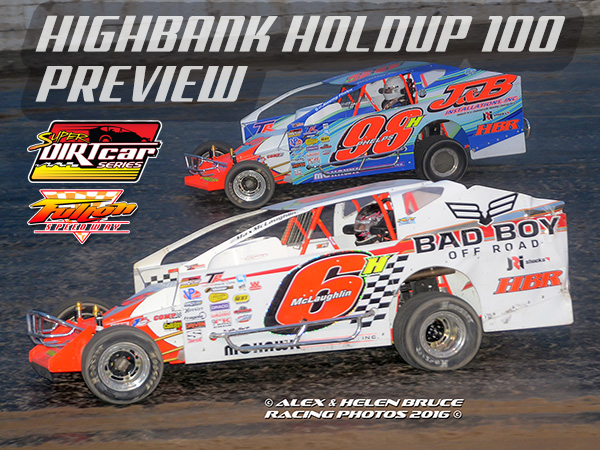 CONCORD, N.C. – April 5, 2018 – The stars of the premier Big-Block Modified series of the northeast, the Super DIRTcar Series, are anxious to return to action in the first series race of 2018 north of Florida. After a successful DIRTcar Nationals at Volusia Speedway Park in February, the series will start awarding championship points at the Highbank Holdup at Fulton Speedway. Which Big-Block Modified driver will draw quickest at this year’s Highbank Holdup 100 and take home the loot? Get to Fulton Speedway on Saturday April 28 to find out.

Fifteen of the best dirt track racing drivers in the country have committed to racing for the Super DIRTcar Series Big-Block Modified championship in 2018. Defending Series Champion Matt Sheppard has never won a Super DIRTcar Series race at Fulton Speedway and is looking to reverse his Fulton fortunes. Sheppard needed some time to get up to speed in Florida, but in the third feature he secured a checkered flag after passing veteran Danny Johnson in lapped traffic.

The always fast and smooth Billy Decker has won the three consecutive Super DIRTcar Series races at Fulton Speedway. The Mike Payne Racing hot shoe has had great success at Fulton Speedway throughout his career and fans and drivers expect him to roll off the trailer as a top contender. Decker finished in second place in points last year having adjusted to his new team and chassis. This year Decker and company will be running on all cylinders and pushing for a championship.

Another Highbank Holdup contender, Larry Wight is primed to defend his home turf at Fulton Speedway. Wight in the no. 99L always brings the fans to their feet with his aggressive style and flare on the high banks. Don’t be surprised if the Phoenix, NY native puts the Gypsum Racing Big-Block Modified in victory lane.

Fulton Speedway is a legendary and exciting race track that promotes three and four-wide racing from start to finish. The dirt oval is cut into the ground like an ice cream scoop. Fans are treated to a unique view of the racing as they look down into the bowl-like track. Some drivers slam into the corners, kicking up clay along the high-line’s cushion, and others will take the short way around, digging low through the corners, grasping for traction. These conditions make for excellent competition that dirt racing fans everywhere will not want to miss.

Don’t forget, the Highbank Holdup Weekend is a two-day event. Your first chance to see the Super DIRTcar Series Big-Block Modifieds on track will be on Friday night for two hot lap sessions. Also in action Friday night are the DIRTcar Sportsman Modifieds in support of the Empire Super Sprint 360 sprint car show. It’s the season opener for the Central Region DIRTcar Sportsman Modifieds as they begin their 2018 championship campaign.

Tickets for adult fans are $25 while young fans ages 6-18 are only $5. Gates open at Fulton Speedway Saturday April 28 at 5 PM. Additionally, the SUNY Canton Sportsman and Billy Whittaker Cars & Trux Late Models round out the bill. If you can’t attend the Highbank Holdup 100, you can stream the race live on FloRacing with a monthly subscription.