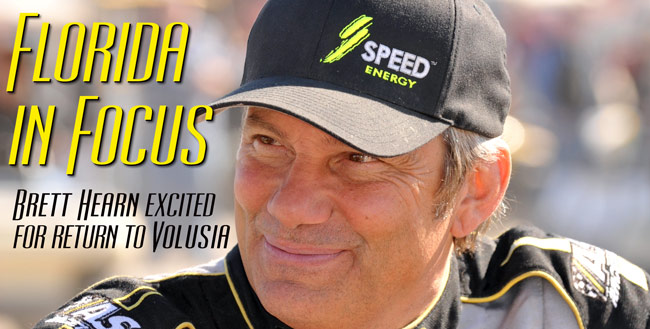 BARBERVILLE, Fla. – Jan. 31, 2012 – There’s no place Brett Hearn would rather be during the month of February than the Sunshine State.

“Oh, yeah, I always look forward to Florida in February,” said Sussex, N.J.’s Hearn, who will migrate south for the 15th consecutive year to compete in the Super DIRTcar Series Big-Block Modified portion of the 41st UNOH DIRTcar Nationals Presented by Summit Racing Equipment on Feb. 22-25 at Volusia Speedway Park. “I don’t know what I would do if we didn’t make the trip. I enjoy it and everybody on my team enjoys it.”

Much of Hearn’s affinity for his annual working vacation, of course, derives from the sparkling performance record he’s put together in Florida Big-Block Modified action over his legendary career. He’s the Northeast open-wheel division’s resident Mr. Florida, a winner of a record seven Super DIRTcar Series Florida Tour points championships and 20 features. No other driver has won more than three titles since Big-Block Modifieds began contesting a mid-winter Florida series in 1978, and Hearn’s career victory total nearly doubles that of Danny Johnson’s second-best figure of 11.

Hearn, 53, celebrating triumphs in Florida has become a constant, especially at Volusia, where the vast majority of his checkered flags have come. Since 1998, he has won more races during Volusia’s UNOH DIRTcar Nationals Presented by Summit than any other driver – Sprint Car, DIRTcar Late Model and DIRTcar UMP Modified racers included.

Is there a secret to Hearn’s amazing success at the sprawling half-mile oval located less than a half-hour outside Daytona Beach? He said there’s nothing in particular, but he does note that escaping the winter freeze at home for the sunny and warm Southeast serves as a great “motivational tool” for him and his team.

“We all like going down there,” said Hearn, a seven-time winner of the overall Super DIRTcar Series Big-Block Modified championship. “Not only do we get away from the cold, but we’re all Late Model and Sprint Car fans so we get to see those divisions racing when we’re not running. That helps motivate my guys to work harder in the winter time to go down and strut our stuff.”

This year Hearn will once again battle a star-studded roster of DIRTcar Big-Block Modified standouts in four programs during the UNOH DIRTcar Nationals Presented by Summit. The division’s schedule boasts 30-lap features paying $2,000 to win on Wed., Feb. 22, Thurs., Feb. 23, and Fri., Feb. 24, and a 50-lap grand finale offering a $5,000 top prize on Sat., Feb. 25.

Last year Hearn fell short of the UNOH DIRTcar Nationals points crown, finishing second to Friesen by 10 points. But he won once – putting him back in Volusia’s Victory Lane after an uncharacteristic winless visit in 2010 – and finished second (a rare last-lap loss in the series opener at the hands of Friesen), third and fifth in the other headliners.

It was a typically solid week for Hearn, who ranks the Volusia speedplant as one of his favorites.

“I really like it,” said Hearn, who won the 800th feature of his distinguished three-decade-long career in 2011. “It’s always been a really fun, racy, kind of cool place to race. It’s wide, it’s pretty fast, and it has a little bit of an unusual shape, which really mixes things up.

“It’s also deceiving how much engine you can use there. You’re on the gas at that place.”

Hearn will wheel around Volusia in his familiar Madsen Motorsports Teo-Pro No. 20 machine, albeit this year without the Wentworth Construction logo gracing its bodywork for the first time in five years. (“We’re sponsor hunting right now,” said Hearn.) New to his operation will be car chief Matt Hearn, the 23-year-old son of Brett’s younger brother and chassis builder Bobby.

Hearn’s hauler will arrive in the Daytona area several days before the scheduled start of DIRTcar Big-Block Modified action at Volusia, giving him and his crew some “fun time” – probably a stop at Daytona International Speedway, a night spent watching World of Outlaws Sprint Car Series competition at Volusia, a little nightlife in Daytona. Then they’ll unload their car and get down to business running nightly doubleheaders with the dirt Late Model class and soaking up the week’s unique atmosphere.

“There’s two things I really like about (the UNOH DIRTcar Nationals Presented by Summit),” said Hearn, who is eyeing a 2012 schedule focused on the Super DIRTcar Series and weekly DIRTcar-sanctioned racing at Albany-Saratoga Speedway in Malta, N.Y., and Lebanon Valley Speedway in West Lebanon, N.Y. “First, we always have fun when we get to race with the Late Models. As much as anything, we all just enjoy watching those guys race when we’re not, but I think that when we run a combo race with the Late Models it’s a big event. They draw a lot of fans and we draw a lot of fans as well, and when you put all that in one place it becomes pretty electric.

“And second, the fact that people who buy a ticket for the stands can come through the pits (the ‘Free Fan Pit Pass With Every Ticket’ offer) makes the week a lot more interesting. We get to see a lot of more people that might not otherwise come in the pits. Every year I see people I haven’t seen in years who are down in Florida either for the 500 or live down there now.”

The UNOH DIRTcar Nationals Presented by Summit is a 12-night short-track blockbuster that features nightly doubleheaders. In addition to four evenings of competition for the Super DIRTcar Series (Feb. 22-25) there will be six nights of Late Model action (DIRTcar UMP-sanctioned on Feb. 20, 21, 22 and 24 and WoO Late Model Series 50-lap A-Mains on Feb. 23 and 25); the World of Outlaws Sprint Car Series on Feb. 17-19; the UNOH All-Star Sprint Car Series on Feb. 15-16; and the DIRTcar UMP Modifieds on Feb. 14-21.

For more information on the UNOH DIRTcar Nationals Presented by Summit – including special pricing on advance-sale tickets and details of the ‘Free Fan Pit Pass With Every Ticket’ offer that allows fans to get up-close-and-personal with the race teams every night – visit www.DIRTcarNationals.com or call 877-395-8606.

For more information on the Super DIRTcar Series, click http://www.SuperDIRTCarSeries.com.