Hearn Ready to Jump-Start 2014 at Volusia 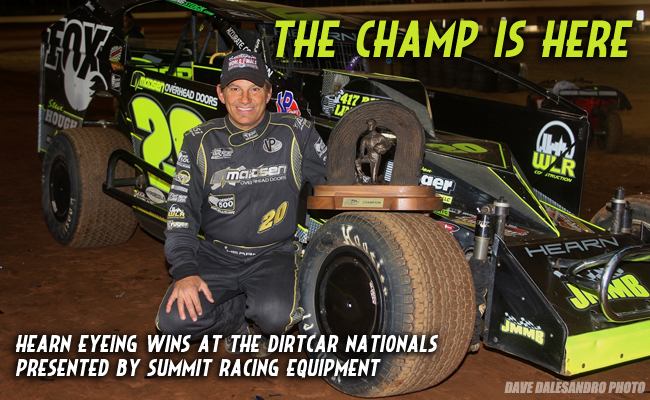 WEEDSPORT, N.Y. – Dirt modified racing legend Brett Hearn seems to raise the bar higher with each lap. The 2014 Super DIRTcar Big-Block Modified Champion from Sussex, N.J., is the only driver with eight series championships, and he isn’t ready to let up.

“It ended with a bang last year, with Eastern States and our performance at World Finals. I feel pretty good about this,” said Hearn in anticipation of February’s 43rd DIRTcar Nationals presented by Summit Racing Equipment, which runs from Tuesday, Feb. 11, through Saturday, Feb. 22, at Volusia Speedway Park in Barberville, Fla. The Super DIRTcar Series roars center stage Wednesday, Feb. 19, when it shares a doubleheader race night with the UMP Late Models Swamp King Championship Race. The nights at Volusia feature the World of Outlaws Late Model Series alongside the Super DIRTcar Series three nights in a row.

As the Super DIRTcar Series teams prepare for their 2014 season, which is marked by one of the most ambitious schedules in years, the mid-winter races at Volusia will prove integral for sizing up the competition.

“It definitely gives us a jump start to the season up here,” said Hearn, whose team has had a busy winter making improvements on the Madsen Overhead Doors No. 20 but has had little chance to see it on the track. “It gives our guys a chance to figure out where our equipment stands.”

The Super DIRTcar Series teams will not be competing for championship points in Florida, and Hearn said the lack of points up for grabs adds a new dimension to the racing.

“It’s all about winning the race,” Hearn said. “You don’t really think of all the things you usually do in a typical points race. You can be more aggressive, and just go out there and race.”

Just a short drive from Daytona Beach, Fla., and Orlando, Fla., Volusia Speedway Park features doubleheaders every night during DIRTcar Nationals presented by Summit Racing Equipment, and each ticket includes a FREE Fan Pit Pass! Fans will have access to the pit area starting at 5:30 p.m. every night to visit their favorite drivers’ pit stalls. Driver pits open at 10 a.m. every morning and grandstand gates open at 5 p.m. For more information or to purchase tickets, visit www.dirtcarnationals.com