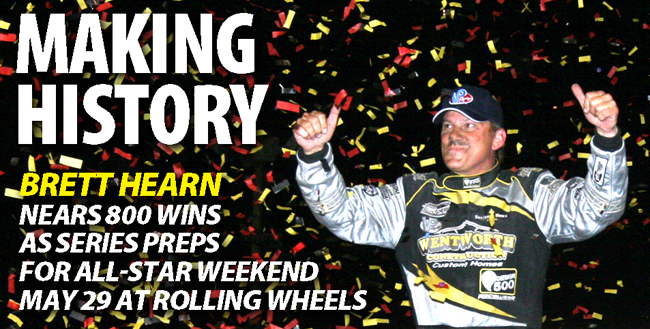 As a racer, the statistics speak volumes. He has seven Big-Block Modified championships with the Super DIRTcar Series. He’s won at 47 different tracks. Even more impressive, he has 793 victories in his career. 793. It’s tough just trying to grasp how one person can win so many races in such a competitive sport. (G.T. Smith photo)

But Hearn is more than just numbers. He’s an innovator. He’s a promoter. And at 52 his passion for racing and winning has never been stronger, which will be evident on May 29  when he and the Super DIRTcar Series kicks off another season during All-Star Weekend at Rolling Wheels Raceway Park in Elbridge, N.Y.

What fuels Hearn, what keeps him coming back year-after-year even better than the last is fear.

“It’s preparation, it’s the fear of failure,” says the New Jersey native. “Because I have that fear I work very, very hard to get ready to do what I do. I take nothing for granted. I really sleep, drink and eat it. I prepare very, very hard for every racetrack I go to. As a team we do our homework.”

After winning the title in 2009, and knowing what he can accomplish historically, Hearn was frustrated in 2010 as he and his Madsen Motorsports struggled with new cars.

“I think I know what I did in 2009 to win the championship,” said Hearn, who will be promoting The Big Show III on June 21 at Orange County Fair Speedway. “Coming out of the gate with multiple top threes, I set myself up to not be beat. Last year I struggled with a car that I never got comfortable with and I was knocking down top 10s, but they weren’t top threes. I really need to race myself and forget about what everybody else is doing. I know what I need to do to win the championship and that is to come out of the gate strong and knock down top threes early in the series and not have to play catch-up later on.”

Many drivers won’t admit they look at statistics, even though everybody knows they do. Hearn is keenly aware of his place in history, and the milestone he can achieve in the very near future.

“I hope I can continue to make the numbers grow,” Hearn said. “We’re seven wins away from our 800th win and that’s a milestone we’ll be looking at this year. I’m really enthused about the way we’ve opened the season and the results we’ve had. As a team our equipment is very good right now. I like the rides I have. I’m not struggling like I was at the beginning of last year with a new car that I didn’t really care for too much and I spent too much time trying to get it to work. I like where we’re at right now with everything. An eighth title would be awesome. That’s what it’s all about, that’s why we do it, that’s why we do it as a team, that’s why Guy Madsen as an owner has two goals, win the championship and win Syracuse. One we’ve done a couple of times, one we haven’t done yet. That’s what this team is all about.”

Even though he’s so close to 800 wins, don’t expect Hearn to waste too much time thinking about them. He still has more work to accomplish.

“I don’t really spend a lot of time reminiscing unless I get with a group of old friends and they start bringing up stories,” he said. “I’m more concerned with how can we can get better? What do we need to build? I’m a person who really prefers to look forward. When the day comes that I hang up my helmet, I’ll go back and look at it and I’ll enjoy thinking about it, but right now every day it’s about going forward, about what’s going to happen next.”

What’s next for the Super DIRTcar Series is the season opener on May 29. Matt Sheppard won the series title last year as well as conquering All-Star Weekend, which was run at Cayuga County Fair Speedway in Weedsport, N.Y. Now at Rolling Wheels Raceway Park, Hearn believes he can win the event for the first time.

“Historically I’ve been stronger and have much more experience at Rolling Wheels than I do at Weedsport so I think the change of venues might help me in that respect,” he said. “And like where I’m at with my cars and the way they’re handling, I have to believe if that track is in the kind of condition it was during Super DIRT Week, I think it’s going to be a spectacular event. I’m going to give myself a better chance to win it than I have in the past.”

Hearn feels he’s as prepared as he’s ever been to start the series season.

“Everything we do from the time we unload at Volusia is about test and prep and practice and preparing for ourselves to be ready when the series comes,” said Hearn, who notched a victory in February during the DIRTcar Nationals at Volusia Speedway Park near Daytona Beach. “A lot of people wonder why I go all the way to Florida to race. For us it’s as much a test session as anything we do. There are no points on the line so you can mess around a little bit, look at what you built over the winter and see what works and what doesn’t work.”

For Hearn, it’s very rare when something doesn’t work. All you have to do is check the numbers.