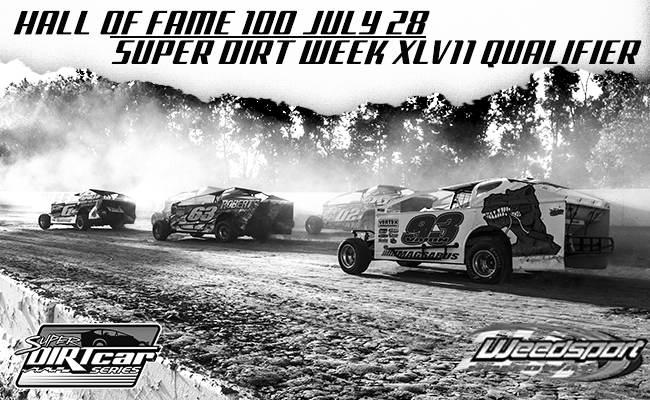 CONCORD, NC – Saturday, July 28 – The Hall of Fame 100 at Weedsport Speedway will award the fourth Super DIRT Week XLVII guaranteed starting position of 2018 on Saturday, July 28. The Super DIRTcar Series is the centerpiece of a huge weekend of motorsports in Central New York. Stewart Friesen and Max McLaughlin have already sewn up their guaranteed starts with Friesen winning Weedsport Speedway’s Heroes Remembered 100 and Brett Hearn’s Big Show X at Albany-Saratoga Speedway. McLaughlin finished second in The Big Show X to Friesen, which meant the guaranteed starting position fell to him. With Stewart Friesen’s NASCAR Camping World Truck Series commitments conflicting with the Hall of Fame 100 date, the field is wide open for a shot at a Super DIRT Week XLVII starting spot.

The Al Heinke-owned Weedsport Speedway is one of the premier dirt track racing facilities in the United States. The track is offering up $10,000 to win the Hall of Fame 100 as well as $500 just to take the green flag. 64 Super DIRTcar Series races have been run on the 3/8-mile jewel of Central New York. The Doctor Danny Johnson has the most Series victories with eleven. Johnson has been on an incredible roll with three podium finishes in a row, including a win at the Land of Legends Raceway. Brett Hearn is coming off his first Series victory of 2018 at Outlaw Speedway and he is the track record holder at Weedsport Speedway. He’ll want to convert that speed into the 100-lap test of endurance if he wants to catch current Championship Points leader Matt Sheppard.

Never count out the HBR stable from crossing the finish line first, especially at their home track. Max McLaughlin has had some difficulties in qualifying over the past two races but recovered with hard-charges to the front. The no. 6H car has passed more cars in the last 200 laps of competition than any other Series driver. Jimmy Phelps on the other hand has experienced the highest of highs and lowest of lows this season. The pilot of the no. 98H was victorious at Utica-Rome Speedway, but spun out in front of the field at Outlaw Speedway, and suffered mechanical damage, prematurely ending his night.

Also keep an eye on Erick Rudolph, who has steadily maintained a top-five position in the points. Rudolph took fourth when the Series last met at Weedsport Speedway in May. The no. 25 is knocking on the door to Victory Lane in 2018.

On Thursday, July 26 long-time Super DIRTcar Series official, historian, and writer, Gary Spaid will be inducted into the DIRT Hall of Fame, kicking off an unforgettable weekend of racing. Friday night many of the stars of the Super DIRTcar Series will strap into their DIRTcar 358 Modifieds for a Series race at nearby Brewerton Speedway. Then on Saturday, the Hall of Fame 100 will go green at Weedsport Speedway. Finally, to cap the weekend, the World of Outlaws Craftsman Sprint Car Series will take on the historic 3/8-mile track. If you can’t make it to the track for the action, the Hall of Fame 100 will be streamed live at FloRacing.com.