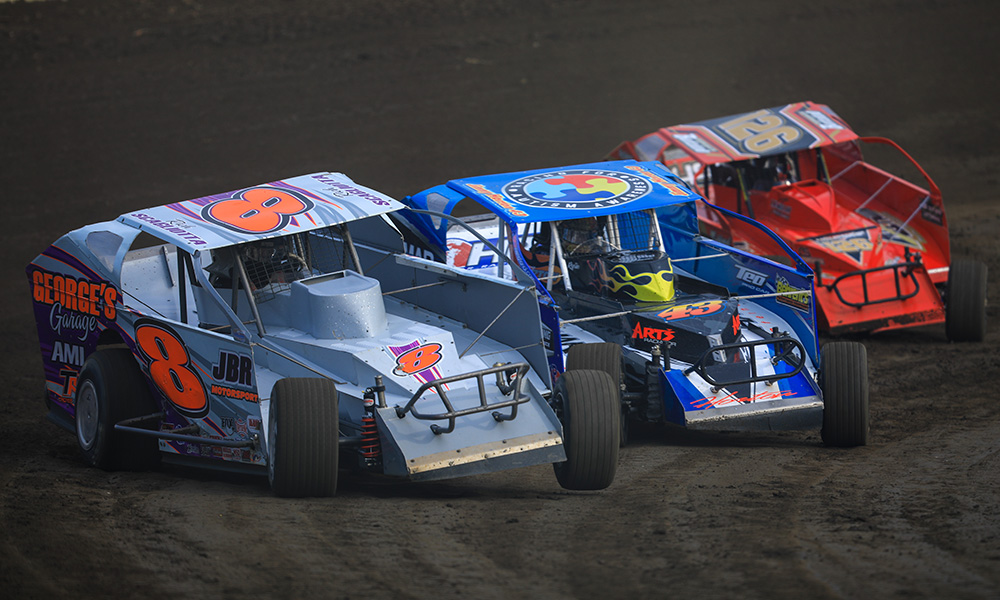 The battle to be king has intensified.

Along with crowning a new King of the Blocks at Bridgeport Motorsports Park, Tuesday, May 3, the event will also serve as the 2022 Super DIRTcar Series championship season opener.

Becoming an instant fan favorite when the Series first visited the 3/8-mile New Jersey track in 2020 due to its high-banked configuration creating exciting side-by-side action, the facility is set to keep those thrills going. Especially with the stout field of drivers planning to attend.

Eight-time and defending champion Matt Sheppard will try to get a good jump on his “Drive for 9” in his #9S Big Block at the event. However, Super Matt has yet to find success at Bridgeport. An issue took him out of the race in 2020 and he finished eighth last year. He also struggled in the early stages of DIRTcar Nationals this year but made big gains during the week and has picked up a couple Big Block wins since then.

Joining him as a prime contender for the win will be Rookie of the Year contender, 17-year-old Alex Yankowski. The young Pennsylvanian stunned the motorsports world in November when he won his first Super DIRTcar Series race in his second start during the World Finals at The Dirt Track at Charlotte. He enters the event, having competed weekly at Bridgeport and won the track’s prestigious Danny Serrano 100 in 2020. Also, his first Series start came at the track with a sixth-place finish.

Of the local drivers in attendance, Hillsborough, NJ’s Rich Scagliotta enters with the momentum of a career run at DIRTcar Nationals. He earned two top-five finishes and finished sixth overall in points for the event out of more than 40 competitors.

The team with the most momentum heading to The Kingdom of Speed is Heinke-Baldwin Racing. Its drivers Jimmy Phelps and Max McLaughlin were the class of the field at DIRTcar Nationals this year. McLaughlin won in his third race back with HBR and Phelps left Florida with an arm full of gators. The veteran driver won the final night of the event – his first Series win in two years and first at Volusia Speedway Park – and claimed his first Big Gator Championship.

Joining them with Series wins this year from Volusia are 2019 Series champion Mat Williamson, Peter Britten and Stewart Friesen. Williamson and Britten will be poised for a strong start at Bridgeport to have a shot at the championship this year ­– after Williamson finished second and Britten fourth in points last year.  And Friesen, who isn’t running for points, will have no other goal than to win.

The five-time Big Block NAPA Super DIRT Week champion and NASCAR Truck Series star won the Series’ inaugural event at Bridgeport in 2020 and then finished second to 2005 Series champion Tim Fuller last year. They’ll both try to be the first repeat winner, but the all-star field of Super DIRTcar Series drivers and local competition will make for a true gladiator fight to be king.

With $60,000 on the line for the 2022 Series champion, Bridgeport Motorsports Park will be a key start to the season for the 19 full-time drivers vying for the title.

For tickets to the King of the Big Blocks at Bridgeport Motorsports Park, May 3, CLICK HERE.