At A Glance: Gassing-up for the Grove 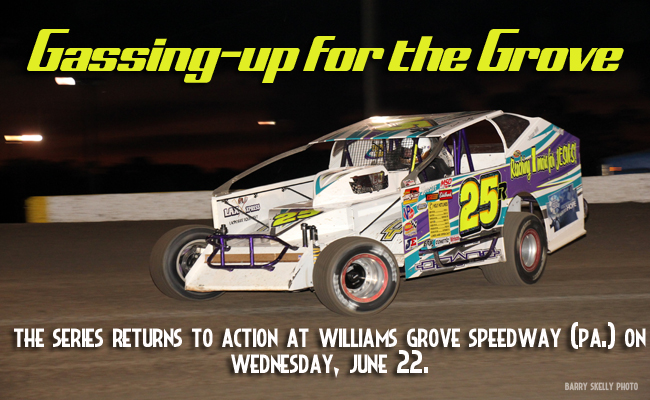 At A Glance: Gassing-up for the Grove

WEEDSPORT, N.Y. – May 16, 2016 – The Super DIRTcar Series travels to Williams Grove (Pa.) Speedway for the Big-Block Modified Mayhem at the Grove on Wednesday, June 22. The series 17 Platinum drivers will test their 800-horsepower Big-Block Modifieds on the Mechanicsburg, Pa. course for the first time since 2006.

The new combination of Billy Decker and car owner Mike Payne found their way to victory lane April 30 in the Super DIRTcar Series opener at Fulton (N.Y.) Speedway. The duo joined forces over the winter and battled through the 45-car field at the Highbank Holdup. Decker has now won at Fulton Speedway in back-to-back seasons.

The DIRTcar Sportsman Series also had an extensive entry list, drawing a field of 54 drivers to the 3/8-mile oval. Current points leader Brad Rouse rose to the occasion, winning the first night of the weekend-long event.

Since Wegner Motorsports introduced its W-16 Engine to the DIRTcar 358-Modified Series in December, drivers have finished in the Top 5. At Merrittville (Ont.) Speedway – where the engine was first tested in 2015 – Tim Jones and Chris Steele finished third and fifth respectively. In a Friday night showdown at Ransomville (N.Y.) Speedway, Erick Rudolph finished runner-up in the feature.

The motor is approved for the DIRTcar 358-Modified Series and its sanctioned tracks. The goal is that the $10,000 engine – power-plants are usually double the expense – will increase accessibility into the series and grow 358 car counts throughout the Northeast.

“We wanted an alternative for the Sportsman guys moving up and an option for teams looking for a more affordable way to enter the sport,” said Mike Perrotte, DIRTcar director, series and sanctioning. “It will keep more people racing.”

Sportsman driver Jeremy Pitcher is penalized for chemically altering the benchmarks provided by Hoosier Tire Company. Pitcher, who failed inspection during the Highbank Holdup weekend, will not only forfeit the points he was awarded at the event, but also will be fined and suspended from all DIRTcar sanctioned activity until June 10.

ABOUT THE TRACK
WILLIAMS GROVE SPEEDWAY is a 1/2-mile, smooth banked clay oval. In 2006, Jimmy Phelps passed race leader Alan Johnson on lap 24 of the Central Penn 100, eventually winning the feature. Phelps credited the win to saving his tires early in the race to make a push for the lead.

COMING UP NEXT: The Super DIRTcar Series will head to Southern Pennsylvania for action-packed racing in the Keystone State, as the series invades Williams Grove Speedway for a mid-week showdown on Wednesday, June 22.

2016 STAT ATTACK
There has been 1 Super DIRTcar Series feature this season.