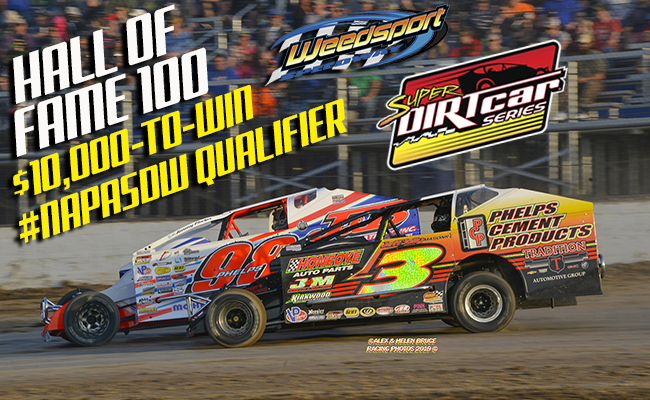 GET FAMOUS at Weedsport Speedway!

WEEDSPORT, NY – July 22, 2019 – In just one week the Super DIRTcar Series returns to the hallowed Big Block Modified grounds of the historic Weedsport Speedway. This year, the Hall of Fame 100 pays $10,000-to-win and grants a guaranteed starting position in the Billy Whittaker Cars 200. The best Big Block Modified drivers in the world will battle it out for 100 laps on the .375 of a mile Central New York oval.

Legends of the sport have circled the Central New York speedway including Series star Danny Johnson who is being inducted into the Northeast Dirt Modified Hall of Fame. The annual Hall of Fame ceremonies will take place Thursday night at the Dirt Motorsports Hall of Fame, which is located on the same grounds as the Speedway.

The Doctor has the most Series wins at Weedsport (11) and is currently running in the top ten in Series points. A strong run at one of his best tracks could move him into the top five.

It’s anyone’s guess as to who will join the rest of the Billy Whittaker Cars 200 guaranteed starters Larry Wight, Matt Sheppard, and Stewart Friesen.

At the top of the Series points is none other than the defending and eight-time Series Champion Super Matt Sheppard. Sheppard had a mega streak. In the last four Series races, Sheppard has not finished lower than second place. Can he keep it up and bring home the $10,000 grand prize?

Erick Rudolph took the checkered flag in the previous Series race and is starting to make a run at Matt Sheppard’s point lead. The Ransomville, NY hot shoe has also been finding a lot of success in the DIRTcar 358 Modified Series and just like Mat Williamson, the momentum seems to follow the team to the Big Block program.

Gypsum Racing has been a formidable force on the Super DIRTcar Series for many years. This year a double dose of the crimson red team is gunning for the Championship. Lightning Larry Wight sits in second place in points and already has one $10,000-to-win Feature under his belt. Fan-favorite Billy Decker is fifth in points. Decker has been consistent and fast with five top tens six Series starts. Can the Franklin Flyer breakthrough at Weedsport?

Mat Williamson has dominated the DIRTcar 358 Modified Series so far in 2019. The St. Catherines, Ontario front-runner wants to take that full head of steam into Hall of Fame weekend at Weedsport.

The rest of the Series top twelve are locked in tight battles. The Rookie of the Year battle is notable as rookie drivers make up the tenth, twelfth, and thirteenth positions in points. The Ringoes Rocket Ryan Godown in the No. 26 machine leads young guns Demeotrios Drellos and Jack Lehner.

Jimmy Phelps, Peter Britten, Danny Johnson, and Mike Mahaney have put together solid races so far and are dicing it up in the top ten in standings.

The current Super DIRTcar Series track record at Weedsport is held by Brett The Jet Hearn with a 15.241-second lap.

If you can’t make it out to the race track, check out our official live streaming partner FloRacing! They’ll have all the action live on Sunday, July 28 starting with Hot Laps.