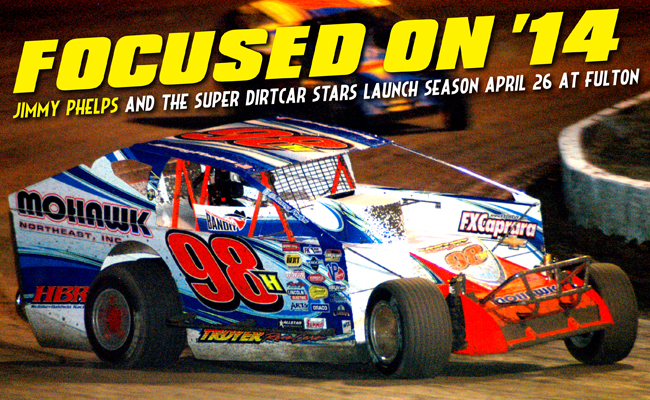 WEEDSPORT, N.Y. – Spring has sprung, and with it the Super DIRTcar Series is ready to kick into high gear. The Big-Block Modified tour kicks off Saturday, April 26, at Central New York’s Fulton Speedway.

Last year, the series brought the best competitors to the best facilities in DIRTcar’s Northeast Region as drivers duked it out for points supremacy. Veteran Brett Hearn, of Sussex, N.J., took home the crown after a season of surprises, upsets, record-breaking car counts and intense racing action.

“I’m just excited overall about the whole picture,” said Big-Block Modified driver and series regular Jimmy Phelps, of Baldwinsville, N.Y. “We’re getting some tracks back in, we’re getting some new tracks. We’re getting to see the series get some real momentum and it’s just real exciting to be a part of.”

In addition to competing for some of the top spots in the series the last few years, finishing third in series points for 2012 and ’13, Phelps will be traveling the tour with three-time series champion Matt Sheppard, of Waterloo, N.Y. Sheppard joined the Heinke-Baldwin Racing team early in 2014, and Phelps believes the former champion will bring valuable new perspective to the team.

“He’s brought some insight to the table and a different outlook to possibly help our equipment, our decisions on setup and so on and so forth” said Phelps, whose No. 98h shared the lead with Sheppard’s No. 9H during much of the last Super DIRTcar Series race February at Volusia Speedway Park. “It’s a win-win. Hopefully we can help him improve, or at least stay on pace with where he’s been; and hopefully he can help me improve.”

Sheppard, Phelps and Hearn will have to stay on their toes this year to stay ahead of a competitive field of series racers. October’s Syracuse 200 winner Billy Dunn, of Watertown, N.Y., will be in the running again this year, as will Pete Britten of Brisbane, Queensland, Australia, Gary Tomkins, of Rochester, N.Y., Justin Haers, of Phelps, N.Y., among many others. With more events in the Central New York region, some of that area’s strong contenders, including Billy Decker, Pat Ward, Larry Wight and Ryan Phelps are poised to make a splash in this year’s point standings.

Perhaps the most talked-about race on this year’s Super DIRTcar Series schedule is the series point opener Saturday, April 26, at Fulton Speedway. The Highbank Holdup 100 marks the first time since 2010 that the premier Big-Block Modified tour roared onto the 3/8-mile high-banked oval at Fulton, and fans and racers couldn’t be more excited.

“The track is probably one of my favorite tracks. The way it’s shaped and with how wide it is you can run about four-wide at any part of the track,” said Phelps, who is looking forward to returning to a track he hasn’t raced regularly since 2011. “Anytime you can spice things up with something new and throw a huge event to kick things off, I think people are really excited about it.”

“Huge event” might be an understatement for the Highbank Holdup, which is serving as both the Super DIRTcar Series northeast opener and the Fulton Speedway season opener. In addition to the 100-lap Big-Block Modified race, the track will be featuring the $1,000-to-win Industrial Tire Sportsman Championship Qualifier as well as Pro Race Cars Mod Lites.

About the Series: The Super DIRTcar Series is a traveling tour featuring the mighty, 800-plus horsepower Big-Block Modifieds. The series travels to the biggest venues and events in the Northeast region, culminating in the Syracuse 200 during NAPA Auto Parts Super DIRT Week. The Super DIRTcar Series also makes appearances at large events outside the region, including the World of Outlaws World Finals at the Dirt Track at Charlotte and February’s DIRTcar Nationals presented by Summit Racing Equipment at Volusia Speedway Park.

About the Track: Built into a hilly area on the banks of the Oswego River, Fulton Speedway’s 3/8-mile, high-banked clay oval is a mainstay for Central New York’s competitors and race fans.