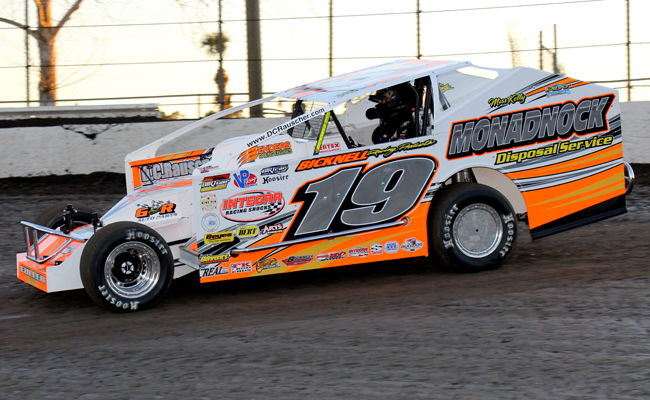 Fuller has 22 Super DIRTcar Series wins to his credit, but he has spent the last eight years competing for a World of Outlaws Late Model team that disbanded at the end of the 2014 season. In 1995, he was named Super DIRTcar Big Block Modified Rookie of the Year.

Fuller is maintaining two cars for Rauscher Racing at his race shop, including the Monadnock Disposal Service No. 19 that he drove at the Super DIRTcar Series opener at Fulton Speedway. Fuller nearly won the Pole Position Raceway Fast Time Award in qualifying, drew the 12th starting position in the Dig Safely NY redraw and finished 5th – despite some late-race equipment issues.

“The right front spindle was cracked and starting to break apart,” Fuller said. “I knew something was wrong and the car began to get very tight. I was lucky to hang on.”

“We’ll have some growing pains, but as a racer you think you’ll be able to come back in and be competitive,” Fuller said. You don’t really know until it happens, but I think we’ll be fine.”

The second event of the 24-race Super DIRTcar Series – the Jan Corcoran Memorial 64 – is set for Wednesday, May 20 at Canandaigua Motorsports Park. Fuller finished third in a 35-lap feature opening night at Canandaigua, trailing only race winner Gary Tomkins and Matt Sheppard and added another top-10 finish the next time out.

“We’re starting out with a two-year agreement,” said owner Dave Rauscher. “We know you don’t automatically compete with the top guys right away, but we’re off to a good start.

Rauscher is a regular competitor at Canadaigua in the No. 48too, but his natural gas pipeline business doesn’t allow much time for race car maintenance, which is where Fuller comes in. Monadnock Disposal in NH and Marro’s Trucking both help out with some sponsor dollars,” Rauscher said. “My car is basically Tim’s back-up if need be. I got the racing bug bad 10-12 years ago, what can I say?”