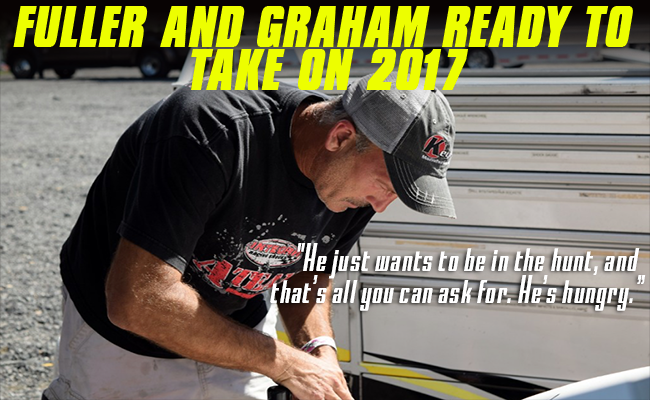 Big-Block Modified veteran Fuller will be taking on a new roll come 2017 as he mentors Graham’s son, Kody. Kody, a 25-year-old based out of Liverpool, N.Y., has very little experience with dirt racing.

“I went in early May to watch one of the races at Fulton Speedway, and that was my first dirt race I had ever even seen, so I had no idea what to expect. I’ve seen a total of one dirt race, and that’s it,” Kody said.

Kody started racing Supermodifieds for his father at the Oswego Speedway when he was 19 years old. “I used to race motocross. I told my dad that racing cars was easy. He told me to get in and try it, and it just took off from there.”

Kody’s only experience behind the wheel of a race car has been in a Supermodified. Supers are somewhat scarce in the Northeast, limiting Kody to a mere 10 to 12 races a year.

The idea of racing dirt started to float around in the Graham household early in the 2016 season. “We decided that with dirt you could pretty much race anytime, anywhere you want,” said Kody. “I decided it was something I wanted to try.”

“My dad asked me at the beginning of the year if I was interested in testing a dirt car, and I said yes.” With Kody’s tight work schedule at the Upstate Medical University and Fuller’s non-stop racing schedule, it was a struggle for the two to find the time.

Fuller and Kody were finally able to get together and have a practice session over the summer at Rolling Wheels Raceway.

“For the first time in a dirt car, he wasn’t horrible,” Fuller said. “He wasn’t used to the back end kicking out, so he always drove it with a push, trying to drive the car like a pavement car. He just needs more testing and more time.”

Fuller has been a team mentor before and knows the ups and the downs of someone young coming into the series, but he is confident in Kody’s abilities.

“He drives the car smooth like an asphalt car, and that’s good for those tracks that are black and slippery to keep the car straight. I told him there’s going to be times you have to cowboy it up,” Fuller said. “There’s a lot of different tracks and different conditions.  He has a huge learning deal ahead of him. There’s no time limit on it. He’s a young kid.”

Looking back at his first year on the series, Fuller was 26 years old.

“I got my ass handed to me,” laughed Fuller. “When I started I was with the greatest guys that ever raced dirt, they were in their prime. The first time I ran with the series I went to all of these race tracks I had never been to. It was very difficult. You had all of the greatest guys in dirt in their prime and then I’m coming into it with a low buck team and trying to compete at that level. I took a beating. I saw it through though.”

Fuller strongly believes that a good racer is the guy that can bounce back after getting his butt handed to him.

“There weren’t a lot of ups when I first started… a lot of downs. It’s obviously a team effort. You need money and good help. Money can only get you so far, though. Every track is different. You’re going to go from the littlest tracks to the biggest tracks on the series. They’re totally different animals. I think Kody will do fine if he can keep his chin up,” stated Fuller.

Kody feels that in order to better yourself as a driver you have to race against the best.

“The [Super DIRTcar] Series has the best of the best,” Kody explained. “It’s definitely going to gauge where I’m at right away. If you want to get better you have to race against those guys. There’s no point going to one weekly track and just racing against the same people. If you do well, beating up on the same people, you won’t get any better. You want to go against bigger and the best there is, and that’s where they’re at.”

Fuller explained he will maintain his own car separately at the start of the season. “Kody has his own crew. I’m basically showing him the ropes of racing on dirt. I will eventually help them and show them how to set up the car, but I don’t have that kind of time when you’re racing yourself to work on other people’s cars. My car will be here with me. His cars will be in Fulton. Eventually, the plan is to build a shop and have everything together in Fulton.”

Fuller and Kody are feeling confident with their new team combination going into the 2017 season.

“We have an owner that is focused on winning. It sounds like he will do whatever it takes,” Fuller said. “Ray raced himself, so he understands racing. He knows you aren’t going to win every race. He just wants to be in the hunt, and that’s all you can ask for. He’s hungry.”