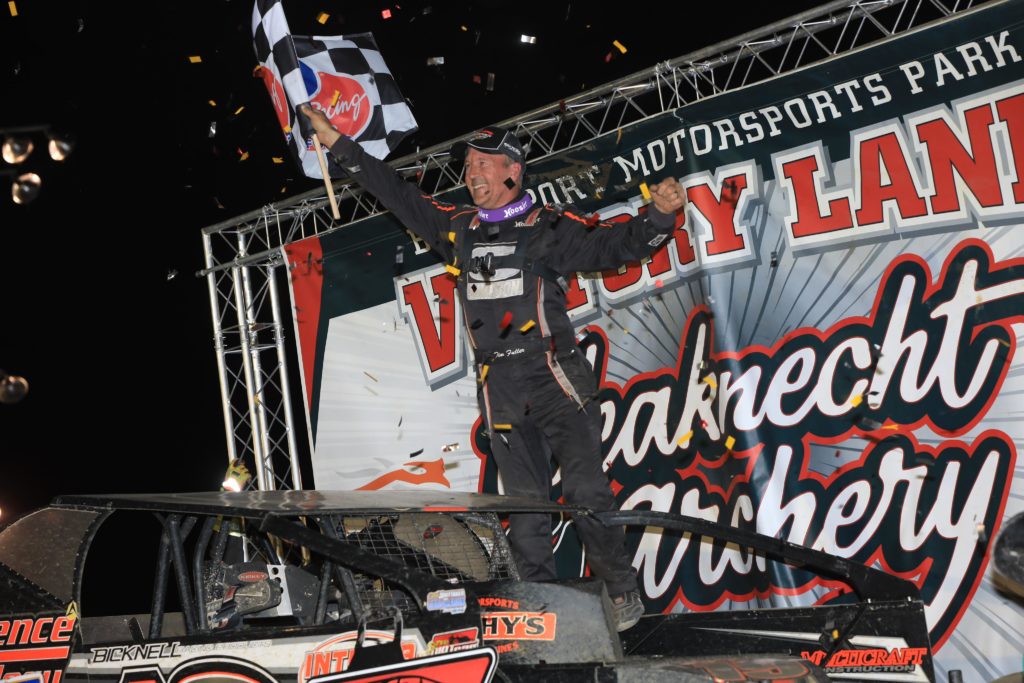 SWEDESBORO, NJ – With his first win since 2018, Tim Fuller, hero of the North Country, took over the race lead at the halfway point and never looked back. If he had looked back, Fuller would have seen the looming shadow of Stewart Friesen getting larger but after relegating Max McLaughlin to third, the #44 Halmar Racing Big Block failed to reel in the leader by the conclusion of the 100-lap, $10,000-to-win King of the Big Blocks.

Tim Fuller, from Watertown, NY, has now eclipsed the late Jack Johnson’s all-time Super DIRTcar Series win total with Series victory number 32 to his name. He did it after starting in the first position outside of the redraw, thirteenth, and dressing by the best Big Block Modified drivers around including fellow podium finishers Stewart Friesen and Max McLaughlin.

Early in the race, Fuller had to make some gutsy moves but he was so fast that he avoided taking big risks along the way. By the halfway point the #19 St. Lawrence Radiology Big Block was in the lead. Then he hit lapped traffic and that’s where experience became vital.

“I’ve been doing it so long that I’ve learned to be patient with lapped traffic and not rush it,” said Fuller. “I’ve seen people crash themselves out and lose the race because you are overdriving it’s stupid. I’ve lost them that way and I’ve won them that way. It’s your race to lose when you are leading. Protect the bottom and don’t get slid.”

By holding on for the victory, Fuller attained some redemption after allowing Friesen to pass him late in the Thousand Islands 100 at Can-Am Speedway in April this year. The Halmar driver went into Bridgeport with a historic three-race win streak to start the championship season.

“Friesen is the best in the business right now,” Fuller conceded. “There’s no question about it. He’s in the prime of his career. I remember being his age. He can still see very well! He has so much ability and he’s not going away for a while so anytime you can win one over him means you’re doing something right.”

The racing on the track was intense with three and four-wide moments everywhere. The Hoosier Racing Tire compound game was just as hotly contested as the side-by-side action on the speedway. It played a crucial role in the outcome of the race.

“I knew I had soft rubber on the left side and right front,” Fuller noted of his tire choices. “My right rear was as hard as you can get. I think the other guys were running the softer tire. I made a shock change on the right front before the Heat Race and I liked that. We just got better and better. The long-distance races here I’ll take them all day long.”

After redrawing the eleventh starting position, Friesen took his #44 up 10 spots to pick up the second-place finish.

“We were good,” said Niagara-on-the-Lake, ON driver Stewart Friesen. “We went as hard as we could get with the tire. I think some of those early cautions hurt us a bit when the tires got hot and cooled back off. We’ve got some momentum going and fast race cars. Big thanks to Halmar and Chris Larsen.”

He won last year’s King of the Big Blocks and many had him touted as the favorite to win the 2021 edition. Ten more laps or one more restart may have put the ball in his court but the race stayed green and Fuller put too many lapped cars between himself and the #44 for Friesen to challenge him.

“We have a good notebook from last year,” Friesen noted. “We went as hard as we could go last year too and the track was more abrasive then. Tonight, for whatever reason it stayed a little bit slicker. We were good at the end but we just didn’t fire at the beginning. If you look at those cautions it’s a woulda/coulda/shoulda scenario. We’ll chalk it up and roll on to the next one.”

Friesen steadily moved through the field to the front.

“It’s an awesome race track,” he said. “Super racy. If you enter on the bottom you can get in there good but then you lose all your momentum to the guys sailing on the outside. It was a little bit sketchy on the restarts going three and four wide. It was fun.”

Third-place finisher Max McLaughlin led the second-most laps of the race. The #32C started fifth but was soon mixing it up with the top 3 including pole-sitter and former HBR teammate Jimmy Phelps who had a strong night and ultimately finished fifth.

“These races are too long to count on anything early,” McLaughlin said of his early domination. “I knew when we fired well on the restart and drove right to the lead that I may have made the wrong.”

Again, the tire game in the pits made for an exciting Feature on the track.

“I ran a 400 right year and 300s in the other three,” McLaughlin said. “They were running 400s and 500s so they [Fuller and Friesen] were better on the long runs. Even though we picked the wrong tire we still ran really well. I think we can build on that.”

The Mooresville, NC native has one career Series win, the finale of DIRTcar OktoberFAST at Weedsport last October, but he’s been close to doubling up that total.

“My stuff was pretty burned out at the end,” McLaughlin lamented. “I was playing defense more than I was attacking. It was a lot of fun. It’s always good racing with these guys. I love racing with the Series and we’ll get another win here soon.”

Fourth-place finisher “Batman” Peter Britten was the hard charger award winner for advancing more positions than any other driver. He drove up 16 cars for his top 5 from twentieth.

Demetrios Drellos, driver of the #111 from Queensbury, NY was the only driver to run a 16.0 and that was good enough for the $100 Billy Whittaker Cars Fast-Time Award winner.

Young gun Alex Yankowski finished sixth against a field of elite Big Block drivers. He a $50 bonus from Ken Bruce for being the highest finishing Pennsylvania/Delaware/New Jersey driver plus a free Hoosier Racing Tire for drawing position number 12 in the redraw.

NEXT UP: The Super DIRTcar Series goes to Weedsport Speedway and Lebanon Valley Speedway for a doubleheader May 30-31. Bookmark SuperDIRTcarSeries.com to stay informed on all the Big Block action. Plus, race fans can follow along on Twitter, Facebook, and Instagram.