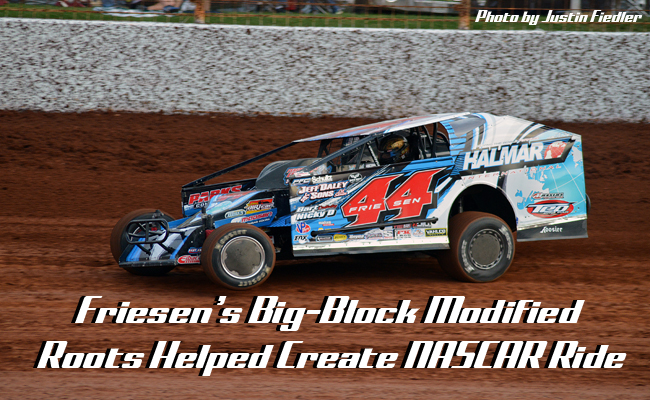 CONCORD, N.C. — Jan. 11, 2017 —One of the biggest stars of the Super DIRTcar Series will race full-time in the NASCAR Camping World Truck Series come 2017. Sprakers, NY driver Stewart Friesen has partnered with Chris Larsen to create Halmar Friesen Racing for his first full-time foray into NASCAR Racing, he announced Monday. Tommy Baldwin Jr. will be the team’s crew chief.

“We got our feet wet in it last year and the opportunity came to team up with Tommy Baldwin and his operation so it was a no-brainer for us. We combined forces and I’m really looking forward to it,” Friesen said.

Friesen made his NASCAR Truck Series debut last July at Eldora Speedway, NASCAR’s only race on dirt. The ride was supposed to be a one-time deal, but quickly blossomed into five more races for Friesen before the end of 2016. It led to the formation of his new team, which will be based in Mooresville, NC.

“We had just planned to do Eldora and have some fun with it, but it kind of lit a fire under everyone and the decision was made to try and do more,” Friesen explained. “We really learned a lot and met some great people along the way. Now we’ve kind of upped our game to the next level.”

Friesen’s opportunities in the NASCAR Truck Series have come largely from his ability to develop a complete driver’s skillset while racing 800-horsepower Big-Block Modifieds in the Northeast.

He’s honed his skills with plenty of success in the process. Friesen has 23 career Super DIRTcar Series victories to his name and countless other weekly triumphs over the last decade. He also has one win with the World of Outlaws Craftsman® Sprint Car Series, which came at Ohsweken Speedway in July 2015.

“Big-Block Modifieds are hard to drive. There’s a lot of power, not a lot of grip and you’re sliding around. It’s really great racing. You really do develop a skillset to be well-rounded and adaptable into other cars,” Friesen said.

Friesen’s 2016 Super DIRTcar Series season was a successful one that included a second-place overall finish in series points and his fifth Super DIRT Week victory in the inaugural event held at Oswego Speedway last October. Friesen felt the offer to run the NASCAR Truck Series on a full-time basis was a natural progression and an offer he couldn’t refuse.

While NASCAR is gaining one of dirt track racing’s brightest stars, Big-Block Modified fans aren’t losing one of their own. Friesen made it clear he has no intentions of slowing down to one race per week with NASCAR.

“We’re still going to run a lot of Modified races. We’re building two new cars in our shop and with some Sprint Car stuff, we’ll be probably busier next year than we were this past year,” Friesen said, adding his home will still be in Sprakers, NY.

“Once we get more of our travel schedule ironed out by the end of January, we’ll be able to fill in the blanks on the Modified stuff. I’m hoping to do 40-50 races.”

Already penciled in are Big-Block Modified races at Volusia Speedway Park during the DIRTcar Nationals in February. The Big-Blocks compete at the fast, Florida half-mile February 22-25. Friesen will race at least two of those nights with the possibility of a third depending on his NASCAR schedule at Daytona.

“We’re bringing a new car down to Volusia so we’re really looking forward to that,” he added.

Friesen also confirmed that the NASCAR Truck Series schedule aligns perfectly to allow him to challenge for a sixth career Super DIRT Week victory when the event returns to Oswego on October 4-8, 2017.

Regardless of how far Friesen’s NASCAR venture takes him, it’s clear Big-Block Modified racing will be at the core of his love for racing.