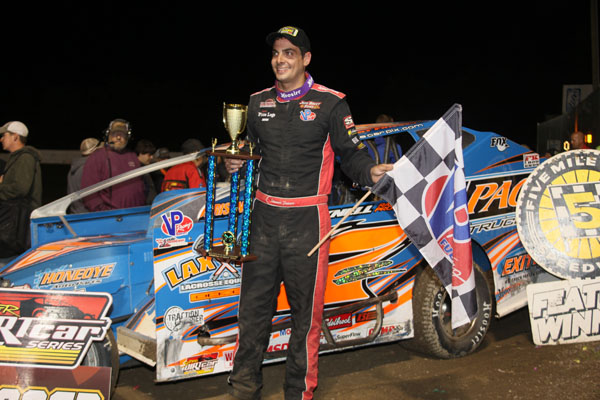 Driving his wife Jessica’s Corr-Pak Merchandising No. 1Z, Friesen became just the second Canadian ever to win a World of Outlaws feature – in his 4th start Tuesday night at Ohsweken Speeedway

Following the Bob St. Amand Sr. Memorial 100 at Merrittville Speedway Monday, August 3, the three-time Syracuse 200 winner will compete before family and friends at Ransomville, the track where he began his racing career in a go-kart.

Ransomville’s Alex Friesen Summer Nationals 100, which Friesen has won twice, pays $6,000-to-win and has a posted purse, with contingencies, in excess of $30,000.

“It’s always special to race there,” Friesen said. “Especially now after beating the best of the best in the 410 Sprint car. I was just so thrilled. It’s unreal.”

“I know Stewart is excited to race at Ransomville where he’ll have a lot of folks cheering for him,” Mike Payne said. “And the same goes for Weedsport. The purse is very good and our sponsor, Page Trucking, is right across the highway.”

In the only Big-Block Modified race on the newly-surfaced Weedsport 3/8-mile so far this season, a 35-lap lead-in to a World of Outlaws event, Friesen came out on top.

He edged current point leader Matt Sheppard at Weedsport and wired the field at Ransomville.

“I like Weedsport,” Decker said. “Hopefully, we can snag another one there.”

In addition to the $10,000-to-win Big-Block Modified feature, the night’s action will include crate sportsman and antique stock car events. Pole Position Raceway will be on hand to give away T-shirts and coupons, and there will be a driver autograph session shortly after the gates open.