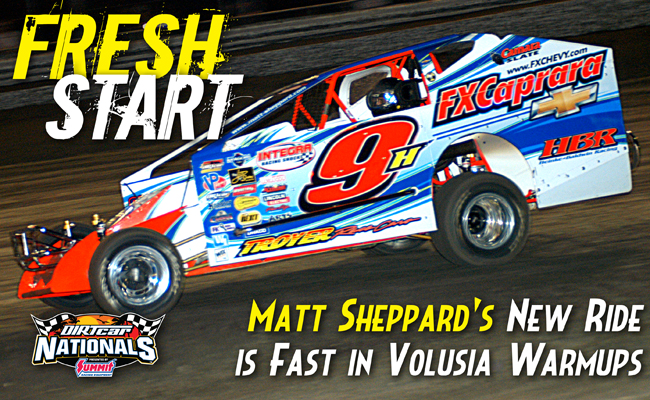 BARBERVILLE, FLA. – February 18, 2014 – A new year means new beginnings, at least for many of theSuper DIRTcar Series racers at DIRTcar Nationals presented by Summit Racing Equipment. The Big-Block Modified tour opened its 2014 season Tuesday, Feb. 18, with practice laps at Volusia Speedway Park, and it was some newcomers that wowed the crowds in the grandstands.

For the first of three hot laps sessions, Anthony Perrego of Montgomery, N.Y., sat behind the wheel of a Big-Block Modified for the first time. Just a couple laps later Perrego claimed fast time with a 17.005-second lap.

“I was pretty nervous going out for that first one,” Perrego recollected. “We were sitting out on the infield and I had Brett around me, and I had those guys around me. You get a little jittery when you see those guys.”

“The first time in a Big-Block, I was pretty impressed to be able to get a fast time in one and two,” said Perrego, who started in the Sportsman class and moved up to a small block mid-year 2013.

Defending Super DIRTcar Series Champion Hearn was strong all night, placing second in each practice session. Sheppard made fast time in the third round, showing off his new ride with Henke-Baldwin Racing (HBR).

“Everything’s been good; the team’s been good, the car has felt good,” Sheppard said of the change. “I’m just excited to get into a real race and see how we stack up.”

Sheppard racked up three consecutive Super DIRTcar Series championships before joining HBR and has been quick to acclimate to the FX Caprara Car Companies sponsored No. 9h. He finished 18th in time the first round and 15th the second, but made the right changes to claim fast time the final time around with a 18.018-second lap.

“The car wasn’t so good in the second session, but we made a few adjustments and I think we’ll be right there this week,” said Sheppard, anticipating a strong showing for the 9h both at DIRTcar Nationals presented by Summit Racing Equipment and the remainder of the Super DIRTcar Series.

The Super DIRTcar Big-Block Modified Series returns to Volusia Speedway Park Wednesday, Feb. 19, for the first of four doubleheaders rounding out DIRTcar Nationals presented by Summit Racing Equipment. Tickets will be available for purchase at the gate and include a FREE Fan Pit Pass!