By expanding to an epic four-day championship finale event, Nov. 2-5, the World of Outlaws World Finals at The Dirt Track at Charlotte is bringing drivers and fans more action on and off the track.

The event commences Tuesday, Nov. 2, with the Hauler Load-In Parade and PRN Kick-off Party, featuring driver interviews, race cars and live music. Then, Wednesday, Nov. 3, will mark the first day of on-track action for the World of Outlaws Sprint Cars and World of Outlaws Late Models.

And while the Super DIRTcar Series may not have on track action, its drivers will line the front stretch for a two-hour Fan Fest (2 to 4pm ET) before racing action, allowing fans to get up close to their favorite drivers and cars. World of Outlaws fans will have the same opportunity the next two days with a Fan Fest (from 2 to 4pm ET each night) for the Sprint Car drivers on Thursday and one for the Late Model drivers on Friday.

Then, three champions will be crowned on Saturday, Nov. 5, with a massive night of action. Points accumulated from the previous nights will determine the Heat Race lineups for each Series. After competing for $15,000-to-win races during the weekday races, both World of Outlaws series will battle for $25,000-to-win in Saturday’s Feature. The Super DIRTcar Series will compete for $10,000 paydays during the week and $15,000 in the finale.

Before the Features, the famed 4X3 Wide Salute, placing the fields for the World of Outlaws and Super DIRTcar Series on track at the same time, will grace the speedway for the most iconic photo opportunity in motorsports.

The storylines leading up to the event are building for an added level of excitement throughout the week as well. Three-time and defending Word of Outlaws Sprint Car Series champion Brad Sweet is on track to try and claim his fourth straight title, but drivers like David Gravel and Carson Macedo are still close behind, looking for their first championship.

In the Late Model Series, veteran driver Dennis Erb Jr. has a strong championship lead en route to his first title, but the two rookie contenders behind him, Tanner English and Max Blair, are dueling it out for the Rookie of the Year title.

To not miss any of the excitement, get your World of Outlaws World Finals tickets by CLICKING HERE. If you purchase the four-day ticket package before Aug. 31, you’ll receive a free fan pit pass.

If you can’t make it to the track, you can watch the week of racing live on DIRTVision – either online or by downloading the DIRTVision App. 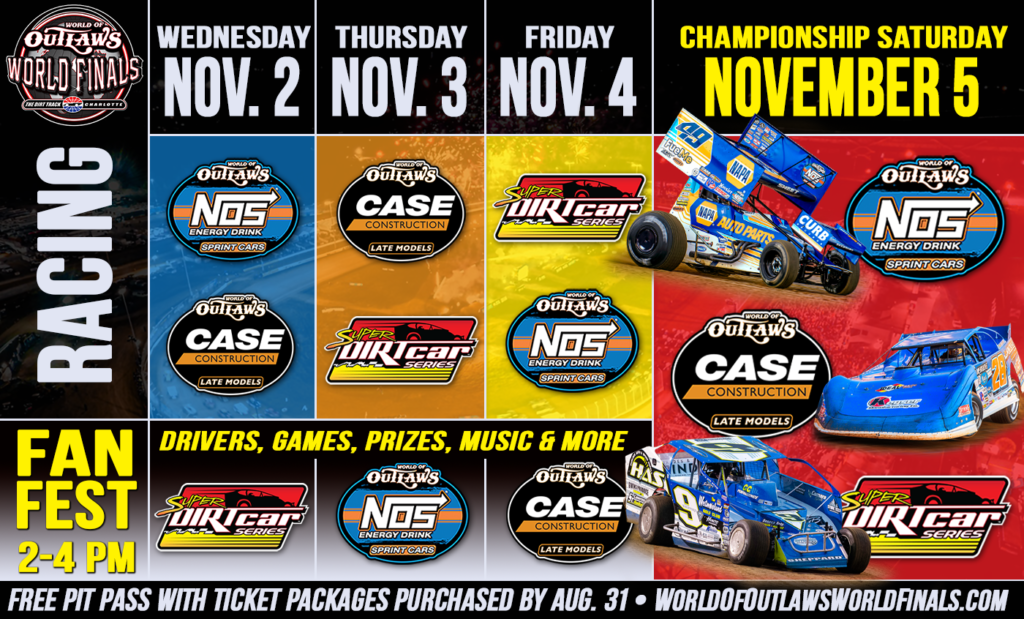