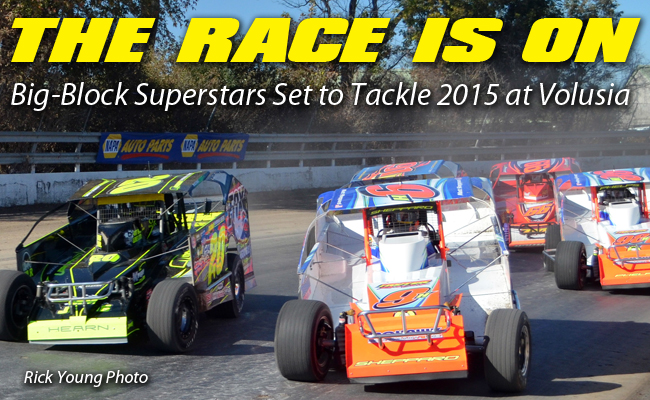 Brett Hearn, an eight-time series champion sporting a new Teo Pro Car experimental design, is an 18-time winner at the high-speed half-mile dirt oval in Central Florida. He’ll be looking to add to that total after going winless at the track in 2014. Hearn’s last victory at the “World’s Fastest Half-Mile” came on Feb. 23, 2013. Hearn’s career win total currently sits at 855.

Three-time Super DIRTcar Series champion Matt Sheppard returns to the Sunshine State beginning his second season with Heinke-Baldwin Racing. Sheppard stunned everyone with the decision to switch teams before last season, but the Waterloo, N.Y., driver made it pay off with a victory in the 2014 finale at the DIRTcar Nationals. Sheppard came up just shy of winning the Super DIRTcar Series championship last year, now he’s looking for another fast start in his Troyer Car to propel himself toward a fourth series crown. Sheppard is joined by his teammate at HBR, Jimmy Phelps, who is searching for his first victory at Volusia.

Danny Johnson is looking to keep his hot streak going. The native of Rochester, N.Y., enters the DIRTcar Nationals after winning the final race of the 2014 season at the Bad Boy Buggies World Finals in Charlotte with his Chris Gennarelli owned No. 27J. He also has a Big-Block Modified win already this year. He’ll attempt to keep that streak alive on Wednesday night when the Super DIRTcar Series kicks off with a 30-lap main event.

Stewart Friesen, the 2014 NAPA Super DIRT Week winner, comes into Volusia as one of the favorites. Friesen captured round two for the Modifieds in 2014 at Volusia and was strong enough all week to earn the “Big Gator” as the DIRTcar Nationals Big-Block champion. He’s again piloting the Tom and Roxanne Cullen-owned Teo that propelled him to a championship at Utica-Rome Speedway in 2014.

The Garden State of New Jersey will be well represented by veteran Modified drivers Billy Pauch and Jimmy Horton. Pauch, who has won at Volusia in both a Modified and a Sprint Car, will look to earn his first win at the track since 2008. He holds six career wins at the speedway. Horton, coming off a Bridgeport Speedway title, is a six-time winner, as well, with his last feature victory coming in a 50-lap feature in 2008. These two are joined by young hot shoe Neal Williams, who is aiming to score his first Volusia Speedway Park win.

Larry Wight is the sole representative of the LJL Racing team at Volusia. Wight is scheduled to make only his second start ever behind the wheel of a new Teo Pro Car. He has tried several manufacturers over the past few seasons, and will be joined by fellow Teo young guns Tyler Dippel and Anthony Perrego.

Tim Fuller is making his return to Big-Block Modified world after dabbling in dirt Late Model competition over the past several seasons. Fuller has teamed up with Central New York driver Dave Rauscher. Fuller, of Watertown, N.Y., will debut a No. 19 Bicknell on Wednesday night at Volusia. It will be the same ride he plans on running weekly at Canandaigua Motorsports Park. Joining Fuller in the pits is fellow Canandaigua regular Justin Haers, who won his first series race last year at DIRTcar Nationals.

Erick Rudolph and Mike Payne joined forces during the 2014 season and look to come out strong in 2015. Rudolph earned his first Super DIRTcar Series win at the end of last season in Quebec with his most recent victory coming in TQ Midget action in Atlantic City’s Boardwalk Hall. The Ransomville, N.Y., driver has never won at Volusia Speedway Park.

As always the Quebec, Canada, contingent is as strong as Mario Clair and Yan Bussiere. They are joined by first time Big-Block Modified driver J.F. Corriveau. Corriveau is a restaurateur from Montreal. Other Canadians in the field are expected to include the 2013 Lernerville Speedway track champion Mat Williamson from St. Catherines, Ontario, and Picton, Ontario, driver Tim Kerr.

Gates open at 5 p.m. and racing begins at 7:30 p.m. DIRTcar Late Models will also be on the card Wednesday night with the final three nights of action featuring the Big-Block Modifieds and World of Outlaws Late Models.