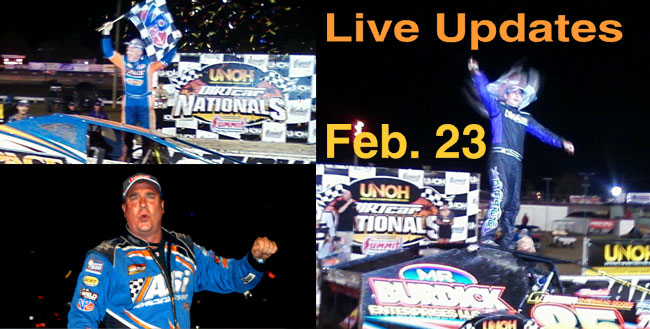 BARBERVILLE, FLA. – February 23, 2013 – The Big Block Modifieds of the Super DIRTcar Series are gearing up for their fourth and final race night during UNOH DIRTcar Nationals presented by Summit Racing Equipment at Volusia Speedway Park. View live updates below, or see results as they become available by clicking HERE.

“I have one little gator, but it’s getting lonely” – Danny Johnson draws the pole

Wednesday’s winner Danny Johnson drew number 1 for tonight’s race. The racer who draws the one starts the feature in the front row and can choose to start on the inside pole or outside pole. Odd-numbered competitors will line up behind the 1 and even-numbered behind number 2. The full lineup for tonight’s race is below.

For Super DIRTcar Series racers and fans, UNOH DIRTcar Nationals presented by Summit Racing Equipment is as much a vacation as a speed week…a February RACEcation. Travelers from New York, Pennsylvania, Ontario, Quebec, and other parts of the frigid north are happy to take a break from their snow-covered homes and spend some time in sunny Florida.

And thus the hashtag, #FLinFeb. Tweeple watching Volusia racing at the track or at home can see the latest updates and join the conversation. Just search for #FLinFeb from your Twitter account to see what everyone is saying about UNOH DIRTcar Nationals presented by Summit Racing Equipment, and be sure to tag your comments with #FLinFeb so they show up in the feed too.

Can Laubach make it a twofer?

After clocking the second fastest hot lap time overall, Laubach looks like he’s ready to repeat last night’s success with a heat race win. He was able to keep Neal Williams and Brett Hearn behind him. Both Laubach and Williams will go to the redraw, where they contend against Billy VanInwegen, Justin Haers, Stewart Friesen, H.J. Buniting III, Mat Williamson, and Danny Johnson.

The young Canadian racer Mat Williamson and his team seem to have found the right formula for Volusia Speedway Park. Last night, Williamson took the 6 to 11th place after starting 21st, and tonight he won his heat race. The modified driver from St. Catharines, Ontario, is certainly a strong contender in tonight’s race.

Pete Britten, who placed third the past two race nights and fourth the opening night, is starting his season strong. The Australian modified driver typically competes strongly in qualifying events, often falling behind in the redraw and the feature. Last night his experience was the opposit; Britten expressed dissatisfaction with the 13th spot he qualified for, yet he was able to charge ahead to third. Will Britten be able to further improve his feature performance tonight after placing 5th in his heat race?

Justin Haers, of Phelps, N. Y., made the fastest lap during the timed hot laps session with a 17.393-second lap. Haers placed second in Friday’s Super DIRTcar Series race at UNOH DIRTcar Nationals presented by Summit Racing Equipment, and is already setting himself up for success in tonight’s race.