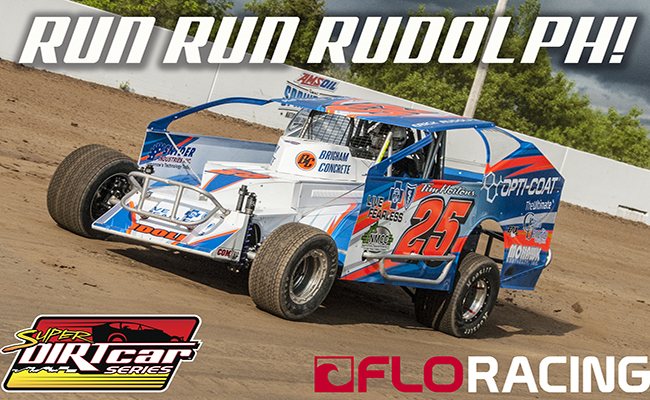 When the Super DIRTcar Series season finally gets underway on Memorial Day with the Heroes Remembered 100 at Weedsport Speedway in New York, Erick Rudolph will be in the field. And for every series race after that in 2018.

The 26-year-old native of Ransomville, NY, is making his second attempt to run full-time with the Super DIRTcar Series, which is starting a full month later than it was scheduled to after rain washed out races at Fulton and Bridgeport speedways. He last competed as a tour regular in 2014 at just 22 years old. The series’ offseason decision to eliminate DIRTcar home track points as part of the championship was a big reason Rudolph decided to tackle the entire tour this year, he said.

“I don’t think we’d be doing it if there was still home track points,” Rudolph admitted. “The grind to run every Saturday was tough for us because you had to be there every Saturday. If you fall behind now, you can take a Saturday night off to catch up if you need to.”

That’s not to say Rudolph will be competing exclusively with the Super DIRTcar Series. It’s quite the opposite, actually. Between his Big-Block and Small-Block/358 Modified action, he’ll be plenty busy, said Rudolph, who finished second in Ransomville Speedway’s 358 Modified standings last season.

“It’s a rough schedule, but it’ll be around 90 races or so,” Rudolph said. “I’ll be at Ransomville weekly, and then after that, it’s just going to be where the schedule fits and where we decide we want to be at.”

When Rudolph competed on the tour full-time in 2014, it was behind the wheel of the Mike Payne-owned No. 7z. This year, Rudolph will tackle the tour behind the wheel of his family-owned No. 25 Bicknell Chassis with Bob Bruneau Engine Research power plants under the hood and carry primary support from Opti-Coat, Blue Cross Blue Shield, and Mohawk Northeast.

Rudolph is eager to test the team he has assembled for the tour. Led by his father and crew chief Charlie Rudolph as well as Chris Murphy and Rich Chauvin, the team works together like a well-oiled machine after wrenching as a group for the past few seasons.

“This team that I have here, the guys that work with me and my father, we’ve been working together for that much longer so I think as a team we’re more in tune as well,” said Rudolph, comparing his current outfit to the 2014 group.

The team has also put a lot of work into ensuring the No. 25 is prepared for the rigors of the series and running competitively at 90 events.