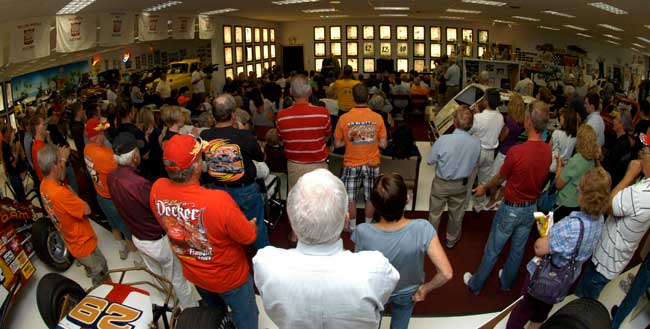 – Doiron, Bicknell & Johnson in as Drivers while Tobias, Colton, Kirkland, Alton and Carole Palmer honored for significant Contributions to the sport

WEEDSPORT, N.Y. – May 27, 2012 – Hundreds of fans, media, family and friends all melded together nicely in the the Dirt Motorsports Hall of Fame & Classic Car Museum to honor eight  greats who have made the sport of dirt track racing the spectacle it has become today. Among the splendor and artifacts of racing’s rich past and many powerful racing machines of era’s gone by, Ovide Doiron, Pete Bicknell & Jack Johnson were inducted as drivers along side Alton & Carole Palmer, Cheryl Kirkland, Billy Colton, & Dianne Tobias for their special contributions to the sport of dirt track racing. Also honored and acknowledged for their tireless efforts as ambassadors and stewards of racing, were standout motorsports announcer the voice of Northeast dirt modified racing, Shane Andrews & Hall of Fame curator, racing historian and pioneer, the incomparable Jack Speno.

Co-MC’s for the day’s induction ceremonies were Hall of Famer Joe Marrotta & Shane Andrews. Marrotta led off by calling upon his friend and pupil Shane Andrews to be acknowledged for the work he has done in racing as the race announcer at innumerable tracks and as the voice of the Super Dirtcar Series. Andrews, never one to be short on words, did not hesitate to humbly thank so many who came before him, and helped him along the way in his career, marked by his true passion for the sport, a colorful & relate able fan-centric perspective with a voice instantly recognized by fans of dirt modified racing throughout the Northeastern United States.

Marrotta kept this high energy event on track as he next called upon Cheryl Kirkland to receive the 2012 Gater News “Outstanding Women in Racing Award.” The soft spoken Kirkland brought the crowd into her families racing history as she talked about the way they came to run the Brockville Speedway, what the day in and day out of owning a race track for the past 17 years does for her and her great family and how special it was for her to receive the award from the Dirt Motorsports Hall of Fame.

Next up, a co-recipient of the Gater News “Outstanding Women in Racing Award” Dianne Tobias was introduced by wordsmith Buffy Swanson. Tobias, a straight shooting Pennsylvannian worked hard along side her family, fabricating, machining and building race cars in a time when woman weren’t even aloud into the pit area at most raceways. Tobias was an unwitting pioneer in that regard, more interested in working hard and supporting her family business and racing efforts. Racer, fabricator, wife, & mother Tobias carries that family name with a quiet dignity and respect befitting the Hall of Fame.

For the first of the driver inductions, Shane Andrews stepped to the podium to introduce Canadian engine builder, 25 time track champion with over 300 feature wins and a pioneer in racing, Ovide Doiron. Doiron’s involvement in racing dates back to the 50’s and has feature wins in Canada and the US. Doiron’s on track reputation and gentlemanly way opened up many doors for him as an engine builder, preparing powerplants for several drivers over the years, including Dave Heaslip, Mark Hitchcock, Pierre Dagenais (of which Bob & Tim McCreadie drove his cars), Pat O’Brien’s first years as a driver/owner, the late Sheldon Legue (Doug Carlyle), Tony Corcoran (Mr. DIRT Champion) and Eric & Denis Gauvreau to name a few. To this day, he continues to build motors and offers advice and support to many local drivers that he mentored into the sport.

Next of the Drivers to be inducted was “Mr. Smallblock”, Pete Bicknell. The St. Catherine’s Ontario driving ace, chassis builder and race track owner and promoter was quick to point out that though the Hall is a great honor and tradition, don’t be to quick to throw any retirement parties for him just yet. “I’ve still got a lot of racing left to do” the gregarious Bicknell grinned after the conclusion of the induction ceremonies. Bicknell has been involved in stock car racing at may levels since the 1973, and though, the driver and car builder admits, “at times it’s been hard on my family”, he plans to continue to grow and build his families involvement in racing in the years to come.  In addition to his election to the DIRT Motorsports Hall of Fame, he’s also a member of the Canadian Racing Hall of Fame and the St. Catharines Sports Hall of Fame.

Then, it was Jack Johnson’s turn to be inducted into the Dirt Motorsports Hall of Fame. In 2002, an unsatisfied Johnson had asked for a rain-check on the honor of being inducted as he felt as though he had unfinished business still at the track, and he was right, as Jack continued to win races and wow crowds with his smooth and superb driving style. With Jack attending to things back home, his son, Ronnie was there to receive the award on his behalf and Shane Andrews interviewed him about what this honor meant to his father, and the family, following a fantastic, storied racing career. A video was played of a pre-recorded interview that Andrews had sat down and done with Jack to play for his friends, family and fans on the day of his induction. A respectful silence fell over the enormous crowd on hand as people huddled together to watch the video message together at the Hall. Johnson’s credentials on track are all well documented. On Sunday, Jack Johnson, the man, driver and father, was inducted as a living legend into the Dirt Motorsport Hall of Fame.

Fittingly, Alton and Carole Palmer were the next honorees on Induction Sunday at the Hall of Fame. The recipients of the Northeast Modified Hall of Fame ‘Gene DeWitt Outstanding Car Owner’ Award , eemotionally and gratefully accepted. Great friends of the Johnson family, and many, many others in the racing community have supported a great list of racing competitors in addition to their own racing endeavors. For 36 years “Palmers Service Center” (Howes Cave, NY), has owned and sponsored some of dirt Modified racing’s finest drivers including DIRTcar Hall of Fame drivers Lou Lazzaro and Dave Lape, and 2012 Hall of Fame inductee Jack Johnson.  Others who carried the Palmer name to victory lane include John Constantino (Sportsman), Dave Lape (Modified), Vinnie Sangenetti (Sportsman), Josh Hohenforst (Sportsman), Jimmy Davis (Modified), John McAuliffe (Sportsman), Kenny Gates (Pro Stock), Kevin Buff (IMCA) and 2011 Fonda Speedway Modified Champion Ronnie Johnson.

“This award is beyond our wildest dreams—I didn’t think it would ever happen to us,” remarked Carole Palmer.  “We have sponsored excellent drivers over the years and just can’t believe this is happening to us!”

The Mechanic of the Year Award, was the next award to be bestowed in the day’s honors. Veteran chassis designer and crewman Bill Colton, not known as an extrovert, was remarkable and candid in thanking the many people he has worked with over the years. “I was always into fabrication with my own cars and built the aluminum roof for the first Mud Buss. Maynard saw what I did and liked it, hired me right away and together we moved fast forward after that,” recalled Colton, who officially joined the Troyer staff in the summer of 1981, worked his way up the chain of command and assumed control of the shop’s main affairs as a managing partner in ’89 before emerging as sole owner of the prolific company 10 years later. The production site was initially located on Dewey Avenue in the north end of Rochester, near Lake Ontario before the move to Lyell Road, in Gates, New York, just west of the Flower City. “I also did body work for the original Mud Busses and made the move to Rochester when the third or fourth car was being built. We’ve been going at it just as strong ever since.” Colton pledged to continue to produce high quality and keep innovating to bring his customers the success they have come to expect when dealing with Troyer Race Cars.

Following Colton, Joe Marrotta Coaxed a camera shy, Jack Speno to the podium to be acknowledged for his years of loyal and tireless service to the racing community, & also for his roll in the next phase of the hall of fame itself. Jack and Joe, friends and cohorts with a shared story going back four decades ended the ceremony with stories of flying stuntmen ending up in the “Raffidillies” and Will Cagle lending technical set up assistance to Jack as an aspiring Pace Car Driver. Speno, ever so humble, was quick to say thank you to so many people that he has worked with and befriended throughout his wonderful career in racing.

The Hall of Fame will be open to the public daily Tuesday through Sunday from Noon to 5 pm.

Next Hall of Fame Event:

Who’s was inducted and honored?

The home of dirt racing’s legends, The Dirt Motorsports Hall of Fame and Classic Car Museum

Want to join the countdown to induction Sunday, get in on the discussion about races and racers past, present and future? Tell your fans, viewers, reader or listeners about what’s happening at the Hall?

Need more information about the Hall? Want to get more involved? Booking information for your next event?

Visit us on the web: http://www.dirthalloffame-classiccarmuseum.com/

Photos of Events at the Dirt Motorsports Hall of Fame:

2010 Hall of Fame Inductions and race