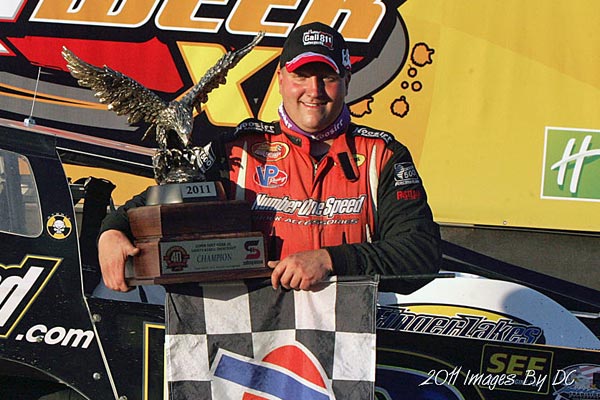 Dunn, 27, earned $2,500 for triumphing in the special event, which featured a 10-car field comprised of DIRTcar Modified champions and selected wildcard entries. The checkered flag came after he put his Bicknell car on the outside pole for Sunday’s SEF 200 Presented by Ferris and Snapper during time trials on Thursday and won a 20-lap heat race under the lights on Friday.

“I’m just trying to take it all in, take it one day at a time,” Dunn said of his head-turning performance at the famed Syracuse Mile. “I’m thrilled with how we’ve run so far this week, but Sunday is still the important day so I’m trying to keep everything in perspective and concentrate on tomorrow.”

Dunn was plenty focused in the Safety-Kleen Shootout II. He needed just five laps to hustle his Bicknell No. 49 forward from the fourth starting spot and grab the lead from second-starter Kenny Tremont of West Sand Lake, N.Y.

“I just got a really good start and I saw Kenny was having a lot of trouble getting off of (turn) two,” said Dunn, who won the 2011 championship at Can-Am Motorsports Park in Lafargeville, N.Y. “I found something a little higher on the track. There was a little rubber just coming off the corner, so I was able to get just good enough of a run to get in front of him. Once I got in clean air I just cruised.”

Dunn drove away from the field, easily beating Tremont to the finish line by a commanding 9.347 seconds. Tremont gained entry to the event as the ’11 titlist at Glen Ridge Motorsports Park in Fultonville, N.Y.

Dunn hopes his Safety-Kleen Shootout victory provides him a boost into Sunday’s SEF 200, which is scheduled to take the green flag at 2 p.m.

“That track was definitely different today than it’s been all week so we learned some things, but we still got some work to do,” said Dunn. “We’re gonna give it our best shot.”