The 2021 class of Super DIRTcar Series full-time drivers was one of the most robust groups in series history with 12 championships and 171 wins between them and half the field under 30.

The year proved to be a career year for some, while others will focus on regrouping for the 2022 season, starting in under two months at Volusia Speedway Park during the DIRTcar Nationals (Feb. 14-19).

Before jumping into 2022, which will see the Super DIRTcar Series run nearly 30 events across six states – the first time in 15 years it’ll race at six different states in a year, including the return to Pennsylvania and Ohio – let’s look back at how 2021 fared for the Series stars.

Matt Sheppard / 39 / Waterloo, NY
The 2021 season started off slow for Matt Sheppard, not securing a point-paying top-five finish until the sixth race of the season. But after picking up back-to-back wins at Lebanon Valley Speedway and Ransomville Speedway, he and his team found consistency throughout the summer and fall races. He went on a run of eight top-five finishes in a row, including two more wins and six podiums. That helped him extend his points lead and secure his eighth Series championship before the season-ending NGK NTK World Finals.

“It’s definitely huge,” Sheppard said. “If you can beat anyone of Brett Hearn’s records, I feel like you’re doing something pretty good. He’s obviously the best that’s ever done this. To kind of break, the tie with him and have the most Super DIRTcar Series championships… if you look at the history of the Super DIRTcar Series and look at all the names listed on it, to have the most is definitely very special to me.”

Mat Williamson / 31 / St. Catherines, ON, Canada
Consistency was a struggle for the 2019 Series champion and his Buzz Chew Racing team in the first half of the 2021 season. In one race they’d find themselves outside the top-10 and others on the podium. It wasn’t until fall that they were able to put together a string of good finishes leading to a stellar NAPA Super DIRT Week. Williamson earned his second consecutive Series victory at Brewerton Speedway and second consecutive Billy Whittaker Cars 200 championship – the first driver to win the prestigious race back-to-back while at Oswego Speedway. He then ended the season with two top-fives at The Dirt Track at Charlotte, building momentum for another championship run in 2022.

Billy Decker / 57 / Sidney, NY
In his 32nd season of competing with the Super DIRTcar Series, Decker – the three-time Series champion – continued to be a strong contender despite being unable to find Victory Lane again with the Series. He finished second three times throughout the year, including his spectacular run from 27th to second during the Billy Whittaker Cars 200 at Oswego Speedway. That finish, along with his stretch of three top-five finishes in a row during the fall, helped propel the veteran to a third-place finish in the championship standings.

Peter Britten / 34 / Brisbane, QLD, Australia
Peter Britten had a career year in 2021, earning his first top-five finish in the championship points standings and earning his second career Super DIRTcar Series victory in dominating fashion at Land of Legends Raceway. While he finished outside of the top-10 seven times, many of those were due to circumstances of out his control. For example, he led the first 150 laps of the Billy Whittaker Cars 200 before another car made contact with him that sent him into the wall and forced him to settle for a 16th-place finish. He provided himself with a bit of momentum going into the off-season with a third-place finish at the final race of the season.

“The thing I look forward to the most with racing are the bigger events,” Britten said. “I get up a little bit more for a bigger event. Obviously, I’m looking forward to (the 50th NAPA Super) DIRT Week (Oct. 3-9) and stuff like that. I’m looking forward to Atomic (Speedway, March 25-26). I’ve heard a lot of good things about it. It’s a new speedway (for the Series). I’m excited about that. The SummerFAST stuff (Aug. 16-18 at Brewerton Speedway, Fulton Speedway and Land of Legends Raceway), that’s a cool deal. It’s like a mini speed week deal. Hopefully, everyone gets behind it from fans and competitors and it’ll be a successful deal and we’ll be able to keep doing that.”

Max McLaughlin / 21 / Mooresville, NC
McLaughlin’s third full-time tour with the Super DIRTcar Series – first with the Coffey-McCreadie Enterprises team – resembled a rollercoaster. They started off the year strong with a win at Volusia Speedway Park and claiming the Big Gator Championship, but then struggled to hold a consistent performance the rest of the year. His highs were a third-place finish at Bristol Motor Speedway, two second-place finishes at Weedsport and two top-10 finishes to end the year at The Dirt Track at Charlotte. For the 2022 season, “Mad Max” has the confidence he can contend for the championship with his return to Heinke-Baldwin Racing.

“I think we’re definitely going to be a force to win the championship,” McLaughlin said. “No question. Most people know that. We know that. That’s what really matters. We’re going to do everything we can to go win the points.”

Jimmy Phelps / 46 / Baldwinsville, NY
While Jimmy Phelps ended 2021 without a Series win for the first time in three years, the veteran driver was still able to achieve a couple of career milestones. He made his 400th career Super DIRTcar Series start, earned his 140th top-five and his 250th top-10. His best performance of the season came at Brewerton Speedway – where he won the track championship this year – during his 400th start, finishing second to Mat Williamson. Next year will mark his 25th consecutive year running a race with the Super DIRTcar Series.

Erick Rudolph / 29 / Ransomville, NY
Erick Rudolph’s 2021 stats would suggest he had one of his worst seasons, however, a deeper look shows he had good speed for most of it. What hindered him most was when he was off, he was very off, finishing outside the top-20 five times. He went on a stretch of nine top-10s in 10 races throughout the summer and fall months, with his best performance being a second-place finish at Land of Legends Raceway.

Larry Wight / 29 / Phoenix, NY
Larry Wight had a strong start to the points-paying season, finishing third at Can-Am Speedway. Then, luck never followed him the rest of the year. Despite earning five top-10 finishes in a row during the first half of the season, he didn’t earn another top-five until the fall. His fortune began to turn around, finishing fifth in the Billy Whittaker Cars 200 and then fifth during the first NGK NTK World Finals event. But bad luck plagued him again during the final race of the season, forcing him to a 32nd-place finish. In 2022, he’ll be the sole driver for the Gypsum Racing team as it becomes a one-car team. 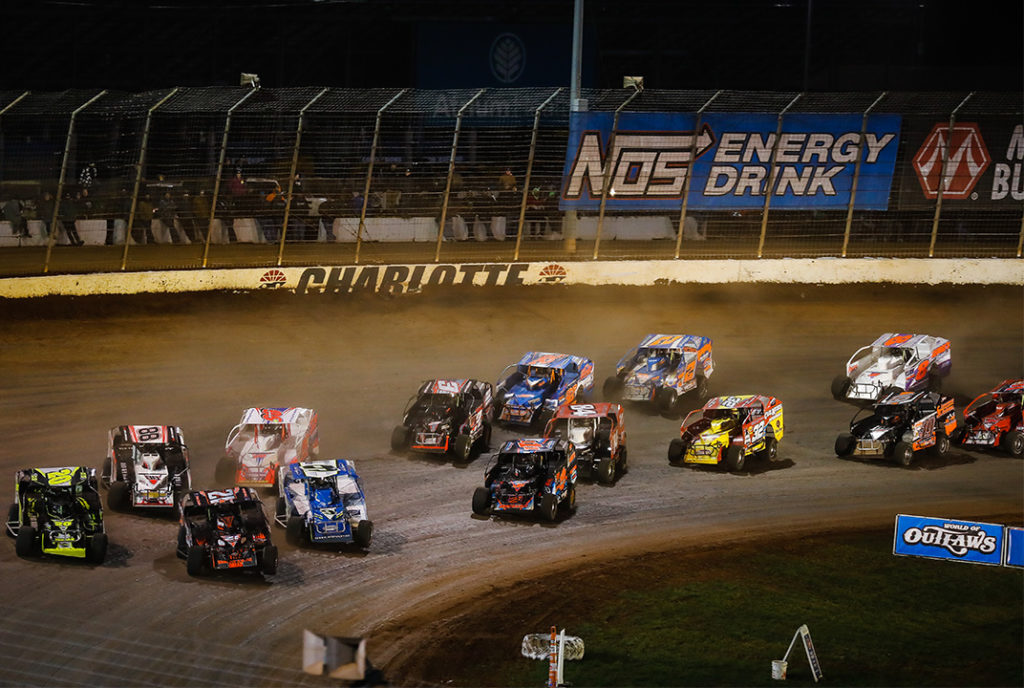 Chris Hile / 34 / Syracuse, NY
Chris Hile had a solid rookie season with the Super DIRTcar Series, finishing inside the top-10 in points and becoming the 40th Rookie of the Year winner in Series history. He joins the likes of Matt Sheppard, Stewart Friesen, Larry Wight and Tim McCreadie to have won the award. His career-best finish of second came at Orange County Fair Speedway. And he put together a solid string of consistency in the fall with four top-10 finishes in a row. He also made his 60th career start this season and earned his 20th career top-10.

Demetrios Drellos / 25 / Queensbury, NY
Demetrios Drellos continued to show improvement during his second full-time season with the Super DIRTcar Series. He earned a career-high three top-fives in a season and matched his career-best of five top-10s in a season. His best performance of the season came during the Super DIRTcar Series’ debut at the iconic Bristol Motor Speedway. In the closing laps of the race, Drellos was running down leader Stewart Friesen to challenge for the win. However, time ran out and he had to settle for second. Then, to end the season on a high note and give him momentum to build off for the 2022 season, Drellos earned back-to-back fourth-place finishes during the NGK NTK World Finals.

Tim Sears, Jr. / 29 / Clay, NY
With support from the likes of John Wight – owner of the Gypsum Racing team – Tim Sears, Jr., a weekly racing star at Brewerton and Fulton Speedways, entered his first full-time season with the Super DIRTcar Series in 2021. He had a strong start to his rookie season, finishing fifth and Can-Am Speedway and then fourth at the challenging Bristol Motor Speedway. However, the second half of the season was a bumpy road for Sears, unable to crack the top-10. He was able to put together a couple of decent finishes before the end of the year with a 15th place finish during the Billy Whittaker Cars 200 and a 14th-place finish during the first NGK NTK World Finals event.

Jack Lehner / 23 / Saratoga Springs, NY
The young rising star had a career year in his second full-time run with the Super DIRTcar Series. He earned his second career top-five and earned a career-high six top-10s in a season. He finished fifth at Land of Legends Raceway and then backed that up with a 10th-place run at the track the same day – his first back-to-back top-10 performance. He ended the year with two respectable runs, finishing seventh and 12th, respectively, at The Dirt Track at Charlotte.

Jordan McCreadie / 31 / Watertown, NY
Keeping the McCreadie name in Big Block Modified racing, Jordan McCreadie – son of Bob McCreadie and brother to Tim McCreadie – joined the Super DIRTcar Series for his first full-time season in 2021. It was a learning year for the rookie, who had only made 10 previous Series starts. His best performance of the season came at Brewerton Speedway with an 11th-place run.

Kevin Root / 43 / Geneva, NY
Kevin Root, a DIRTcar Sportsman Modified star, made the leap to a Big Block Modified in 2021 and made his first full-time debut with the Super DIRTcar Series. While there was a steep learning curve for Root, he still managed to break into the top-15 four times, including a 14th-place finish at the Billy Whittaker Cars 200. His best finish of the year came at Lebanon Valley Speedway with a 13th-place finish. Outside of the Super DIRTcar Series, Root won Rookie of the Year for the DIRTcar Big Block Modified division.

Marcus Dinkins / 29 / Montour Falls, NY
Marcus Dinkins’s second attempt at a full-time tour with the Super DIRTcar Series started off solid for the young driver, earning a top-20 finish at Can-Am Speedway. However, then came some trials and tribulations as he and his team continued to learn the year-long tour. He managed to make eight races, including the Billy Whittaker Cars 200 during NAPA Super DIRT Week, against a stout field of competitors.

Olden Dwyer / 28 / Shaftsbury, VT
Olden Dwyer’s first attempt at a full-time run with the Super DIRTcar Series with his small team was met with several trials and tribulations. He was only able to qualify for five races with his best finish of 16th coming at Orange County Fair Speedway – a track the Super DIRTcar Series will return to in 2022 on Thursday, July 28. And while they were back-to-back 24th-place finishes Dwyer was able to qualify for both NGK NTK World Finals events to end the season.

Dave Rauscher / 66 / Waterloo, NY
At 66 years old, Dave Rauscher entered his 17th consecutive season of running a Super DIRTcar Series event. He qualified for eight of the 19 events this season and his best finish of 18th for the year came at Can-Am Speedway.

If you can’t make it to any of the events in 2022, you can watch every Super DIRTcar Series race live on DIRTVision, including the 50th NAPA Super DIRT Week – either online or with the DIRTVision App.