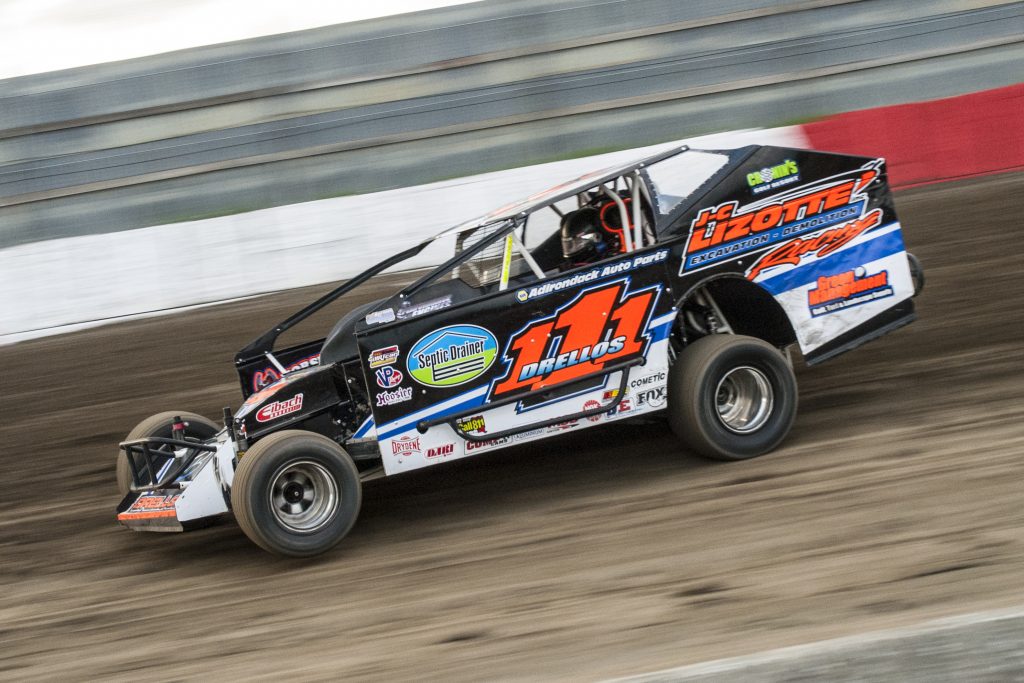 After claiming the $10,000 prize and his first career win at Albany-Saratoga Speedway in 2019 – his hometown Hoosier Racing Tire Weekly Championship track – “Double D” will try to rekindle that success at the start of the 2021 season by trying to start off strong with a win at Can-Am Speedway and Bristol Motor Speedway in April.

“We are on target for chasing the Super DIRTcar Series championship in 2021,” Drellos said. “We’ve got some new ideas and I am hoping that comes with better finishes. We are operating at 110% going into the season.”

Drellos, from Queensbury, NY, has proven himself to be a podium contender at every track the #111 Drellos Motorsports team enters. However, in two Series races at Can-Am Speedway, Drellos hasn’t broken the top 15, yet. He finished 17th in 2019 but picked up the Hard Charger award at 2020’s OktoberFAST event after starting 28th and finishing 19th.

“You have to approach the first race at Can-Am a little different,” Drellos noted. “It’s so early in the season and that means the track is hard and slick from the cold and sun or it’s a little bit muddy. We are going to show up with our best guess as to what the weather is like that day. That’s all you can prepare for. It could be a slick track or completely opposite. You roll the dice.”

Many long hours of wrenching are spent in the family-owned Drellos Motorsports shop in Queensbury, NY. The walls are now decorated with checks from some of his recent wins. He plans to add more to the decor in 2021.

“Ninety percent of setting up a car for a race happens at the shop,” Drellos said. “For most places you want a baseline for what that track is going to be like. You can still do a 180 at the track with the way springs are now but you definitely prepare more in the shop than at the race track for your setup.”

Once the Thunder in the Thousand Islands 100 points-paying opener is settled at Can-Am Speedway on Saturday, April 10, all eyes will be locked on the World of Outlaws Bristol Throwdown at Bristol Motor Speedway, April 22-24, for a pair of $10,000-to-win Super DIRTcar Series Features – which are also NAPA Super DIRT Week Qualifiers.

“I feel very fortunate that I get to go to Bristol Motor Speedway,” Drellos said. “It feels great to be able to go to a NASCAR facility with my own race car. That right there is pretty cool. From what I have seen in the videos is that it’s going to be awesome. There are no cons. It’s only good for us.”

Drivers are working hard to determine the best way to prepare for Bristol. Some are thinking along the lines of the days of racing at the New York State Fairgrounds one-mile clay oval. The speeds were tremendous and cars were reinforced to handle the demanding nature of the unique race track. Others are comparing Bristol to contemporary tracks they’ve raced on like Lebanon Valley Speedway or Eldora Speedway to come up with a game plan.

“I raced at The Mile once in a 358. They misspelled my name terribly but I was there,” Drellos said laughing. “I am thinking of other tracks compared to it though. It has the same clay as Port Royal and The Dirt Track at Charlotte with a long straightaway of Port Royal and the banking of Charlotte. With the red clay, you’ll have a lot of grip. With the banking, you’ll have a lot of grip, and the straightaways are going to give you a lot of speed so it’s going to be pretty fast. With that comes excitement for most people.”

History will be made when the Series hits the Bristol banking for the first time during a special Hot Laps session on Thursday, April 22. Race fans can purchase tickets now for the World of Outlaws Bristol Throwdown by clicking here.

The entire race weekend will be broadcast live on DIRTVision.

Fans will be flocking to Can-Am Speedway on Saturday, April 10 to watch the Super DIRTcar Series kick off the 2021 championship season. Get more info at the track website. The race night will also include DIRTcar Sportsman Modifieds and DIRTcar Pro Stocks competing for Hoosier Racing Tire Weekly Championship points with the added bonus of racing in front of the entire DIRTVision audience.

Both events will set the stage for Drellos’ main goal: win the 2021 Super DIRTcar Series championship.