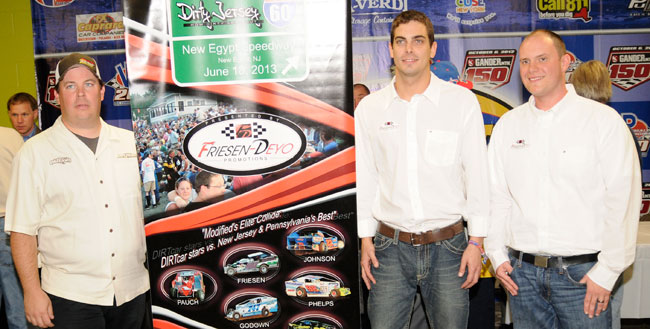 NEW EGYPT, NJ – The dull of winter has set in, but Northeast fans of dirt Modified racing have plenty to look forward to in 2013.

For the first time since 2007, the Super DIRTcar Series for big-block Modifieds returns to the spic-and-span New Egypt Speedway in New Egypt, N.J. The event, an inaugural effort by Friesen-Deyo Promotions, is scheduled for Tuesday evening, June 18. A Wednesday (June 19) rain date has been established.

The 60-lap Modified program will offer full Super DIRTcar Series points and a $6,000 winner’s share from a hefty $27,500 total purse. Matt Sheppard of Waterloo, N.Y., a former New Egypt Speedway champion (2007), secured the Mr. DIRTcar Modified title during each of the last three years. He earned more than $35,000 in point fund cash for his championship in 2012.

“Brett and I are both very encouraged by the feedback we’ve gotten,” said event co-promoter Friesen, whose family boasts a long history on both the competitor and business sides of the sport. “Everyone knows New Egypt Speedway is a first-class facility and the Super DIRTcar Series has a lot of positive momentum. There is a definite value in the Super DIRTcar Series for fans right now.”

Friesen and Deyo will address the media at the upcoming Eastern Motorsport Press Association (EMPA) Convention Jan. 4-6, 2013 at the Crowne Plaza Valley Forge in King of Prussia, Pa. EMPA is one of the largest motorsports media organizations in the nation with more than 250 members. The organization holds the only annual working convention with seminars, press conferences, workshops and an annual Hall of Fame dinner.

Two weeks later, at Motorsports 2013 held at the Greater Philadelphia Expo Center in Oaks, Pa., the ‘Dirty Jersey 60’ support division will be announced by Friesen when he is officially recognized as the Leading Northeast Winner (27 victories) per records maintained by Area Auto Racing News .

Friesen-Deyo Promotions/BD Motorsports Media plans an expansive display at Motorsports 2013 to include the Norm Hansell Motorsports No. 357 and Ryan Godown’s John Chemidlin-backed No. 747. Godown was the New Egypt Speedway champion last year.

To keep posted on news and updates for the ‘Dirty Jersey 60’ Super DIRTcar Series event, please visit www.bdmotorsportsmedia.com or “like” BD Motorsports Media on Facebook.