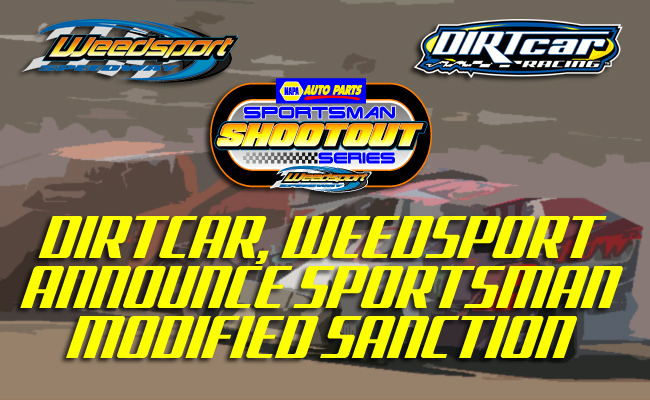 The season kicks off on May 22 at Weedsport Speedway

WEEDSPORT, N.Y. – March 11, 2016 – DIRTcar Northeast and Weedsport Speedway have announced that the track’s 2016 NAPA Auto Parts Sportsman Shootout Series will be DIRTcar sanctioned. The move presents significant benefits for racers and teams at the premier facility.

The previously announced nine race series featuring crate sportsman modifieds kicks off on May 22 at Weedsport with the World of Outlaws Craftsman® Sprint Car Series. The Sportsman Shootout Series runs until Sept. 19 and will accompany the World of Outlaws Craftsman Late Model Series on June 21 and Super DIRTcar Series Big-Block Modifieds for the Hall of Fame 100 on August 9.

In addition to the track point fund and lucrative weekly purses, the DIRTcar sanctioning allows racers the opportunity to make Weedsport a home track and receive home track bonus points in pursuit of the overall DIRTcar championship. Racers will also be able to compete for the Mr. DIRTcar Sportsman points title. The Weedsport Sportsman Shootout Series champion will be honored at the DIRTcar Northeast banquet in November.

“Weedsport Speedway has quickly become a showplace for dirt racing not just in Central New York but in the country,” said DIRTcar Northeast’s Mike Perrotte. “We are proud to join them in sanctioning their 2016 Sportsman Shootout Series. As the leader in sportsman modified sanctioning, DIRTcar is excited to give our racers another great option to compete. We look forward to the exciting season ahead.”

Weedsport Speedway General Manager Jimmy Phelps said they are excited to extend the opportunity to their sportsman competitors.

“Being both track operators as well as competitors, we’ve seen firsthand how working with a structured sanctioning body strengthens the program,” Phelps said. “This is a great opportunity for our Sportsman Series competitors, and we are proud to bring the DIRTcar banner to Weedsport for 2016.”