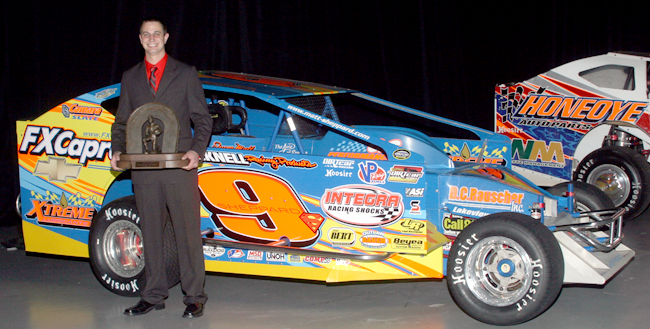 VERNON, N.Y. — Nov. 21, 2011 — More than $250,000 in point fund money and related awards were distributed on Saturday night at the Turning Stone Resort and Casino during the DIRTcar Racing “Night of Champions” celebration, an annual event honoring DIRTcar competitors and teams in the Northeast Region. (Chris Marks photo)

“I’ll tell you what, I was watching the video behind the screen and it showed the guys who had won it before and that old footage and it really gives you the chills,” Sheppard said, referencing a highlight video that preceded him being called to the stage that showed past consecutive Big-Block champions Will Cagle, Brett Hearn, Alan Johnson, Jack Johnson and Bob McCreadie. “Those are the guys who are the heroes of the sport. They’ve won countless races, countless championships. To be part of that crowd really makes you take a step back. It’s really special. It says a lot about the Super DIRTcar Series in general. It has such a great history with so many great drivers. There are so few drivers who have won it two years in a row it just shows how steep the competition is.”

In other awards presented during the event, the top rookies in each division were honored with Motorsports Safety Systems DIRTcar Northeast Rookie of the Year Awards. Michel Chicoine in Big-Blocks, Chris Raabe in 358-Modifieds, Chris Thurston in Sportsman Modifieds and Gaetan Amesse in Pro Stocks were the recipients of nearly $3,000 in combined cash and awards.

During the meeting, Lebanon Valley Speedway was honored as the VP Racing Fuels Track of the Year.

Reports from promoters indicated that despite the tough economy car counts in 2011 remained steady, and working together with fellow track operators resulted in many positives from bigger fields to more fans in the grandstands as they look forward to the 2012 season.

For more information, click Super DIRTcar Series or DIRTcar Racing on the Web.