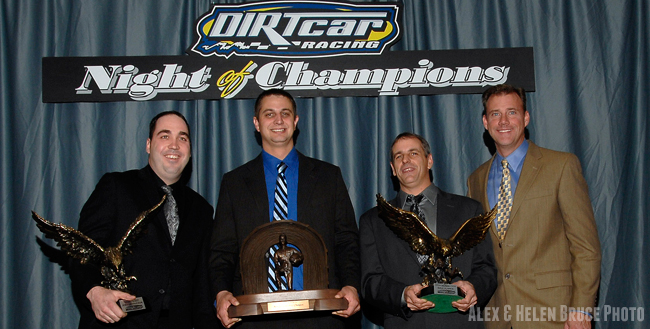 “This is where it’s tough for me,” said Sheppard, as the fact hit home that he had rewritten racing history with his third championship title. “I’m still a fan, I’ve always been a fan. I still picture myself as a 15-year-old rooting on Alan Johnson, and Danny Johnson, and here I am now.”

“There are a hundred different pieces that go together,” Sheppard continued, “and if one of those one hundred pieces isn’t there, I wouldn’t be standing here today, and I definitely wouldn’t standing here three years in a row.”

“It took a little while to get up here after 2004,” said Ladouceur, celebrating his second consecutive Pro Stock Series Championship, but likely his last. The Alexandria, Ontario, native sold his 92 car and is moving to the Sportsman Modified division for 2013, with plans to compete Sundays at Cornwall Motor Speedway and attempt DIRTcar Sportsman Modified Series events.

“I’m ecstatic,” said Sportsman Modified Champion McPherson, who spent a large portion of his time on the circuit battling with brother Tyler McPherson. “It pushed me to do better. I learned from my brother and that’s what helped me win the championship.”

“It was just fun to get back to my roots, running the 358s all the time and running the series,” Planck said.

This year, one driver took his division’s Mr. DIRTcar Championship title with a perfect record. The Mr. DIRTcar point fund gives local drivers a chance to compete for a championship from their home track, counting only the best 16 finishes of the season for each driver. The 2012 Mr. DIRTcar Sportsman Modified Champion Dylan Evoy, of Brockville, Ontario, scored 16 total wins of the 16 finishes counted.

“I learned early on: you’ve got to keep all four (tires) on the ground,” said Wheeler, who hails from Cornwall, Ontario, upon receiving his award. “It was a lot of fun and we had a lot of success.”

“It’s unbelievable to be in the first year, to be able to run with all those guys, and pick up this award,” said 358-Modified rookie Pecore, of St. Andrews, Ontario.

“It definitely helped the learning curve and it helped me get better,” said Wright, of Piffard, N. Y., who was always willing to take advice from more experienced drivers and teams. “Anybody that would listen to me, and give me their two cents, I would take it.”

The racing season may be over in the Northeast as residents brace for the winter ahead, but in just a couple months it heats up again for DIRTcar Nationals at Volusia Speedway Park. The speedway, just minutes from Daytona Beach, Fla., opens Tuesday, Feb. 12, through Saturday, Feb. 23, 2013, for 12 nights of dirt racing at the country’s fastest half-mile.