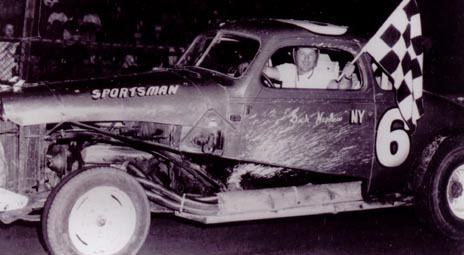 Highly successful Modified-Sportsman veteran and former national points champion Dick Nephew has been named posthumously a 2008 ‘pioneer’ selection for the NorthEast Modified Hall of Fame. Induction ceremonies are scheduled for Sunday, May 25 on the Cayuga County Fairgrounds in conjunction with the Advance Auto Parts Super DIRTcar Series event at the adjacent speedway.

Nephew is estimated to have won over 200 career features in a career which spanned four decades and his supporters eagerly endorsed the induction vote. “Dick Nephew flew under the radar because he raced so much of his career in the rural areas along the St. Lawrence and Champlain Valleys,” said acclaimed racing historian Bill Ladabouche. “The drivers from New Jersey, Pennsylvania and lower New York were the ones of got the attention. Up where Dick raced, it was hard to get noticed, much less honored.”

THE EARLY YEARS
The first race that Dick ever saw was one that he competed in. That was back in 1954 at the just-opened Airborne Park Speedway in Plattsburgh. “I didn’t know whether to run clockwise or counterclockwise,” he joked about his initial outings. He learned his trade quickly and was in victory lane before the ’54 season ended.

Raised on a farm in French-influenced region of Northern New York, the Mooers Forks driver soon became a master on both sides of the New York-Quebec border. Although he drove several different cars for several different owners, Nephew was best known for fielding his own #6. They were red with white numbers and black trim. The history books show Nephew having won at least 15 track championships at six different speedways (Riverside Speedway in Montreal, Quebec Modern Speedway near Quebec City, Airborne Park, Saranac Lake (NY) Speedway, Fort Covington, NY, and Malletts Bay, Vermont).

THE 1961 CHAMPIONSHIP ‘TIE’
Dick Nephew’s legacy will forever be his infamous “tie” for the 1961 NASCAR National Sportsman Division point championship with Bill Wimble. Whether the “tie” was real or whether it was a fabricated whitewash designed to cover-up a mistake by NASCAR officials, may be debated forever.

The 1961 controversy developed its roots a year earlier, when Wimble and Nephew competed fiercely for the 1960 title and Wimble prevailed by a comfortable 1,436 points. The pair of St. Lawrence Valley wheelmen would again be 1-2 in the standings for most of the ’61 campaign, but then with Nephew having the big lead. That was until the autumn of 1961, when Wimble made a late charge for the title in a string of extra-point events.

Nephew and Wimble were neck and neck when the season came down to its final day, Sunday November 5, 1961. There were two races on the slate that afternoon, an extra-distance race for modifieds at the newly-constructed Bristol (Tenn.) International Raceway, and a regular show for sportsmen at the bucolic Otter Creek Speedway just south of Vergennes, Vermont. Both drivers wanted to enter the Tennessee race, because it awarded more points. But there was confusion over whether sportsman-engined cars were eligible to compete against the modifieds at Bristol and to run for sportsman points. Wimble called NASCAR officials and was told “yes,” so he headed south. Nephew called NASCAR officials, was told “no,” and he headed to Vermont.

Wimble qualified for the Bristol feature and nursed a sick car home to the finish. Nephew and the Otter Creek faithful raced through persistent Vermont snow squalls, in a valiant effort to get the show in. Both combatants came home, uncertain whether either had scored enough points to secure the title. A week later, NASCAR announced the results: both men had finished in a flat-footed tie, each tallying 5,578 points.

Wimble thought the “tie” was a bogus compromise intended to cover-up the misinformation which had been conveyed by phone to Nephew. Nephew thought the “tie” was a phony ploy because Wimble was NASCAR’s fair-haired boy and Dick was a rough and tumble “outsider.” And then there was the version offered by respected NASCAR stats maven Morris Metcalf, who swore up and down that the tie was really just that, an honest to goodness tie.

The true answer will never be known, since those 1961 NASCAR records have been buried somewhere near Jimmy Hoffa’s body and the “lost” 13 minutes of Nixon’s Watergate tape.

Real or imagined, the “tie” soured both Nephew and Wimble on the notion of chasing points throughout the country. Both men would spend the balance of their careers closer to home.

The freedom from being tied to only NASCAR-sanctioned tracks blossomed Nephew’s career in the mid-and late-1960s. He ended up scoring seven Plattsburg track titles — some NASCAR, some not. Plus, he became a regular winner and fan favorite at various “outlaw” speedways in the Lake Champlain region, tracks which had no affiliation with the Daytona Beach sanctioning giant.

THE 1984 COMEBACK
Racing in the 1970s was somewhat unkind to Nephew. He had a so-so stint running modifieds on blacktop, followed by an unsuccessful stab at Late Models on Ken Squier’s and Tom Curley’s NASCAR North Circuit. Clearly asphalt didn’t suit the veteran dirt tracker, and he quietly retired from the game.

It was Wes Moody who talked Nephew into a 1984 comeback. Moody had taken over the promotional reigns of the Airborne Park Speedway in Plattsburgh. He knew that Dick was good for box office business because Nephew was arguably the track’s most popular driver ever. In the mid-80s, the ambidextrous Plattsburgh oval—-sometimes clay, sometimes blacktop — was undergoing one of its dirt revivals and, before long, Nephew was back in victory lane on the surface he loved most.

The then 55-year old, grey-haired grandfather told the press that the comeback had been easier than first thought, because the modern cars drove so much better than the coupes and coaches of old. The rejuvenated Nephew again became a top gun on the dirt at Plattsburgh, Malta and Devil’s Bowl. When he won a 100-lapper at Albany-Saratoga in October 1985, Nephew announced his retirement in victory lane. But like Muhammad Ali and Roger Clemens, Nephew’s second “retirement” was no more binding than the first. And he continued to race and win with his Olsen-chassied modified for most of the balance of the decade.

Historian Bill Ladabouche related a funny story about Nephew’s comeback. “Dick was used to the old coupes, cars which had very rigid chassis. The modern modifieds have a lot of chassis and body roll built into them. The first time Dick went into a corner at speed with his new Olsen Eagle, the body and chassis rolled over so much that Dick said he nearly wet his pants, figuring he was going to flip.”

PERSONAL LIFE AND HOBBIES
A gruff man of few words, Dick Nephew may have been one of the most misunderstood stars in racing history. His rough exterior belied the fact that he had the heart of a saint. The risk of polio, unfortunately, was ever-present in his family’s genes and Dick Nephew strived diligently to successfully raise his children, despite their recurrent bouts with the dreaded disease. He also worked doggedly. Dick operated a bulldozer during the construction season, and manned his own speed shop and snowmobile sales/repair store on the side.

Dick Nephew never complained about health, hard work, or lack of rest. When he was running for NASCAR national points, he’d often go three straight days without sleep. Nephew viewed his ability to endure on little sleep as a competitive edge. Yet, somehow throughout it all, he found time to be a proficient hunter and outdoorsman. At one time he held the New York State–recognized record for the largest black bear taken in the Adirondacks. Nephew loved venison and bagged more deer than even he could count. Yet Dick was compassionate enough to maintain in formaldehyde in his race shop the body of baby fawn he had once come upon in the woods.

Indeed, Dick Nephew was a man who seldom spoke, but who accomplished much. He was inducted into the New York State Stock Car Association Hall of Fame in 1990. His induction speech was given by none other than Bill Wimble. Nephew died September 26, 1996. He was 67.