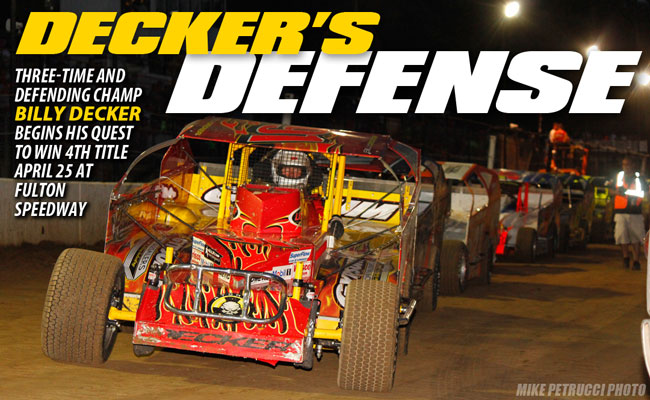 “We’ve been gaining races back in the series,” said Decker, of Unadilla, N.Y. “I think more races at a lot of tracks is a good thing. It’s nice to see DIRTcar take them on. In recent years, you couldn’t afford to have a bad race and still compete for the championship.”

Decker earned the 2014 Super DIRTcar Series crown by a six-points over Matt Sheppard of Waterloo, N.Y. Decker competes weekly on Fulton’s 3/8-mile clay high banks in the Gypsum Racing No. 91, but he doesn’t feel that affords him a significant edge.

“I don’t think the Fulton regulars will have any real advantage,” Decker said. “The top runners in the series are all capable of adjusting to any track conditions. It will be springtime racing.”

Sheppard won three consecutive titles in 2010-11-12 and begins his third season as a teammate to Jimmy Phelps at Weedsport-based Heinke-Baldwin Racing. New Jersey’s Brett Hearn, an eight-time series champion with 861 career victories, and Stewart Friesen, a three-time NAPA Super DIRT Week Syracuse 200 winner, will also be among the large field of Big-Block Modifieds anticipated for the Fulton opener, which also includes the first race of the DIRTcar Sportsman Modified Series season. One of the most versatile drivers in the Northeast, Friesen will be taking his first shot at a series championship by racing the series full-time in 2015.

As the event takes shape on Saturday night at Fulton, two key partners will play a big role. The first 12 positions on the Highbank Holdup 100 starting grid will be set during the Dig Safely NY 811 redraw following qualifying heats, and the driver clocking the fastest lap in time trials will receive the Pole Position Raceway Fast Time Award ($100).

“Dig Safely NY 811 and Pole Position Raceway have been tremendous partners to DIRTcar Racing, stepping up to enhance not only NAPA Super DIRT Week but every Super DIRTcar Series event,” DIRTcar’s Jeff Hachmann said. “We look forward to their involvement beginning at Fulton and then each event through the Bad Boy Buggies World Finals.”

The Highbank Holdup Weekend at Fulton Speedway kicks off on Friday, April 24, with Big-Block Modifieds, NAPA Late Models, Pro Race Cars Mod Lites, E&V Energy Novice Sportsman and a DIRTcar Sportsman Modified practice. The Super DIRTcar Big-Block Modifieds and DIRTcar Sportsman Modifieds are the focus on Saturday, April 25, when grandstands are slated to open at 3 p.m. with hot laps at 4:45 p.m., qualifying at 5:15 p.m. and racing at 6 p.m.

The Super DIRTcar Series’ second event of the 24-race tour is set for Wednesday, May 20, at Canandaigua Motorsports Park..