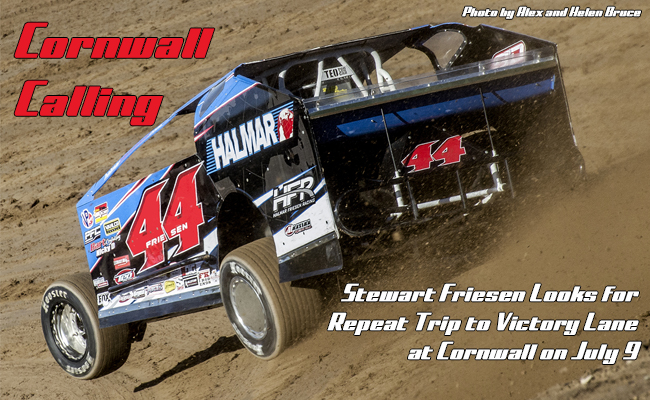 CONCORD, N.C. – June 30, 2017 – The Super DIRTcar Series is set to roll north of the border for the first time in 2017 when it invades Cornwall Motor Speedway on Sunday, July 9. It marks the Series’ only stop at the high-banked quarter-mile this season, which means the fans and drivers alike are sure to flock to the action-packed Eastern Ontario track.

Stewart Friesen, originally from Niagara-on-the-Lake, ON and now residing in Sprakers, NY, is the defending winner of the event. The 23-time Super DIRTcar Series winner looks forward to his annual trip to Cornwall, he said.

“It’s pretty neat. Anytime you get the Big-Blocks on a track like that that’s fast and racey, it’s a lot of fun,” Friesen said. “It’s super fast for the size of it, so things happen quick. We had a great race with Matt Sheppard there last year and we were able to come out on top, so that was cool. We have a lot of friends up there, so we look forward to going there.”

While he has two Series races before the stop at Cornwall, Friesen is still looking for his first win with the Super DIRTcar Series this season. Fortunately, he has the benefit of a winning notebook heading into the event.

“We’ll just look back to our notebook from the previous year,” Friesen said of his preparation for the July 9 event. “Going there last year for the first time in a number of years and coming in blind was kind of neat. It kept us fresh and we didn’t bring any bad habits with us. This year we’ll go in there and hopefully we can get the ball turned around on the Series and get some good top-threes and good top-fives and hopefully sneak one out again. It was pretty cool last year.”

Cornwall has a unique configuration compared to most tracks the Series visits. The high-banked corners were carved out of the track rather than built up, which creates a unique infield berm at the bottom of each turn.

“It’s neat because it’s one of the tracks that doesn’t have yuke tires, which is nice, but it has a defined bottom groove,” Friesen explained. “You can get your left front up on the infield a little bit, but it’s not really the super fast way to go. It has two defined grooves and its technical for the size of it.”

The track has been described as resembling an “angry cereal bowl” where drivers tend to carry plenty of speed around the track. Usually that means a quick reaction time is necessary to evade traffic, especially during the 100-lap Feature.

“That’s pretty close to right, I’d say,” Friesen said with a chuckle when asked about the description of the track. “For 100 laps you’re up on it and the laps go by really fast, but it’s exciting. You get right up to the edge of the track and there’s also a good bottom there. You want to have a free racecar and be up on the wheel because things happen quick.”

Cornwall is also a driver-favorite track because of its passionate fan base. With the Super DIRTcar Series only visiting the track once per season, the Cornwall faithful turnout in abundance to cheer on their favorite drivers and they aren’t shy about it either.

“We always look forward to going there. It’s great to go somewhere with a great fan-base like that,” Friesen said. “I think Cornwall is very similar to Grandview in Pennsylvania with the fan-base, the amount of fans and the way they pack the place. It’s exciting for us when we come up there.”

The Super DIRTcar Series’ stop at Cornwall Motor Speedway on July 9 is presented by Les Entreprises ICM. Race time is scheduled for 6:30pm. General admission tickets will be available at the track on race day. For additional event information, visit www.cornwallspeedway.com and www.superdirtcarseries.com.