Class of 2018 Inducted into DIRT Hall of Fame 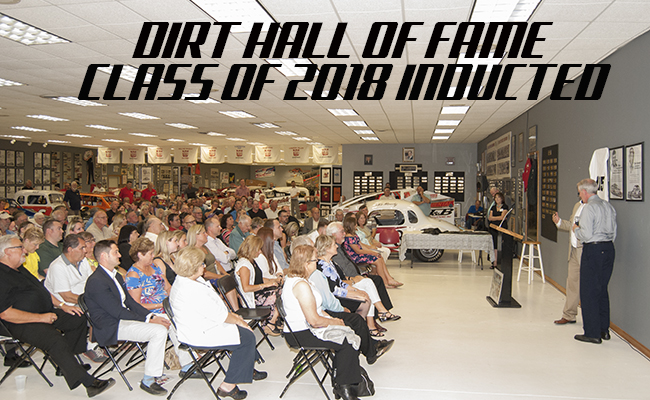 Tremont, Swartzlander, Troyer, and Spaid Among Those Recognized by DIRT Museum and Hall of Fame

WEEDSPORT, NY – July 27, 2018 – The Class of 2018 was inducted into the DIRT Hall of Fame in front of a who’s who of motorsports in the northeast. Past Super DIRT Week Champion Kenny Tremont Jr., western Pennsylvania hot shoe Brian Swartzlander, and legendary driver Bob Rossell were permanently enshrined within the hallowed walls of the DIRT Museum and Hall of Fame. The DIRT Museum and Hall of Fame not only recognizes the legendary drivers, but also the outstanding men and women who work behind the scenes. Gary Spaid, Linda Cosco, Gene DeWitt, and Maynard Troyer all received lifetime achievement awards from the Hall of Fame.

As the ceremony’s MC Shane Andrews said, “If only these walls could talk”. The ceremony did not need talking walls on that night, as the incredible stories of triumph flowed from the many guest speakers that introduced those honored. Kenny Tremont Jr. has 108 career wins including two this year, one at Lebanon Valley Speedway and other at Albany-Saratoga Speedway. Tremont was so dominant in the past at Lebanon Valley Speedway that fans began turning in their season tickets because they knew he would win every week. But that’s not to say it came easy. Early in his career it looked like his sister might be the family’s ace driver, but as time went on Kenny Tremont Jr. amassed multiple track championships, and in 1999, finally won Super DIRT Week at the Syracuse Mile. 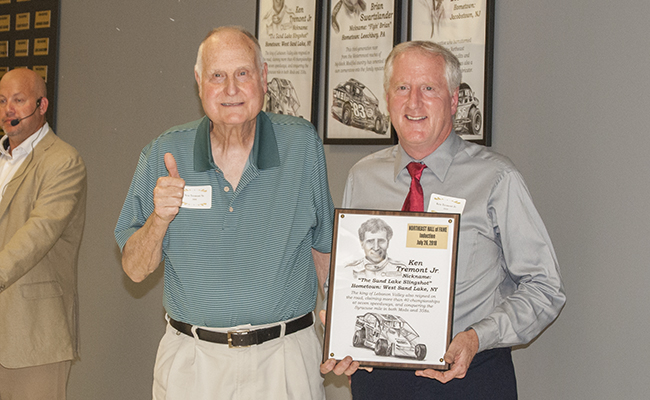 Brian Swartzlander, a Big-Block Modified hero in Pennsylvania was also inducted into the DIRT Hall of Fame for his accomplishments behind the wheel. Swartzlander captured many track championships and wins including one Super DIRTcar Series win at Sportsman’s Speedway in Pennsylvania in 1998. Swartzlander has fifteen track championships including seven at his current home track of Lernerville Speedway. He and his team are chasing 100 wins at Lernerville Speedway, and leads all drivers there in wins.

Bob Rossell was a true pioneer of auto racing. His career as a driver and car-builder put him in a league of his own. With a beat-up Chevy and an engine from the junkyard, Rossell began racing in 1958. With those meager beginnings, Rossell propelled himself to the top of the pile with huge wins, such a Syracuse Qualifier at East Windor Speedway in 1972 as well as a 200-lap NASCAR victory at Old Dominion. Rossell was also a staple of the All-Star Racing League. His car-building skills are not to be ignored either and many consider him one of the best.

A man of many hats, Gary Spaid received the 2018 Leonard J. Sammons Jr. Outstanding Contributions to Auto Racing Award for his work as racing Historian, writer, race director, and scorer. Gary Spaid is one of those individuals who, if everything goes perfectly, you would never know he was there. As very intelligent man, Spaid made his living as a Business teacher in Central New York, but on the weekends, he worked closely with local race tracks and the Super DIRTcar Series as head scorer. His innovations took the guess work out of scoring, and then into the modern era with computerized scoring. Spaid continues to his work with the Super DIRTcar Series, as well as Land of Legends Raceway and Weedsport Speedway today.

Maynard Troyer, legendary driver and car-builder, passed away early in the Spring of 2018, but before he passed, he was informed that the DIRT Hall of Fame would be recognizing his achievements. His son Kenny Troyer accepted the Mechanic Engineering Award on his behalf. Although Kenny noted that his father did not relish the spotlight, the accolades are more than well-earned. Troyer was a smooth, fast, and gentlemanly racer, but he made his name as a car-builder. Troyer race cars are still built today under the guidance of Billy Colton. The Troyer name will forever be synonymous with northeast dirt and asphalt modifieds.

Don and Jo Ann Davies received the Andrew S. Fusco Award for Media Excellence. Known for their honesty and integrity, many industry professionals look to them as a shining example of responsible and insightful auto racing journalism. The couple got their start in 1972 and continue to write today. Their passion for racing and work ethic comes out in every piece they publish. Promoters, drivers, and the media appreciate their high-level of professionalism. They have set the bar high for all those writers who come next.

The Car Owner Award went to Gene DeWitt who took home over 200 checkered flags and three NAPA Super DIRT Week Championships with drivers like Brett Hearn and Danny Johnson. DeWitt is very humble about his own work and accomplishments. He chalked up his success to having generous sponsors and some of the best drivers to ever wheel a Big-Block Modified. He noted that while Danny Johnson was a pure driver, with the highest level of racing instinct, Brett Hearn was a cerebral driver, neither one necessarily better than the other.

Linda Cosco took home the Outstanding Women in Racing award for her work promoting, managing, and owning Humperstone Speedway in Ontario. Unfortunately, her husband Pete Cosco passed away in 2014 leaving her to run the speedway and run it she has to great success. Linda Cosco continues to work the day-to-day operations at the track with help from her family.

The Super DIRTcar Series wishes to congratulate all of the award winners, especially one of our own, Gary Spaid. 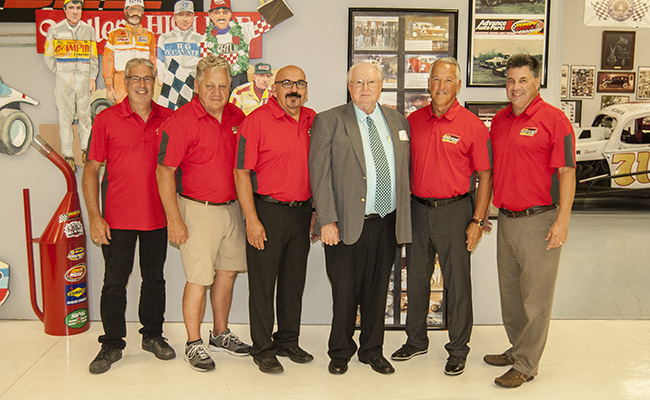