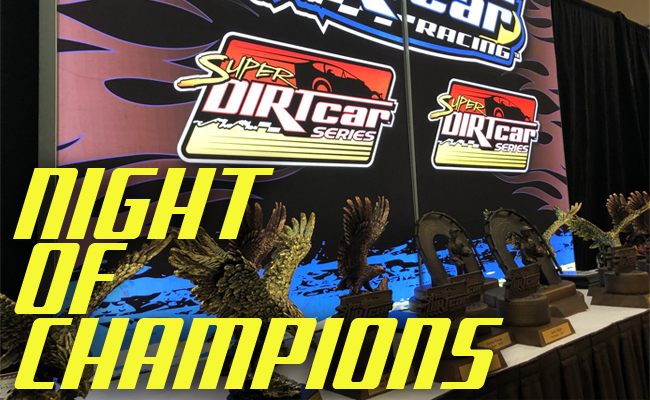 SYRACUSE, NY — Nov. 20, 2017 — The Northeast DIRTcar Racing industry gathered on Saturday night to celebrate the many accomplishments throughout the 2017 racing season, handing out over $200,000 dollars and special awards while honoring the champions for another great season.

The Night of Champions kicked off with the acknowledgement of the many tracks, sponsors and teams that gathered in the banquet hall at the Holiday Inn in Central New York.

A very special recognition was made for Bear Ridge (VT) Speedway and the Elms family were honored as Bear Ridge Speedway celebrated its 50th year of operation.

Following the warm reception, DIRTcar Racing honored and recognized the Mr. DIRTcar champions for their efforts and success. For the sixth year, the Mr. DIRTcar Home Track Points Championship pitted racers throughout the Northeast against one another based on their best 16 finishes in their respective division at any DIRTcar Racing sanctioned track.

With 18 wins, 34 top-five finishes and 46 top-10s, Rocky Warner collected the Sportsman Modified Mr. DIRTcar Championship. Warner walks away with $1,000 from the point fund and a $750 fuel certificate from the VP Racing Fuels.

“We had an awesome year. [Dave] Marcuccilli ruined October for us, but we can’t be disappointed with 25 total wins on the 2017 season,” said Rocky Warner. “We came into the season with a goal of winning this championship.”

In the 358 Modified ranks, a familiar face once again walked away with the Mr. DIRTcar Racing Champion. David Herbert was crowned champion for the fourth consecutive time, fifth overall. For his efforts, Herbert collected $3,000 from the point funds and $1,000 in VP Racing Fuels certificate.

“I was asked earlier if I thought I could win the most popular driver, and I said no way, that guy [as McLaughlin pointed to Matt Sheppard] is definitely the most popular,” said Max McLauhglin. “It’s definitely an honor to be recognized by the fans. This means a lot to me.”

Following a brief break for dinner, the Super DIRTcar Series champion, Matt Sheppard participated in some entertainment provided by magician, Magic Lou. The highlight of the skit was when Magic Lou made a $100 bill with Sheppard’s signature disappear into the middle of an orange.

When the awards continued, Rob Yetman returned to the stage to collect his hardware for his stellar season which included a fifth consecutive NAPA Auto Parts Super DIRT Week victory at Oswego Speedway.

“Everywhere we went it seemed like we had a little something at the end, but what a year!” said Rob Yetman, “There was non-stop digging in the garage; I can’t thank everyone enough for their effort.”

The night of celebration wrapped up with the Super DIRTcar Series. The top-15 in Series points were recognized but taking home the top honors was Matt Sheppard. In one of the greatest comebacks in Series history, the Waterloo, NY driver overcame a 185-point deficit to capture his sixth Super DIRTcar Series championship. During his stellar run through the summer months, Sheppard racked up five straight wins en route to his 12 overall; tying the single-season win recording that he set in 2016.

“It feels as good as the first one did,” proclaimed Matt Sheppard. “We got to a point where we were taking a different approach on it. We put a lot of pressure on ourselves and worked hard night-in and night-out and [team] kept saying we need to win this championship. We kind of made the turn somewhere this Summer and said let’s just have fun and go out and race and see what happens. I feel like we are having the most fun we’ve ever had and we’re winning the most races we’ve ever had; I don’t know if the two go hand-in-hand with each other but its working for us.”

In front of a room full of talented drivers, Master of Ceremonies Shane Andrews asked Sheppard if he felt like he considers himself elite.

“I grew up a fan of this sport and as a kid I watched Alan [Johnson], Brett [Hearn] and Billy [Decker], it’s just a pleasure to race with these guys but I can’t classify myself as in the same category as those guys,” added the six-time champion Matt Sheppard.

Following the Mr. DIRTcar champion recognitions, winners were chosen for the Number One Speed /Motorsports Safety Systems / G-Force Rookie of the Year Awards. These drivers are the next great stars in DIRTcar Racing and were recognized for their triumphs this season. This year’s winners were: Cody Bleau in the Big-Block Modifieds, Jesse Cotriss in the 358 Modifieds, Tyler Thompson in the Sportsman Modifieds and Josh Coonradt from the Pro Stocks.

In under 80 days, the 2018 season kicks off once again with the Big-Block Modifieds. The stars of the Super DIRTcar Series visits Volusia Speedway Park during DIRTcar Nationals. New for this year the Super DIRTcar Series will take to the track for an extra night, showcasing the Big-Block Modifieds for five nights. Visit DIRTcarNationals.com for tickets.