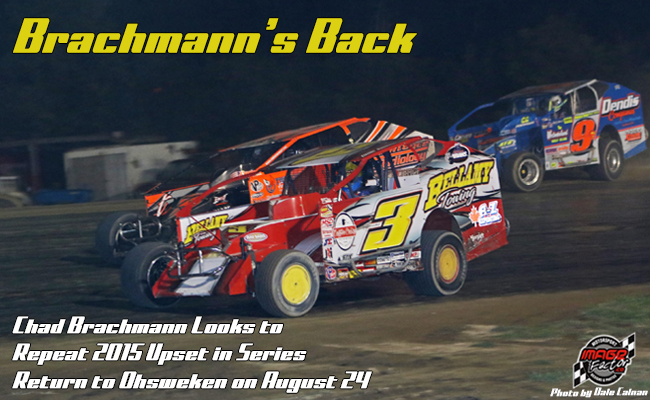 CONCORD, NC – August 18, 2017 – When the Super DIRTcar Series resumes action with its second-ever visit to Ohsweken Speedway on August 24, the winner of the inaugural stopover will look to repeat his triumph. Chad Brachmann of Sanborn, NY earned his first career Super DIRTcar Series win in the first-ever Triple Crown Showdown at Ohsweken on June 30, 2015 in what remains one of his greatest career accomplishments to date.

“The biggest thing I remember is finishing the redraw and thinking about how many good cars I had to pass to get to the front,” Brachmann recalled.

On the June night two years ago, Brachmann won his heat but pulled the number 11 starting position in the redraw. It didn’t bother him though as he raced through the top-10 and took the lead from Dale Planck on lap 63 before leading the final 13 laps to score the win.

“(The emotions) were overwhelming,” Brachmann said. “Knowing that it was the first race there for the Super DIRTcar Series and being my first Series win, it was pretty cool.”

Now Brachmann enters this year’s Triple Crown Showdown at the top of his game. The driver of the Chris Bellamy-owner No.3 is the current point leader in weekly DIRTcar 358 Modified competition at Merrittville Speedway where he has four wins to his credit so far this year.

He also earned a fifth-place finish in his first Series start of the season at Merrittville for the Bob St. Amand Memorial last Wednesday. As strong as Brachmann has been so far this year, he knows he’ll have to find another gear in order to beat the talented cast of Super DIRTcar Series full-time drivers for the second time.

“I don’t think there’s a greater feeling than to be able to run against the guys on the Super DIRTcar Series because you know what the level of professionalism is with the whole group,” Brachmann said. “You have to step up your game to the next level to compete with the guys when they come in just because of the amount of knowledge and experience they have.”

Brachman’s talent behind the wheel has certainly been a core part of his success this season, but he’s also quick to pass the credit where it’s due.

“I have a good team with myself and my dad working on the cars,” Brachmann said. “Chris Bellamy is the owner of the car and he basically provides me with everything I need to run well and be consistent.”

Clearly Brachmann has his program pointed in the right direction this season. Reaching the next level on Thursday night in order to repeat his impressive accomplishment will require a level-headed approach, he said.

“The key is going to be to keep it simple and don’t beat ourselves before we even get there,” Brachmann detailed. “We have to take the day as it is, the track conditions as they come and try to make the right calls and not try to overthink it.”

The Super DIRTcar Series returns to Ohsweken Speedway on Thursday, August 24 for the Triple Crown Showdown. The event also features 360 Sprints Cars and Crate Late Models with a $25,000 bonus to any driver who can win all three events or a $5,000 to win two. Super DIRTcar Series driver Stewart Friesen will be among the contenders competing in all three events. For additional event information, including advanced reserved tickets, visit www.ohswekenspeedway.ca.