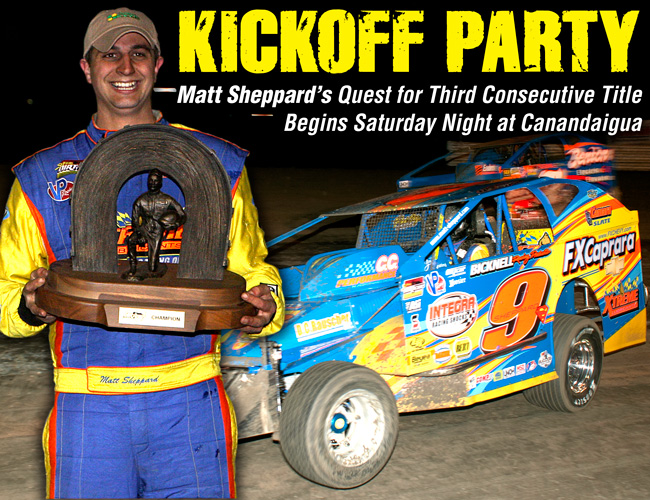 CANANDAIGUA, N.Y. – April 3, 2012 – There always is an element of anxiousness with the start of something new. After a winter to rebuild and retool, the intensity of Super DIRTcar Series Big-Block Modified racing returns on Saturday night, and the mood will be electric.

The Jan Corcoran Memorial is set to kick off the 2012 Super DIRTcar Series season on Saturday night at Canandaigua Motorsports Park, and if the Florida Tour in February was any indicator, the action will be fast and furious. In four events during the winter break in the Sunshine State there were four different winners, including Matt Sheppard, the two-time defending series champion.

Sheppard clinched his second consecutive Super DIRTcar Series title on the final day of the 2011 season, edging Billy Decker for the crown at the Lowes Foods World Finals in Charlotte. It was a reminder to teams of the importance of every checkered flag, no matter if it comes in April or November.

“The way it shakes down with it being so close at the end of the season, it definitely goes to show you that every single race counts,” said Sheppard, who had four wins, 11 top-fives and 14 top-10s during the 2011 Super DIRTcar Series tour. “One bad night at Canandaigua could put us out of contention at the end of the year. It’s like that every race all season long. We try to go to every series race 100 percent ready. You have to take it one race at a time, you can’t get ahead of yourself and think about races down the road because every race is important.”

That leads to Saturday night’s event at half-mile Canandaigua, where promoter Jeremie Corcoran has been masterful at preparing his venue to race. Between the Florida Tour in February at Volusia Speedway Park and the mild winter — by New York standards — many drivers had a chance to shake down their cars, but nerves always return when points are on the line.

“The front end of the season is always exciting,” seven-time Super DIRTcar Series champion Brett Hearn said. “You hope what you did over the winter was the right stuff. You’re always trying to build a better mousetrap. We’re just kind of feeling our way out. It’s the beginning of the season and we’re hoping that when the races count, and this one at Canandaigua is the first one that really counts, that we’re ready for them.”

The track earned rave reviews from competitors last season at the inaugural Jan Corcoran Memorial, which adds to the excitement level as this weekend approaches.

“We ran there last year and I never saw that track in that kind of shape, it was better than ever,” Hearn said. “Normally I would be concerned with this track this early in the season up there because it’s still the end of winter, but with the milder weather and Jeremie doing the track I think you’re going to see some great conditions and some really wide corners where guys can move around and race. I anticipate a kind of track where you can run three-wide no problem.”

That kind of racing will no doubt bring the fans out of their seats.

On Saturday night, the mix of cars will feature rising stars and veteran racers. Sheppard and Hearn believe the drivers who regularly compete at Canandaigua during the season will have the upperhand Saturday night.

“It took me a long time to like that place and get good at that place,” Hearn said. “There was a time when I couldn’t do anything there. We finally got a handle on it the last five or six years, but I think the advantage goes to the guys who run there every Saturday night.”

Ask Sheppard and there could be any number of surprises on Saturday night.

“It’s the first race of the year at Canandaigua, anything is possible,” Sheppard said. “There’s probably 20 different cars that could win. You just really don’t know what to expect, you just to bring your ‘A’ game, and hope your ‘A’ game is a little better than some other guys’ ‘A’ game. I guess we’re going to find out in a few days how it’s going to shake out.”

WHAT: Jan Corcoran Memorial, the $6,000-to-win, 64-lap season-opener for the Super DIRTcar Series as well as the opener for Canandaigua Motorsports Park.

WHERE: Canandaigua Motorsports Park at the Ontario County Fairgrounds in Canandaigua, N.Y.