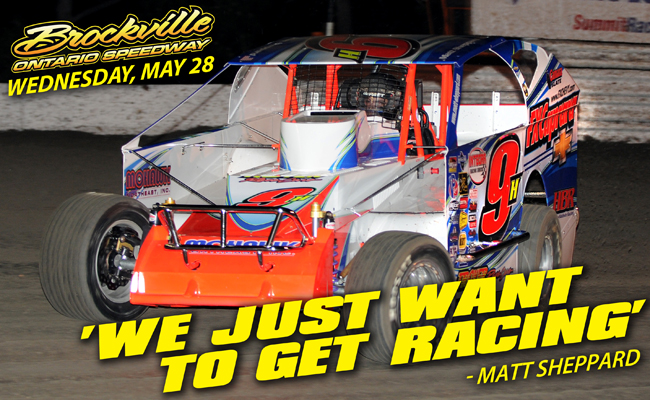 Big-Blocks to battle at Brockville May 28

WEEDSPORT, N.Y. – Friday, May 9, 2014 – With summer just around the corner, the Super DIRTcar Series is about to kick into high gear with its Northeast opener Wednesday, May 28. The 100-lap race at Brockville Ontario Speedway in Brockville, Ontario, marks the series’ first Ontario opener in its 42-year history.

Many of the stars of the Super DIRTcar Series are already warming their tires, racing at their home tracks to test the changes they made during the off-season. Three-time series champion Matt Sheppard said he is looking forward to how some of his changes will play out in the first series races.

“I see it going good,” said Sheppard, who sports a new car and a new look after joining forces Heinke-Baldwin Racing. “We’ve already won a couple races, and I don’t think we’ve finished worse than fifth yet, so it seems to be a promising start. But we’ve got to get racing a little more to see how things shake out.”

Sheppard debuted the HBR FX Caprara Car Companies No. 9H this past February in Florida during DIRTcar Nationals presented by Summit Racing Equipment, where he took home a top-five finish in every feature and a victory in the finale. The new ride may be the fresh start Sheppard needs to add a fourth Super DIRTcar Series championship trophy to his shelf.

“We’ve got some good guys over here. We’ve certainly got some good race cars,” said Sheppard, who, due to weather, has only finished a couple regular-season races so far in 2014. “We’re just really looking forward to getting started here. It’s been a really long winter for the team and everybody’s worked really hard. The cars are done and ready to go. We just want to get out there and get racing.”

* Note: To be eligible to compete at the 8th Annual World Finals a driver must attempt to qualify for a scheduled Super DIRTcar  Big Block Modified Series event during the 2014 calendar year (this includes the 43rd Annual DIRTcar Nationals at Volusia Speedway Park).* Note: All Super DIRTcar and/or Mr. DIRTcar Series events are “Syracuse Qualifiers” offering a “Preferred Qualifying Position” for Super DIRT Week XLIII.