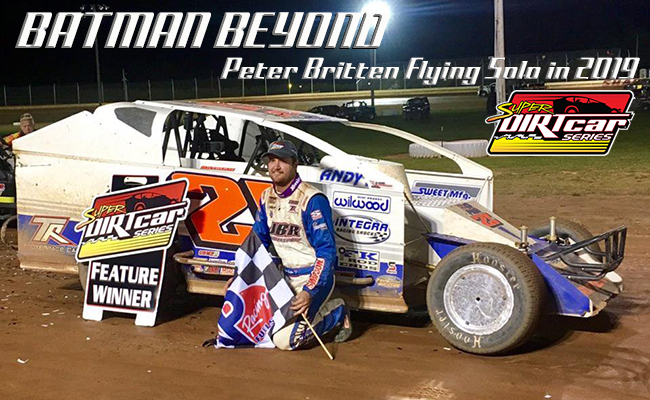 CONCORD, NC – Peter Britten has had many titles in his 31 years of life: Albany-Saratoga Speedway Track Champion, Australian V8 Dirt Modified Champion, Batman, and now perhaps the most challenging of all, car owner. After parting ways with Ray Graham’s racing operation at the end of 2018, Britten knew it was time to try something new. The Batman from Queensland, Australia, is fielding his own equipment in 2019 as he makes a run at the Super DIRTcar Series Championship. The no. 21a is also slated to go for another Track Championship at Albany-Saratoga Speedway.

For Britten, the time is right and the Big-Block Modified landscape is certainly fertile enough to start his own team. However, he knows it won’t be without its challenges. Being a car owner is, “a little bit of a double-edged sword. There’s a little bit of excitement. It’s nice to have your own stuff for sure. You have a chance to build your own team up. On the other hand, having to be a car owner isn’t necessarily all that fun sometimes, especially in the beginning. I am building up the team from not much at all. There’s a lot involved to get the thing up and rolling. It’s a lot of work but at the end of the day it’s the right move for me right now.”

There isn’t much “off” in Britten’s off-season. When he’s not keeping in shape, working in the shop, or representing Troyer at trade shows, he’s being a dad to his three-year old daughter Addison. Ever since the final checkered flag fell at the Can-Am World Finals at the Dirt Track at Charlotte, Britten has been a busy man. “I’m not just a driver. Dylan, who works in the shop, and I do everything ourselves, so I am very hands on with everything I do. You mix into that some responsibility with Troyer, going to the Philadelphia Race Car and Trade Show, PRI, and the Syracuse Motorsports Expo – there’s not that much of an offseason. Meanwhile I’m trying to be the best Dad I can be,” said Britten. One of the benefits of owning his own racing operation is that he can choose his hours: “Instead of working all night, I can put down the tools at a regular hour and spend the time with Addison.”

One of the constants in Peter Britten’s American racing career has been his friend and fellow Super DIRTcar Series racer Rich Scagliotta and that won’t change in 2019. “We’ve always had a very close relationship. I consider them part of my family. We’ve been racing together for a long time now. Apart from the year I raced at HBR, we’ve raced out of the same trailer my whole career now. It almost doesn’t seem right going racing without mine and Rich’s car out of the same hauler. He owns the truck and trailer. He’s nice enough to cart my car around wherever we go racing. Obviously, that’s a big help because as we all know the price of fuel and the cost of owning a hauler is a lot. I wouldn’t be able to do this without their assistance,” Britten explained.

Last year, Britten was forced to sit out the DIRTcar Nationals at Volusia Speedway Park due to a back injury. Fortunately, the rest helped him heal and he did not aggravate the injury during the rest of the 2018 season. Despite the setback and the pain, Britten managed to finish seventh in Super DIRTcar Series points. “My back is on the mend. If you talk to anyone with serious disc issues, it’s not something that goes away quickly. It takes a lot of time and you keep working at it. I have made a lot of progress from a year ago to this point when I unfortunately had to miss Florida. I’m not going to go jumping on trampolines or running marathons any time soon, but it’s well enough that I can work. I just have to be careful with everything I do and how I do it.”

This year Peter Britten will enter the DIRTcar Nationals feeling fit and confident behind the wheel of his own Troyer-built Big-Block Modified. Despite not being a points-paying race for the Super DIRTcar Series Championship, there is plenty at stake at the DIRTcar Nationals. It’s a proving ground. It’s a preview of the season and a who’s who in the world of dirt track racing. No one wants to miss it and Britten approaches racing in Florida a little differently than other drivers: “Everybody says, “Whatever happens in Volusia doesn’t matter because it’s nothing like what we race on” but I don’t buy into that theory. There are tracks that we go to that are similar, and in reality, every race track we go to is different. We go to tracks like Eldora and Charlotte, and I would say those two are very similar to Volusia. Anywhere that’s big and round is on the same scale. The track is very fast normally. It does fluctuate night-to-night though. The track is different every night so it keeps you on your toes. Like anything, you take it as it comes.”

One of the biggest pieces of news to come out of the off-season was the increase in Super DIRTcar Series purses to $7,500 to-win and $500 to start for standard races and NAPA Super DIRT Week Qualifiers are to pay at least $10,000 to-win. Britten sees this as a sign of strength amongst the DIRTcar sanctioned tracks. “It’s been good to see that the purse increase has been well-received by all the track promoters, even to the point that a lot of them have taken the $10,000 to-win option as well. I think it says a lot for the state of racing right now. In recent times, it’s the strongest the scene has been. It’s great to see it progressing forward and not in the downward spiral. For me, as a car owner it’s very exciting because every dollar counts. It’s good to see the sport progressing and hopefully it can continue,” Britten said enthusiastically.

Furthermore, Britten likes seeing more high-profile tracks outside of the core DIRTcar Northeast facilities added to the schedule, such as the additions of Eldora Speedway and Sharon Speedway. “Sharon Speedway has a special place in my heart because that’s where I got my first Series victory. To me, the Series needs to go to those places. You want to venture out and get the Big-Block Modifieds in front of people who don’t normally see them. If your Series or class of racing on dirt wants to be taken seriously, you need to go to Eldora. They are one of the tracks that are going in the right direction. It makes me happy to see the Series going to tracks like that.”

When Peter Britten isn’t on the Super DIRTcar Series, fans can catch him every Friday night wheeling his no. 21a Big-Block Modified against some of the best drivers in the country at Albany-Saratoga Speedway. “There’s a lot of places you could race at on the weekend. I am a big fan of what they do up at Albany. Over the years I’ve developed a good relationship with Lyle, the promoter up there. It’s no surprise that he was able to win Promoter of the Year last year. It tells you the job that he’s been doing. There are tracks going in the right direction and others are going in the wrong direction. Albany is leading the pack in the right direction. That makes it a good choice for me to base some of my racing at. I’ve had success there too,” Britten explained.

Britten has unfinished business at the Malta, NY race track. “I won the track championship a year ago. I wasn’t able to defend this past season because of my back issues and some other unfortunate events. I feel I have some unfinished business there. I want to get that Track Championship again. You race at the same track for years and you develop a good fan base. I’d like to keep racing there for a long time in the future and set that as my home base and venture out from there. I want to build a good relationship with the fans and Lyle and I want to do this for a long time to come. I want to get as much fan support as I can. I’d like to keep working on getting as many track championships as I can there.”

Race fans can catch Peter Britten at the DIRTcar Nationals February 12-16 at Volusia Speedway Park. Get your tickets now at www.DIRTcarNationals.com.