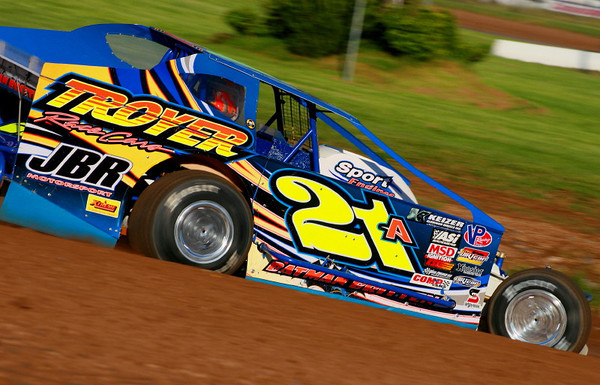 SYRACUSE, N.Y. — June 27 — One look at the great drivers throughout the legendary history of the Super DIRTcar Series and three traits jump out at you. Those drivers have all shown dedication, passion, determination and pure drive to be the best, not satisfied with second place. After a fantastic start to his Super DIRTcar Series Big-Block Modified season, Peter Britten has the world of dirt modified racing buzzing, and shares those same traits with the legends that have come before him.

Britten, 23, hails from Brisbane, Queensland in Australia where he’s the three-time defending champion of the Australian V8 Dirt Modified Series — similar to the Super DIRTcar Series. Britten has already parked his Troyer V8 Modified in victory lane more than 30 times in Australian competition.

The Aussie currently finds himself second in Super DIRTcar Series points, trailing only Billy Decker. Britten collected a fourth-place finish during the All-Star Weekend at Rolling Wheels Raceway, and in his first appearance at Orange County Fair Speedway in The Big Show III finished in third. The only race he didn’t finish in the top-5 thus far, Canandaigua Motorsports Park, he took the Bilstein Shocks Fast Time Award. Despite the success he’s found on the prestigious tour, he’s not content.

“Winning at Brewerton was the highlight of my career so far. When you talk to guys like Harvey Fink and some of the guys that have been around, it makes you really start appreciating what you’ve actually accomplished by winning over here,” remarked the proud driver.

With strong results, the Australian racing community is giving Britten as much support as possible.

“Now that I’m putting together a few good results this season it’s definitely drawing up more interest back home,” he said. “Just about everybody in the modified racing world is keeping tabs on what’s happening over here and how I’m doing and giving me a lot of support.”

With Cornwall Motor Speedway (July 3) and Rolling Wheels Raceway Park (July 4) next on the schedule, Britten is hoping to continue his success.

“I’m pretty excited to head to Cornwall, it’s one of the few tracks that we run that’s very similar to the Australian tracks I’m used to,” he said. “It definitely makes it exciting to go to a track where I’m a little more comfortable and more in my element. I really struggled at Rolling Wheels last year but I think running at Canandaigua Motorsports Park every Saturday has helped me with my confidence on the bigger tracks. I got fourth at Rolling Wheels back in May, so I’m hoping to run that well again.”

Britten will have some extra motivation for this coming weekend, as his father is making the trip from Australia to take in the racing action.

“He’s been having a bit of a hard time sitting at home and just hearing about how I’ve been doing,” Britten said. “He’s really wanting to come over here and help out and I definitely want to get some good results for him.”

Last season, the talented racer used a different skill set on the Big-Block Modified Super DIRTcar Series as he acted as crew chief for Rich Scagliotta.

“Helping Rich last year really helped me out this year,” he said. “I got to see the tracks and learn which tracks take rubber, which tracks are fast, what kind of lines to run them. Even though I’ve never raced at most of these tracks, I’ve been to almost all of them and have experienced the racing there.”

Britten credits Billy Colton of Troyer Race Cars for helping him in his blossoming career.

“My first V8 Modified championship came the first year that we got the Troyer. It’s a damn good car, and we’ve just been winning with it ever since.” Britten went on, “Billy Colton gave us a lot of help to get us going with the Troyer car and really helped with set-up tips.”

The young superstar is currently embarked in his third season of racing Big-Block Modifieds in the United States.

“After Jimmy Phelps came and raced for us for a few races (in Australia) I told Billy I was interested in racing some races in the United States,” explained Britten. “We managed to work out a deal with Troyer and H&H Motorsports, and ourselves to run five races in a short period of time and get a bit of experience.”

Fast-forward two years, and that experience has ballooned into Britten being viewed as a legitimate championship contender on the Super DIRTcar Series. Britten is determined to be one of the future stars of the sport, and his passion, drive and determination have him well on his way.

Catch Britten and the stars of the Super DIRTcar Series this holiday weekend July 3 at Cornwall Motor Speedway and July 4 at Rolling Wheels Raceway Park.