Britten Back in America 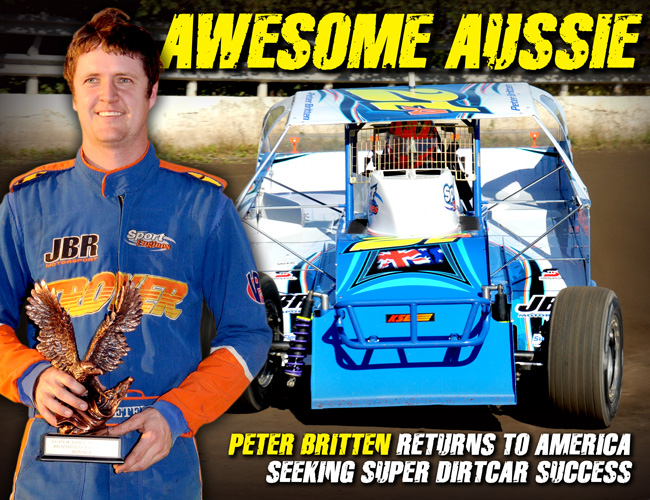 After father passes away, driver returns from Down Under this week for Canandaigua opener

CANANDAIGUA, N.Y. – April 5, 2012 – Drivers from throughout the Northeast will converge Saturday on Canandaigua Motorsports Park. No one, though, has traveled farther to race in this weekend’s Super DIRTcar Series opener than Peter Britten.

A native of Brisbane, Queensland, in Australia, Britten left home on Monday and 9,455 miles later arrived in New York ready to compete Saturday night in the Jan Corcoran Memorial.

This wasn’t Britten’s first journey across the Pacific. The past few years he’s been a regular DIRTcar Big-Block Modified competitor, and he had a solid Florida Tour in February at Volusia Speedway Park. Returning for the regular season, though, has never been more difficult than this year. Last month he lost his biggest supporter when his father, Paul, passed away, leaving behind not only Peter but his brothers, Kevin and Daniel, and his mother, Jane. His father was a popular figure in the management of Australian modified racing, and he was Peter’s biggest fan.

“It is a huge effort to get back and forth and all that stuff, and it’s a lot harder now that dad’s not around,” said Britten, 24. “I obviously wanted to keep going and keep improving, keep pushing myself, but he was always there in my corner, helping me get there. It’s definitely going to be pretty hard without him, but all we can do is keep going and try to make him proud. I’ll be doing what I can, that’s for sure.”

When Britten enters this weekend’s event, he’ll have the support of his close friends — almost a second family — in the Troyer Race Cars camp with Bill Colton and fellow driver Rich Scagliotta. In fact, the Brittens own a Troyer dealership in Australia and Peter is dating Colton’s daughter, Brittany.

“I’m pretty close to the Troyer guys and Billy Colton,” Britten said. “I’ve gotten to know their family a little bit since I’ve been over here. It does help having them around. Also, I’ve known Rich (Scagliotta) and Randie (Rudy) for a couple of years and we’ve become pretty close as well. It’s definitely good having a little bit of a support base around here, especially Rich and Randie. I go racing with them every week during the summer. They came to my dad’s funeral in Australia, and so did Bill and Brittany. That was good to get some support from them to come over and all that. It meant a hell of a lot. It’s easier than just being over here by myself, that’s for sure.”

So Britten has forced his focus onto this upcoming weekend, wanting to start the Super DIRTcar Series points chase with a strong effort at a track that although much different from those in Australia, it’s still a place where he’s comfortable, having set quick time in last year’s Jan Corcoran Memorial and finishing eighth in points while racing there weekly.

“Canandaigua is a big track and it’s really fast,” said Britten, who saw his first Super DIRTcar Series race in 2008 at Canandaigua. “Where I’m from, Brisbane in the Northeast of the country, and pretty much down the whole eastern side and the middle part of Australia, is all quarter-mile stuff. There really isn’t much big-track racing at all. You take Canandaigua into that and it’s definitely a bit different, but for whatever reason it seems to fit my driving style to some sort. I’ve had a bit of success there. I still haven’t managed to quite get a win there but I’ve had a lot of strong top-five finishes last year and I can’t see why I can’t crack a win this year. That’s what we’ll be pushing for.”

{vimeo}37410657{/vimeo}(Click to watch Peter Britten in action during the UNOH DIRTcar Nationals Presented by Summit Racing Equipment in February at Volusia Speedway Park.)

Coming off a seventh-place finish in the Super DIRTcar Series standings in 2011, Britten believes he can improve this season in his #21A Troyer now that he’s been through a full year of competition racing weekly and on the series.

“It’s definitely big to go out and run all the tracks for the first time and come back the next year,” said Britten, who also won the DIRTcar Futures Big-Block race during the 2011 Super DIRT Week at Syracuse. “You have more of an idea of the setup involved, just adapting yourself to be able to go to a foreign track and be quick right off the bat. That’s why the Sheppard and Phelps and Hearn are as good as they are. Obviously those guys have been to and raced every track around here at least a few times, but even when they go to a new track they can adapt their driving style right away. That’s something that only comes with a lot of time spent going to different race tracks and learning how to do that. Being able to pick up on setup and driving lines and all that at a new track is very crucial to being a good driver. It helps me now that I’ve had that experience last year. I’ll definitely be looking to improve on what I did last year.

“In my first year over here I raced weekly at Weedsport and at the start of the year I wasn’t real comfortable and didn’t do too well. Then toward the end of the year I started to get a few decent top-10s, I got into the top-five once. Last year I started off the year very strong and the mid part of the year I just sort of lost my way somehow, then I picked back up on it toward the end of the year. I think that had to do with a bit of experience. As the season started really getting going, whether it was the workload or whatever, the results just started falling away a little bit. Now that I’ve had that experience of doing a full Super DIRTcar Series and running two nights weekly, I’m looking forward to running this year. I know more about what needs to be done from a car preparation and setup point of view, and also running all those laps last year will put me in good stead driving this year. I’m definitely looking to get into victory lane this year and it would be really sweet to bring home a series victory. I guess we’ll take it as it comes and push it as hard as we can.”

One of life’s great healing powers for a race car driver is getting back in the car, back on the track. For Britten, that can’t come soon enough, but it’s obvious he’s excited to take the green flag on Saturday night at the track promoted by Jeremie Corcoran.

“I think the fans are going to be in for a treat, to tell you the truth,” he said. “Last year, this time of the year the track was really fast and very racy. If it’s that way again, it’s definitely going to be pretty interesting. Jeremie’s done a really good job at Canandaigua with track preparation and just the overall running of race nights. He’s just done a really good job there getting more sponsors involved and the crowds are picking up as well. That’s good on all parts. There’s going to be a lot of good cars and everybody is going to be trying to start off the Super DIRTcar Series with a win or a good finish. There’s going to be a lot of good racing out there.

“I remember, when I came over here in 2008, the first Super DIRTcar Series race I ever watched was at Canandaigua. The track was so big and so wide, and then you can race three- and four-wide pretty comfortably around there. I’m definitely expecting to see a bit of that. It should be exciting.”

WHAT: Jan Corcoran Memorial, the $6,000-to-win, 64-lap season-opener for the Super DIRTcar Series as well as the opener for Canandaigua Motorsports Park.

WHERE: Canandaigua Motorsports Park at the Ontario County Fairgrounds in Canandaigua, N.Y.