Brett Hearn Back On Top Of Advance Series Point Standings 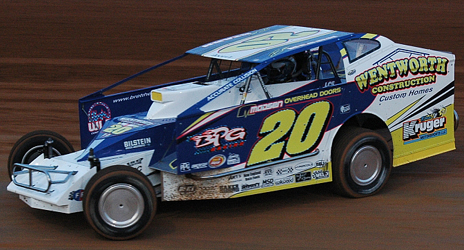 The 2008 Advance Auto Parts Super DIRTcar Series is just three races old and Brett Hearn is right where he wants to be. Although still in search of his first trip to victory lane, the defending overall Hoosier Tire Mr. DIRTcar Modified Champion is back atop the Advance Series Big-Block point standings with each finish among the front-five.

“We’ve got one of the most solid teams ever, I like where we’re at,” said Hearn, 49, as he prepared the potent Madsen Motorsports no. 20 Wentworth Custom Homes-Kruger-WLR/TEO entry for a return trip to Central New York when DIRTcar NorthEast charter member Cayuga County Fair Speedway (May 25) and Fulton Speedway (June 7) host rounds three and four in the 23-event Advance Auto Parts Series. He finished third in the tour opener at Virginia Motor Speedway on May 1 and followed up with second and fourth in the Twin 50s held at Rolling Wheels Raceway Park three days later.

“There are really no surprises in the points right now. Even after just three races all the guys I thought would be up front in the standings are already there. I think I have as good a shot as anybody, just need to make the right decisions and right adjustments at the right time. Anything small can turn out really big in a series like this with a lot of good teams wanting to be in the same place when its all over,” Hearn noted.

The all-time career win leader with 98 Advance Auto Parts Series triumphs, Hearn hasn’t cracked the winner’s circle at Cayuga County since 1993. When the 17th Annual Hall of Fame Classic arrives next week at Cayuga County the Sussex, New Jersey speedster will be looking for just his sixth top-five finish in the traditional holiday special.

“Obviously I would like to come out of there with a win but a top-three would be nice, too,” said Hearn, who posted a pair of runner-up finishes last year at The Port in four 53-lap features. An early race tangle with Sheppard in the Hall of Fame nightcap run in August relegated him to 25th before he settled for eighth-place in the initial race held over Labor Day Weekend. “I haven’t done as well at Weedsport as some other tracks but despite what people may think I still kinda like the place and enjoy running there.”

“What probably makes it the most challenging is a lot of the tour runners have also been regulars at Cayuga County. Track experience is always important so I think the guys that have more laps there have an advantage. I’ve raced (CCFS) enough to know what to expect, but again, it’s all the variables that have to be considered. And anything that can give you the slightest edge could be the difference between a win and a top-10 when its finally over,” Hearn figured.

New to Hearn —as well as both the track regulars and invaders expected to sign in for Cayuga County’s first of two Advance Auto Parts Series stops this season— is the 76-lap feature distance. Hosting the first of its 41 series shows in 1980, Weedsport tour races have been as long as 200 laps, with lengths corresponding to the current year determined throughout the 1990s.

“I like the different distance this year, with one race you know better where you stand,” said Hearn, whose last tour win at Cayuga County came in the 93-lapper held in 1993. With long-distance events his strength, the six-time Mr. DIRTcar champ finished fourth in the last 200-lap Modified main run at The Port in 1989. “And its always easier to make plans for one race instead of two.”

“Fulton has a 100-lapper and just like Cayuga County I think we’re due. We always race to win but when you can’t, staying up near the front is the next best thing. Consistency is still the most important part of the equation in this series. Last year we had a couple bad things happen early on so we’re already ahead of the game,” Hearn said.

Speedway pit gates at Cayuga County will unlock at 3:30pm on Sunday, May 25 and grandstands are scheduled to open at 5 o’clock. A special ‘Meet the Stars’ autograph session is slated for the frontstretch beginning at 6:30.

Contact Director of Competition & Track Sanctioning Cory Reed at the DIRTcar NorthEast Office (315/834-6606) or log into www.superdirtcarseries.com for additional Advance Auto Parts Super DIRTcar Series information. Cayuga County Fair Speedway www.cayugacountyfairspeedway.com is located at the fairgrounds on the east end of the village of Weedsport just one mile off exit 40 of the New York State Thruway. Contact the office at 315/593-6531 or the race line at 668-RACE for more information about Fulton Speedway www.fultonspeedway.com.