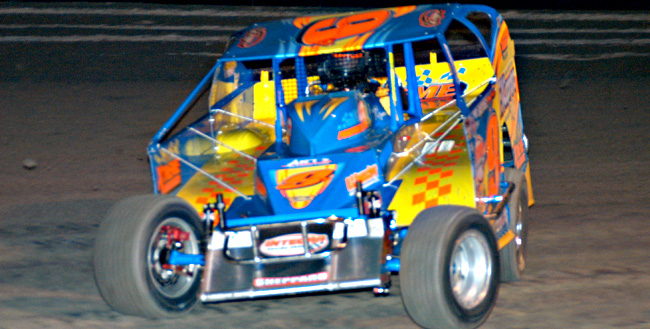 The competitors were divided into three groups and each received three hot-lap sessions between the event on a nice Tuesday evening at the semi-banked, half-mile dirt oval.

“You always want to come out of the box strong,” said Sheppard, who picked up a win last year at the UNOH DIRTcar Nationals Presented by Summit. “It’d be great to have a good showing down here.”

Pete Britten was the only other driver to break the 17-second mark with a lap of 16.986 seconds.

While Tuesday was a test-and-tune session, the competition runs Wednesday through Saturday to conclude the 41st annual UNOH DIRTcar Nationals Presented by Summit. It is also the season opener for the drivers in the muscled modifieds.

“This event for us is about a testing session and it’s about bragging rights and it’s about getting the season off to a good start,” Brett Hearn said. “This does carry some importance for us in that respect. It’s a great event for us to break out our new stuff and try to get a feel for what we’ve got going.

“It’s a momentum track. It’s also a driver’s track because the track is never the same two nights in a row and not very often is it the same throughout an entire night. It’s very much a thinking track, where you have to have a good car but you also have to have a thinking driver as well.”

Hearn, who broke out a brand new car for the event, overcame an early obstacle. His car was emitting an intense amount of smoke at the end of the initial hot-lap session and he hopped out of the car in the infield after the checkered flag as fire extinguishers were on the spot. However, he later made it back on the track and finished with the 10th-best time.

Veteran Jimmy Horton, who had the seventh-quickest time, previewed the next four nights as nearly three-dozen competitors chase the coveted gator trophy.

“It’s hard to say who’s the favorite because there’s so many good drivers here,” he said. “Brett (Hearn) is always one you’ve got to beat on to win. Bachetti, he runs good. And then you can take the dark horse of Jamie Mills. He always runs good here. And you can’t leave out Danny (Johnson) and myself. We’ve won down here before. So it’s going to be some good racing.”

Tickets for the remainder of the 41st annual UNOH DIRTcar Nationals Presented by Summit can be ordered online by clicking WorldofOutlaws.com/tickets, by calling 877-395-8606 or purchased at the track.