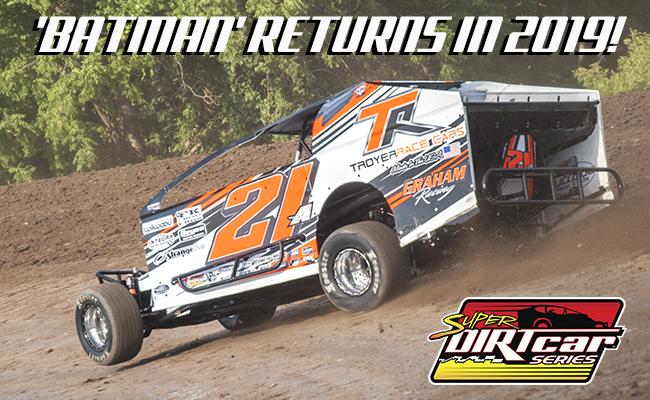 Column By: BOBBY CHALMERS / RPW – WEEDSPORT, NY – When the racing season ends, every driver feel like they could have improved. In the words of ‘Batman,’ Peter Britten, his year on the Super DIRTcar Series could have been better…well, that is, unless he was Matt Sheppard who was Champion yet again.

While Britten and his Graham Racing #21a team didn’t win on the series in 2018, they did take home 17 top 10 finishes with a best run of third in the Billy Whittaker Cars 200 during Super DIRT Week at the Oswego Speedway. There’s just something about putting clay on the ‘Steel Palace’ that suits Peter’s driving style. Hell, he nearly won that event back in 2017 as well.

“I’m definitely one who would like to see them put dirt down on Oswego for good,” Britten said. “I’d run there weekly if they did.”
Britten sure has figured out something with that speedway. Not only has he had success with the Big Block there, this past October, he also took home the Salute the Troops 150 358-Modified Championship during SDW.

“Some things just click every now and again,” he said. “Obviously, it’s a different race there. You can prepare a little differently for it and can use the practice sessions during the week to your advantage to tweak on your race car.”